Bread, Gold and the Nagant Revolver (Khleb, zoloto, nagan) is a Soviet 1980 action movie directed by Samvel Gasparov. The story takes place during the Russian Civil War. Olga Sokolova delivers bread to the starving children in an orphanage. Her companions are the Red commissar Vladimir Gorbach, the sailor Sasha Andronov and the chief of railway station Zaytsev who secretly carries three gold bars. The characters encounter various adventures on their way.

The following weapons are seen in the movie Bread, Gold and the Nagant Revolver (Khleb, zoloto, nagan):

A close view at the revolver. A plate on the grip is a sign of an award weapon (as it is told in one scene, Gorbach's Nagant is an award from the Chief of Cheka Felix Dzerzhinsky).

A Bulldog-style revolver is a backup weapon of Mezentsev (Eduard Martsevich), the chieftain of a gang of outlaws. 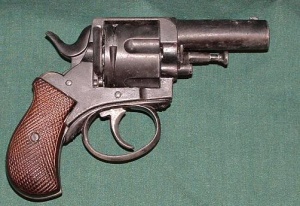 Mezentsev shoots a White Army officer with his revolver.

He throws the discharged revolver on the table.

Sasha Andronov holds his Mauser during the attack at the railway station.

Pashka the Gypsy holds his Mauser.

Mezentsev aims his Mauser at Gorbach.

A nickel plated Mauser C96 "Bolo" is carried by Mezentsev's bodyguard (Makharbek Kokoyev). After he is disarmed, his Mauser is used by Sasha Andronov (Yuriy Grigorev). 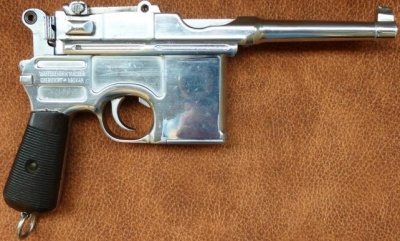 Mezentsev's bodyguard is armed with a nickel plated Mauser.

Andronov with Mauser in hand. A short barrel of "Bolo" model is seen. Next to him Stepan Zaytsev (Oleg Korchikov) readies Maxim M1910.

Most rifles in the movie are anachronistic Mosin Nagant M1938 Carbines. They are seen in hands of Red Army soldiers, White Army soldiers and outlaws.

The same character loads his rifle.

One of Mezentsev's men with M38 carbine.

The same character fires his rifle.

One of Mezentsev's men with a short rifle.

In the opening scene Sasha Andronov (Yuriy Grigorev) carries a rifle that later switches to a Mosin Nagant M1938 Carbine. It appears to be M91/30 rifle that has a broken or sawed-off muzzle part of the barrel. Same or at least very similar prop is seen in Propavshaya ekspeditsiya, filmed by same studio five years before.

A White Army soldier at the left holds a full-length M91/30 rifle.

Sawn-off Mosin Nagant M1891/30. In Russian such weapon is called "obrez" which means "cut". It was mostly used by criminals and rebels.

A Lewis machine gun is captured from Mezentsev's gang by Sasha Andronov (Yuriy Grigorev). It is original Lewis but this particular gun has a makeshift barrel cover and lacks a bipod but is fitted with a pivot. According to these features, it can be assumed that this machine gun is an aircraft mounted version of Lewis, visually modified to resemble a standard infantry version. Another guess is that it is simply a damaged piece that was very roughly repared on cinema factory.

A pivot can be seen.

Andronov carries his Lewis. A Maxim M1910 is seen next to him.

Another view at the Lewis.

A Maxim M1910 is mounted on a locomotive. The smooth water-jacket is typical for Maxims manufactured during the WW1 and in early 1920s.

A close view on spade grips of a Maxim mounted on a car.