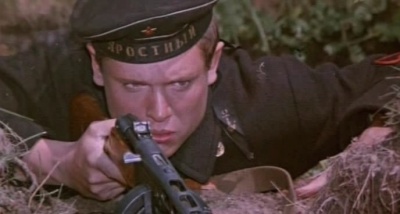 Boris Tokarev with PPSh-41 as Andrey Krotkikh in The Naval Mettle (Morskoy kharakter) (1970).

Boris Vasilyevich Tokarev (born August 20, 1947) is a Soviet and Russian stage and screen actor and film director. Starting his cinema career in 1959, aged 12, he appeared in many movies and TV mini-series. His most notable roles are Lt. Kuznetsov in Goryachiy Sneg (1972) and Sanya Grigoryev in Dva Kapitana (1976).