Blizzard of Souls, also titled The Rifleman, is a 2019 Latvian war movie directed by Dzintars Dreibergs and based on the novel of the same name by Aleksandrs Grīns. Latvia, 1915. 16-year-old Artūrs Vanags joins the Imperial Russian Army after losing his mother and home to war. But the hope of glory and the thrill of training is soon followed by the harsh reality of the battlefield. When the war seems to be coming to an end, there is a revolution in their own ranks. Artūrs now finds himself fighting in the midst of a brutal civil war, which makes the hope of peace and the liberation of his homeland a distant, almost futile, prospect.

The following weapons were used in the film Blizzard of Souls:

Nagant M1895 Revolver - 7.62x38R Nagant. This example was dated 1939 manufacture and was a wartime issued weapon. Note the angular front sight which was used from 1930s.

Vanags gives orders to flank the sniper with his revolver in hand. This revolver has an early rounded front sight.

Pinned down by machine gun fire, Edgars takes cover with his Nagant with a post-1930 angular front sight.

A Bolshevik officer with his drawn Nagant revolver.

Artūrs fires a Nagant revolver during the bridge defense.

Despite the fact that Latvian troops during WWI were not equipped with the Dragoon rifle, it is widely used by Latvian Riflemen in the film, including Artūrs Vanags (Oto Brantevics), Edgars Vanags (Raimonds Celms), Mikelsons (Jekabs Reinis), and Konrads (Gatis Gaga). It is still a more accurate choice than the M91/30 and Finnish M39 rifles seen in the first trailer.

Artūrs proudly inspect his newly-received Dragoon Rifle, which allows for a good view of the Konovalov sight.

He and other soldiers prepare their rifles to go over the top.

During the advance in the fog, Artūrs shows modern military trigger discipline, which would become standard practice many years after WWI.

The front part of Mikkelsons' Mosin Nagant as he and a German insult each other.

During marching, the bayonet is mounted upside down.

Latvian troops with their Dragoon rifles in Winter.

Artūrs offers a child his rifle.

Another child soldier aims his rifle at incoming German soldiers.

The Infantry variant of the Mosin Nagant M1891 is also used by Latvian infantrymen.

The second soldier from the left fires salute salvo with other soldiers.

A Bolshevik with his rifle over his back.

The same soldier with his Mosin Nagant.

Most German soldiers are armed with Gewehr 98s.

Two German solders at Artūrs' mother's house with their Gewehrs.

A close-up of the Seitengewehr bayonet that barely missed Artūrs' face.

A German soldier named Hans carries a Gewehr 98 over his back in a deleted scene.

An anachronistic scoped Karabiner 98k is used by the German sniper and later by Artūrs and his father. Some unscoped Kar98ks are also used by German and Latvian soldiers in mass scenes.

An abandoned Kar98k with a fixed bayonet on the right.

A distant view through the tall grass of the sniper's Karabiner.

The caught sniper tries to fire a warning shot.

There are scratches on the buttstock, to show how many kills he made with the rifle.

Artūrs aims the carbine at a German soldier, who stands on top of the edge of a trench as a punishment (a rather unlikely event).

What appears to be an anachronistic Turkish Mauser is briefly seen used by a child soldier.

The child soldier second in the foreground aims his Mauser. The front barrel is different from German Mausers.

...and the front barrel band.

One German soldier can be seen with an unknown Mauser-type rifle in a deleted scene.

The soldier on the right points his rifle at Artūrs; his mate to the left has a Czech Mauser.

A PM 1910 on the barracks' rooftop is used to shoot at a German airplane.

Two child soldiers repel a German attack with the Maxim.

Maxim MG08s on Dreifuß 16 tripods are used by German soldiers.

A Maxim next to its badly wounded user.

Artūrs takes a look at the dying soldier.

One German soldier hiding in a tree is armed with a Maxim MG08/15.

Shot and fallen from his tree, the dazed German keeps firing his MG 08/15.

Instead of accurate German stick grenades like the Model 15, 16, or 17, the post-war Model 24 Stielhandgranates are used, persumably standing in for their more historically accurate counterparts.

Artūrs pockets an M24 taken from a dead German.

Later the next day, he tosses it to Mikkelsons.

A Model 24 thrown by a German soldier in mid-air.

Artūrs and other Latvians use RG-14 hand grenades.

On the left, Artūrs carries an RG-14 into battle.

Shorty after, he primes his grenade.

A 12 Gauge Double Barreled Shotgun hangs on a wall in Artūrs' mother's home.

The shotgun is seen hanging on the left side of the entrance.

A German officer checks the shotgun.

Schwere Feldhaubitze 13 howitzers are seen in a German position and on a Bolshevik train. 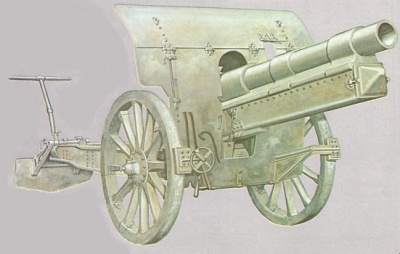 A line of sFH 13s in the German artillery position after the battle.

An Austro-Hungarian Romfell Panzerwagen supports German forces of the Eiserne Division (Iron Division) during the Latvian War of Independence in 1919.

The Romfell in the far distance; unlike the attack plane, it is not CGI, but a replica.

The plane flies over Latvian positions.
Retrieved from "https://www.imfdb.org/index.php?title=Blizzard_of_Souls&oldid=1453711"
Categories: