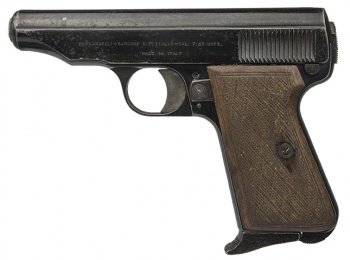 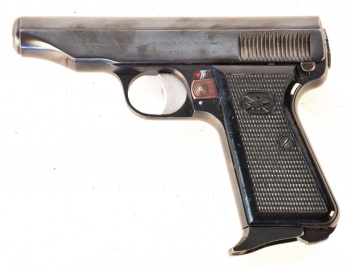 This pistol, manufactured by Vincenzo Bernardelli from 1947 until 1960s, has no specific name. As it can be seen in the original gun manual, the gun is identified only by the caliber, not even given a name or model. Reference books commonly name this model Bernardelli 7.65 or Bernardelli .32. While most production of the pistol was in 7.65mm (.32) caliber, versions in .22 and .380 calibers also existed.

Note: Other names that this pistol is sometimes referred as are Model 1947 (the year of the introduction to the market), Model 1948 (unclear reason) or "Pre-Model 60" (as this pistol was followed by Bernardelli Model 60). None of these were ever used by the manufacturer. "Bernardelli VT" or "Bernardelli Gardone VT" (because of the markings on the slide) are even more erroneous, as it means Gardone Val Trompia, the full name of the town that is a home for the gun factory.

The Bernardelli 7.65 and variants can be seen in the following films, television series, video games, and anime used by the following actors: