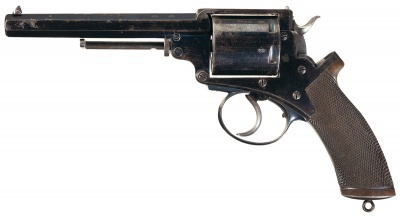 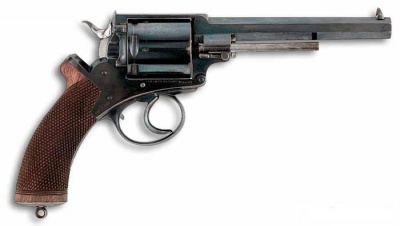 The Adams percussion revolver was the brainchild of British gunsmith Robert Adams, who received a patent for a new revolver design in 1851. The gun was a .436 5-shot DAO solid-frame revolver with a spurless hammer. The East India Company was the first to put the new revolver into service. British officers often purchased the Adams revolver privately while the Army waited until 1857 when an improved Beaumont-Adams version was adopted. Ten years later, it was replaced by .450 6-shot breach loading version, designed by Robert's brother John Adams.

Unusually for a firearm of their age, screen examples will likely be originals as reproductions are essentially non-existent. However no firing scenes with one are known to exist from a 21st century production, presumably due to this scarcity.

The Adams Revolver and variants can be seen in the following films, television series, video games, and anime used by the following actors: