The following weapons were used in the film Bad Moon: 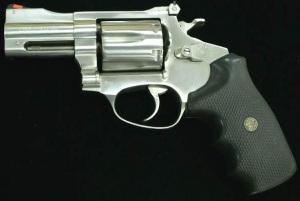 Janet fumbles with the Rossi Model 971, debating whether to take it.

Janet rushes to arm herself.

In the prologue of the film Uncle Ted (Michael Paré) uses a Mossberg 500 with a telescopic scope to fend off the werewolf.

In the prologue of the film the Sherpa guides are armed with Brown Bess Flintlock Muskets.

A Sherpa armed with a musket.

view of the receiver
Retrieved from "https://www.imfdb.org/index.php?title=Bad_Moon&oldid=1023540"
Categories: