Assault on the Secret Police (a direct translation of original Latvian title Uzbrukums slepenpolicijai, Russian title Napadeniye na taynuyu politsiyu) is a Soviet Latvian 1976 (filmed 1975) historical adventure movie directed by Olgerts Dunkers and based on a novel by Alberts Bels which is in turn loosely based on actual events that happened in Riga in January 1906, during the Russian revolution 1905-1907. One of the leaders of Latvian Social Democratic revolutionaries, Janis Luters (Girts Jakovlevs), who poses as a merchant Adolfs Karlsons, is arrested by police and hold in the Riga Police Department building (in the movie - "Secret Police Department"). A group of revolutionaries commits the assault on police and releases Luters.

Note: the movie was released only on VHS hence the mediocre quality of the film.

The following weapons were used in the film Assault on the Secret Police (Uzbrukums slepenpolicijai):

Gendarmes Rotmistr (Capt.) Kramerov (Gunars Cilinskis) carries a Nagant in holster. A Nagant in hands of his aide is seen at the background.

A Russian Army officer holds a Nagant during the police raid in Madame Treivogel's (who is a revolutionary Austra (Mirdza Martinsone)), salon.

A barrel of a Nagant of Kramerov's aide is seen in center.

A Nagant-wielding guard in police department is shot by Luters during the prison break.

An Army officer holds a Nagant. The lanyard is seen.

A Gorodovoy (policeman) holds a Nagant. The lanyard is seen.

An FN Model 1900 pistol is used by a secret police agent Spicausis (Vaironis Jakans) to assassinate a police official in order to blame the revolutionaries. Possibly this is the same nickel plated pistol that is seen in several other Riga Film Studio productions, like Death Under Sail. 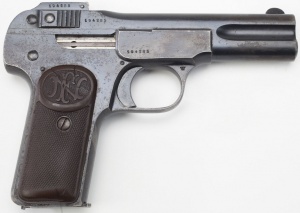 Spicausis, posing as a revolutionary, aims his pistol at police official Tomashevich (uncredited).

Another view of Spicausis' pistol.

Rotmistr Kramerov (Gunars Cilinskis) "finds" the murder weapon during the search in salon.

Anachronistic CZ 27 pistols (probably a single prop reused in several scenes) are seen in hands of Janis Luters (Girts Jakovlevs) and of several secret police agents. Possibly this is the same gun that is seen in several other Riga Film Studio productions, like Unfinished Supper (Nezakonchennyy uzhin). 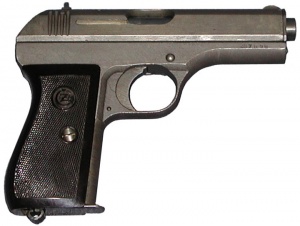 A secret police agent, posing as a revolutionaly, aims his pistol at the conductor of the tram while Spicausis assassinates a police official.

Luters' pistol and a cartridge clip on table.

...and puts it in his suitcase.

An equally anachronistic Mauser M1934 pocket pistol, hidden in a loaf of bread, is sent to Janis Luters (Girts Jakovlevs). The shape of the slide serration matches M1910/34 version in 6.35mm (.25 ACP) caliber. 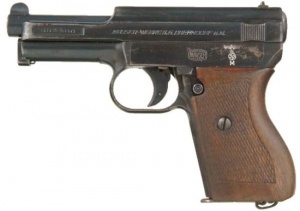 "Dashing" puts the pistol into the loaf of bread.

Luters takes the pistol from the bread.

He fires at a guard.

Luters holds his pistol after the successful escape.

Another view of "Dashing"'s Mauser (at the left).

"Dashing"'s Mauser on the table.

Straume holds a policeman at gunpoint.

"Dashing" (at the left) and Martins (at the right) dual-wield Mausers.

A soldier at the right carries an M91 rifle.

A firing squad with M91 rifles during the mock execution of Janis Luters.

A soldier at the left carries an M91 Infantry rifle while a soldier at the right - M91/30 rifle.
Retrieved from "https://www.imfdb.org/index.php?title=Assault_on_the_Secret_Police_(Uzbrukums_slepenpolicijai)&oldid=1341546"
Categories: