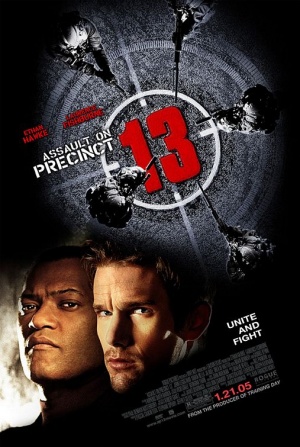 Assault on Precinct 13 is the 2005 remake of the 1976 John Carpenter thriller. The remake was directed by Jean-François Richet and changes the setting from Los Angeles to Detroit.

The following weapons were used in the film Assault on Precinct 13 (2005):

Sgt. Jake Roenick (Ethan Hawke) carries a stainless Para-Ordnance P-13, a high capacity .45 semi-auto as his sidearm in the film. 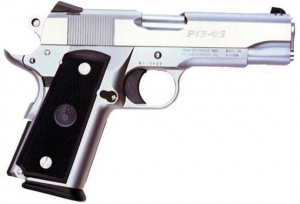 Roenick's P-13 laying in the snow as he fights with one of Duvall's men near the bus.

Roenick firing his P-13 out a window.

Roenick fires the pistol. The slide doesn't seem to cycle, indicating that this is likely a flashpaper-style replica.

Roenick walks through the woods cautiously with his P-13 drawn towards the end of the film.

Closeup of Roenick's P-13 as he walks through the woods. 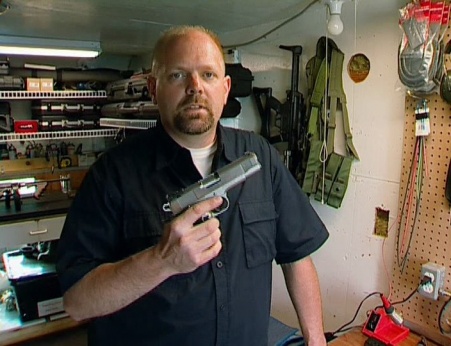 Charles Taylor shows off the Para Ordnance P-13 used by Ethan Hawke in the movie. 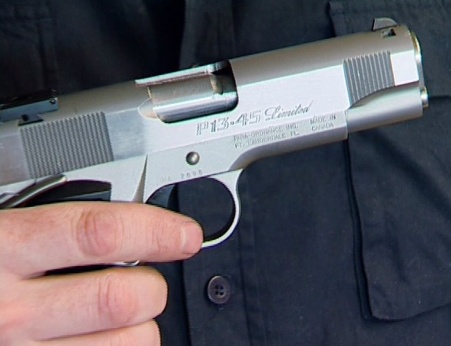 Sgt. Jasper fires his 92FS out a window.

Sgt. Jasper (Brian Dennehy) holds the Beretta 92FS while in a standoff.

A corrupt cop opens fire with his pistol.

Iris Ferry (Drea de Matteo) holds the Beretta while in a standoff.

Roenick flicks the safety off on the Beretta 92FS held by Sabian (Maria Bello).

Mike Kahane (Currie Graham) with a 92FS towards the end of the movie.

Marion Bishop (Laurence Fishburne) is carrying a two-tone SIG-Sauer P226 during the confrontation at the church. 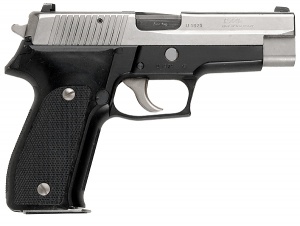 Bishop fires his P226 in the air in the church to create a distraction.

Bishop about to drop his P226 after being surrounded by police. 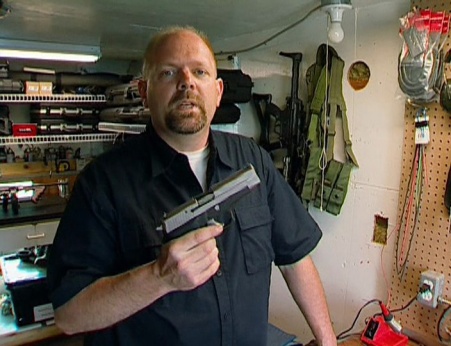 Armorer Charles Taylor shows off the two-tone SIG-Sauer P226 used by Laurence Fishburne in the movie. 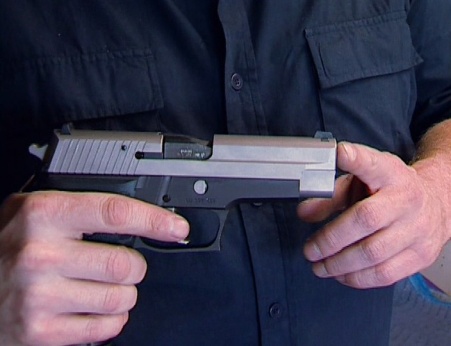 Closeup of the two-tone P226. Note that the ejection port has been filed down to allow firing of blanks.

Beretta 92FS Inox handguns are used by the two Serbian gangsters in the beginning of the film. One of Bishop's men also uses one at the church.

Milos (Titus Welliver) fires his Beretta Inox while fleeing from Roenick and his unit.

One of Bishop's men fires at the police with a Beretta Inox.

A crooked cop holds a Para-Ordnance Carry during a confrontation with Bishop in a church. 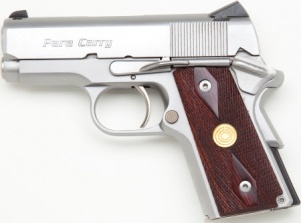 A crooked cop pulls a Para Ordnance Carry on Bishop in the church. 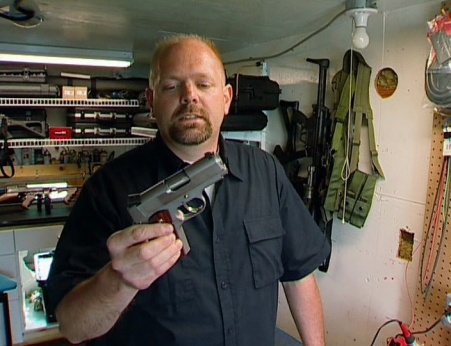 Armorer Charles Taylor shows off the Para Ordnance Carry used in the movie.

One of the weapons in which Marcus Duvall's (Gabriel Byrne) men use are Heckler & Koch MP5A3 submachine guns fitted with suppressors, laser sights, and Surefire weaponlights.

One of Duvall's men opens fire with a Heckler & Koch MP5A3 fitted with a laser sight, suppressor and Surefire weaponlight. 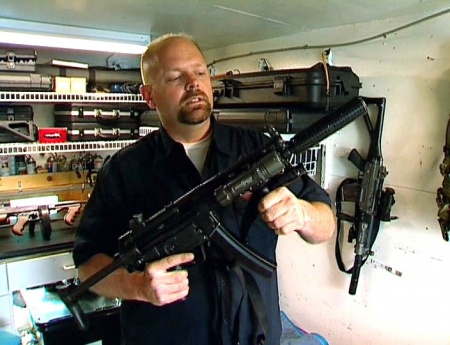 Charles Taylor shows off one of the Heckler & Koch MP5A3s used in the movie.

At the beginning of the film, Sgt. Jasper (Brian Dennehy) can be seen examining and joking about an M1928 Thompson found in the evidence room. Anna (Aisha Hinds) also takes this weapon for her own use later in the movie. 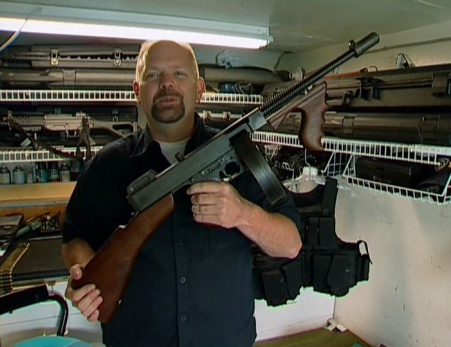 Charles Taylor shows off the "Tommy Gun" used in the film.

Roenick grabs an SG 552 off the body of one of Duvall's men.

One of Marcus Duvall's men goes down armed with the SIG carbine. Note the muzzle flash when a killer falls.

Bishop about to take down one of the men wielding the SIG.

Bishop (Laurence Fishburne) with a SG 552, notice how there's no trigger guard.

Good shot of a SIG SG 552 being wielded by one of Duvall's men in the forest. 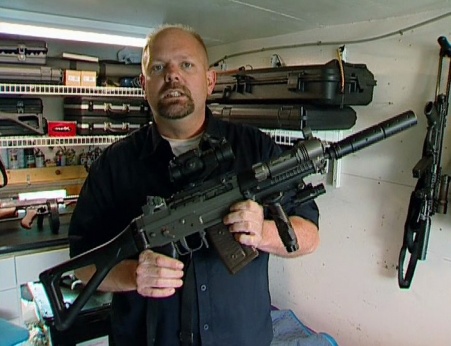 Charles Taylor, the armorer of the movie, shows off one of the SIG SG 552s used in the movie. 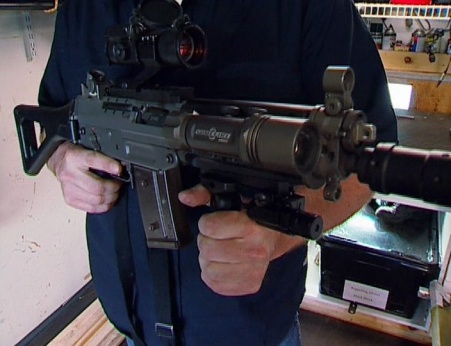 Closeup of the SIG SG 552 used in the movie.

Another weapon in which Marcus Duvall's men use is the Accuracy International AWP sniper rifle. One of the snipers seen is film armorer Al Vrkljan, who often appears in cameos in such films as The Incredible Hulk and The Sentinel.

One of Duvall's snipers readies his L96A1.

One of Duvall's snipers aims his L96A1.

Another sniper aims his L96A1.

A view through the sniper scope on Smiley (Ja Rule).

A Detroit officer standing guard is seen armed with a Mossberg 500AT shotgun while Bishop is escorted to the prison bus.

A police officer armed with a Mossberg 500AT escorts Bishop to the prison bus.

One of Duvall's men armed with a Mossberg 500 with an extended magazine tube.

Closeup of the pump action on the Mossberg 500 before he uses it to breach a door.

Wayne County Deputy Rosen (Kim Coates) and Deputy Gil (Dorian Harewood), the guards on the prison bus, are seen carrying Remington 870 shotguns in addition to their Berettas. Roenick also carries a Remington 870 in some scenes.

A closeup of the 870 that Officer Rosen (Kim Coates) aims at Beck, demanding he sit back down.

Roenick holds an 870 on Bishop.

One of Duvall's has an M203 grenade launcher on his Colt Model 727, which he fires at the Precinct with blinding and deafening results.

Closeup of the trigger of the M203 before he fires.