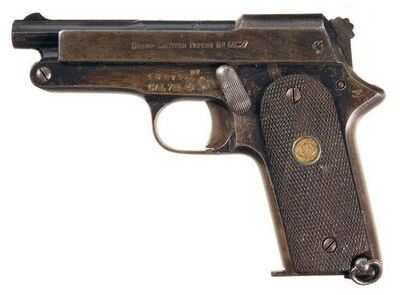 The Arrizabalaga Sharp-Shooter was manufactured by Hijos de Calixto Arrizabalaga of Eibar, Spain. It has a unique method of loading, in that the slide cannot be pulled back by hand. To load, the safety lever is pivoted backwards to unlock the barrel, which is tipped up for direct loading of a cartridge, then the hammer is cocked manually. After the first shot has been fired, the pistol functions as a semi-auto pistol.

In the 1920s, a new variant would be introduced, designated the "JO.LO.AR" (after the man behind the idea, Jose Lopez Arnaiz); this version lacks a trigger guard, and features a folding lever attached to the left side of the slide to allow one-handed racking. This variant was more successful than the original, being adopted by the Peruvian mounted police force; both compact models akin to the original Sharp-Shooter and larger-framed variants in larger calibers (namely 9x23mm Largo, and a few in .45 ACP) were produced.

The Arrizabalaga Sharp-Shooter and variants can be seen in the following films, television series, video games, and anime used by the following actors: