The following weapons were used in the film Armored: 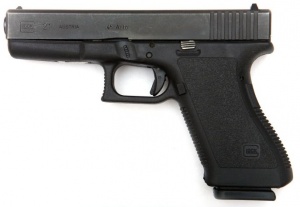 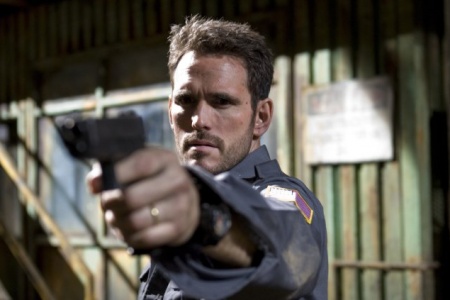 Matt Dillon holds a Glock 21 in a promotional still for the film.

Mike Cochrone holds his Glock 21 near the beginning of the film.

Quinn fires his Glock out of frustration.

Palmer holds his Glock at Hackett.

Officer Jake Eckehart (Milo Ventimiglia) carries a Beretta 92FS as his sidearm in the film. When Eckehart is shot, Quinn (Jean Reno) picks up the pistol, but it is never seen again.

Eckehart keeps his hand on his sidearm while he talks to Cochrane.

A bank guard has a holstered SIG-Sauer P226 near the beginning of the film.

The bank guard with his holstered SIG.

Baines (Laurence Fishburne) carries a Benelli M4 Super 90 shotgun with an extended magazine tube as his primary firearm in the film. He describes the weapon as an "M4 Benelli scatter-gun...state-of-the-art" before stating that he wishes someone would attempt to rob them so he would have an opportunity to use it. Even though this design is a semi-auto shotgun, the post edit sound of when Baines was handling it made it seemed like it had a pump action sound and the same sound persisted when he retracted the stock. 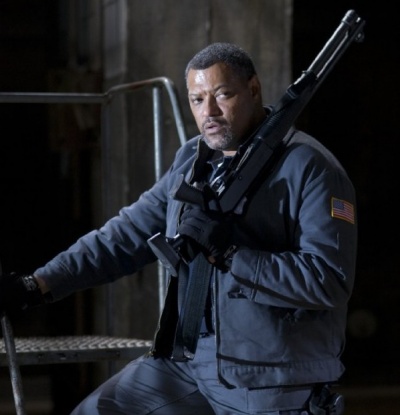 Laurence Fishburne holds the Benelli M4 in a promotional still for the film.

Baines shows off his Benelli shotgun.

Baines mimics firing the shotgun in the locker room.

Baines fires the shotgun at a hobo.

Dobbs (Skeet Ulrich) uses a 12 Gauge Double-Barreled Sawed-Off Shotgun during a robbery prank near the beginning of the film.

Dobbs takes cover with his "lupara" in hand.

Dobbs holds his shotgun after the prank.

Officer Jake Eckehart (Milo Ventimiglia) has a Mossberg 500 shotgun in his patrol car.

Bank guards are armed with M4A1 Carbines when the money truck crews arrive to pick up the money.

Guards armed with the M4A1.

Several shotguns can be seen in a gun cabinet in the Eagle Shield armored transport headquarters. A couple of Eagle Shield employees are also seen with unidentified shotguns.

Several shotguns are visible to the left.

A man cleans a shotgun.