Angels & Demons is the 2009 feature film adaptation of the Dan Brown bestseller of the same name. While the novel was a prequel to The Da Vinci Code, this film takes place after the 2006 feature. Tom Hanks returns as Robert Langdon and Ron Howard returns as director and the duo would be reunited for the third film in the series: 2016's Inferno.

The following weapons were used in the film Angels & Demons:

SIG-Sauer P226 is the standard issued sidearm of the Vatican Gendarmerie and the Swiss Guards. Inspector General Ernesto Olivetti (Pierfrancesco Favino) and Lieutenant Chartrand (Thure Lindhardt) both used P226Rs. Also, Professor Robert Langdon (Tom Hanks) uses Chartrand's P226 to shoot out the airtight glass. In reality, the Vatican Gendarmerie (actually issued Glock 17s) have no authority on Italian territory and they are not allowed to carry weapons or lead operations on it, except for specifically organized circumstances. 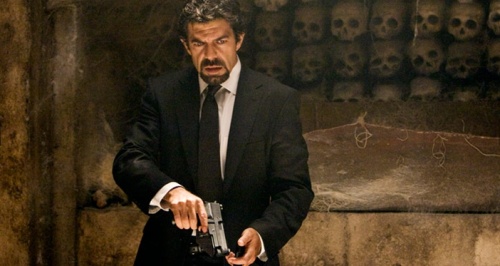 Inspector Olivetti with the SIG P226R.

Closer view of above scene.

The Italian Carabinieri are armed with the Beretta 92FS.

An Italian Carabinieri officer holds his Beretta 92FS on one of the Antagonists.

A Carabinieri officer with a Beretta 92FS.

A suppressed Glock 19 is used by the Assassin (Nikolaj Lie Kaas) throughout the film.

The Assassin fires his Glock 19.

The Assassin reaches for his Glock 19.

The Assassin holds his Glock 19 on an Italian Carabinieri officer.

A Beretta M12 is very briefly seen in the hands of a Carabinieri officer.

Heckler & Koch MP5A3s as well as A2s were seen in the hands of Carabinieri GIS operators and Swiss Guards. The MP5s used by the GIS have laser and tactical light attachments.

Laser sight attachment on the MP5.

A police sharpshooter can be seen armed with a Heckler & Koch G3SG/1 overlooking Saint Peter's Square.

Police Sharpshooter with the G3SG/1.

View through the optic mounted on the G3SG/1.

The FN SCAR is also present in the armory.
Retrieved from "https://www.imfdb.org/index.php?title=Angels_%26_Demons&oldid=1434118"
Categories: