American Soldiers: A Day in Iraq 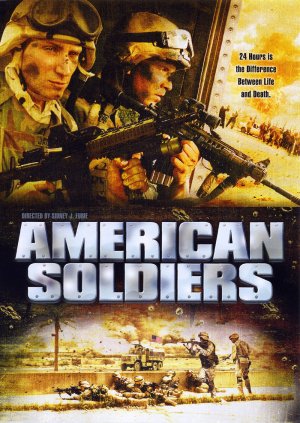 American Soldiers: A Day in Iraq (which also was released under the title American Soldiers) is a 2005 Iraq War film directed by Sidney J. Furie (Iron Eagle). Based on a true story and set in April 12, 2004, the film follows the story of a small patrol unit from the 1st Calvary, US Army, as they endure that hardships of patrolling the streets of Baghdad while holding off several attacks by insurgents.

The following weapon appear in the film American Soldiers: A Day in Iraq:

The Beretta 92FS, standing in for the standard issue Beretta M9, is carried by most of the American soldiers, also by Lt. Ahmed (Vince Salonia) and the undercover insurgent dressed as an Iraqi police officer. 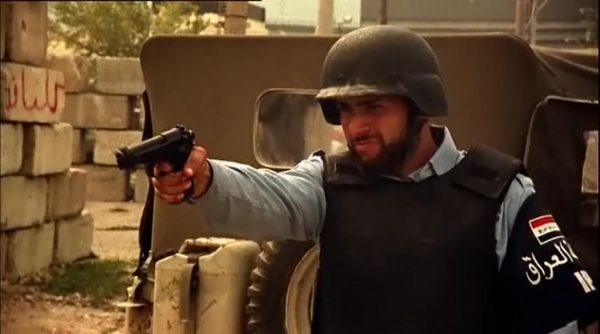 The undercover Iraqi insurgent fires a Beretta 92FS while been chased by Lt. Ahmed. 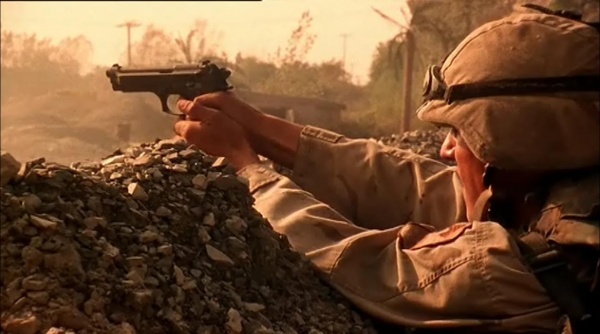 PFC Romeo (Brett Ryan) firing a Beretta 92FS during the final battle, after running out of ammo for the his M727.

The M1917 Revolver is used by an Iraqi police officer during one of the raids on the police station. 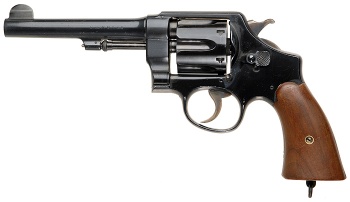 The AK-47 is carried by Iraqi insurgents.

The AKMS is seen fired by an Iraqi insurgent during the final battle, before been killed by SPC Tyler Jackson (Curtis Morgan). 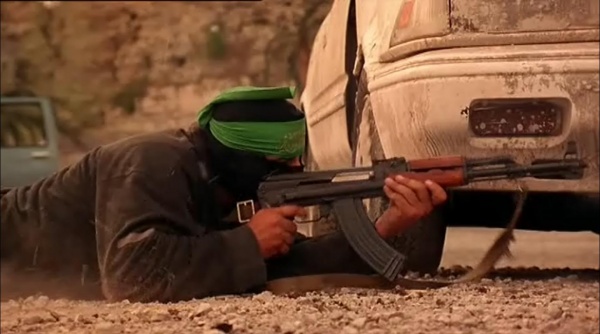 An Iraqi insurgent firing an AKMS, before been killed by SPC Tyler Jackson (Curtis Morgan). Note the headband, typical of a member of Hamas' Al-Qassam Brigades

PFC Dowdy (Paul Sturino), SPC Cohen (Jordan Brown) and SPC Romeo (Brett Ryan) all carry the Colt Model 727 carbine as their primary weapon. Dowdy and Romeo have standard M727 with a M203 grenade launcher attached while Cohen has a custom variant, fitted with a KAC M4-style railed handguard, a SureFire WeaponLight, RIS foregrip and a Magpul M93 Modular buttstock. The use of the M727 is probably likely standing in for the M4A1, which was the primary weapon of most front-line US soldiers in 2004. 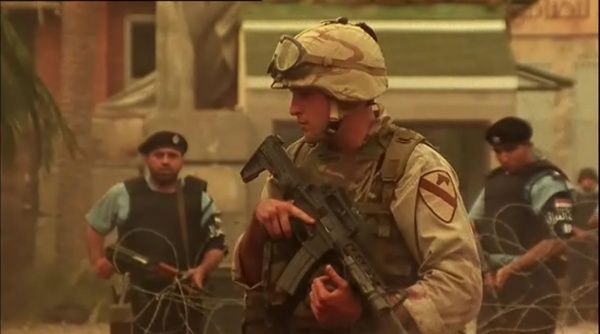 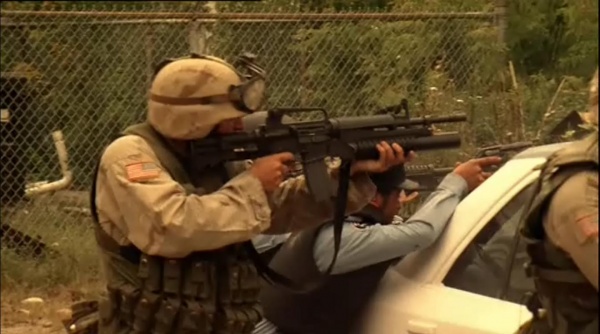 The M4A1 is carried by SGT Delvecchio (Zan Calabretta), SGT Ron Stalker (Shaun Taylor), PFC Johnson (Michael Belisaro), and PFC Aikens (Ben Gilbank). Both Delvecchio's and Stalker's M4A1s are fitted with an A.R.M.S. SIR system (which is not used by regular infantry troops), a vertical foregrip, an Aimpoint M68 CCO, and a SureFire WeaponLight, while both Johnson's and Aiken's M4A1s has the same configuration only without the S.I.R. system. 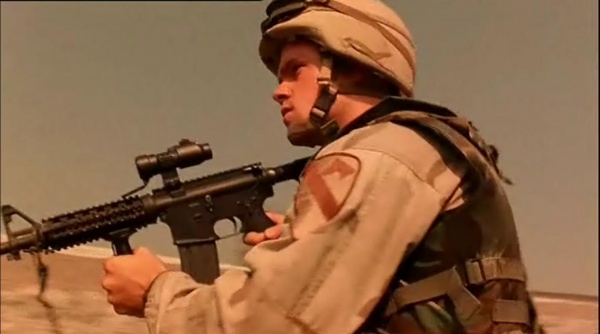 PFC Aikens with his M4A1. 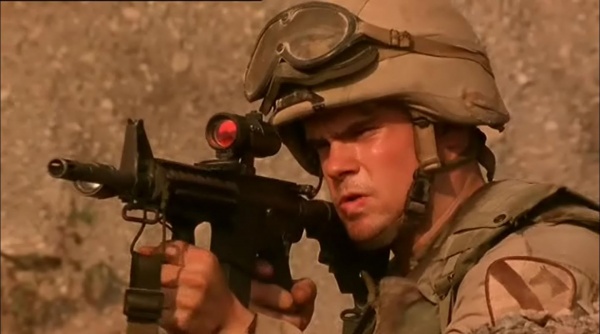 Another shot of PFC Aikens firing his M4A1 at Iraqi insurgents during the final battle. 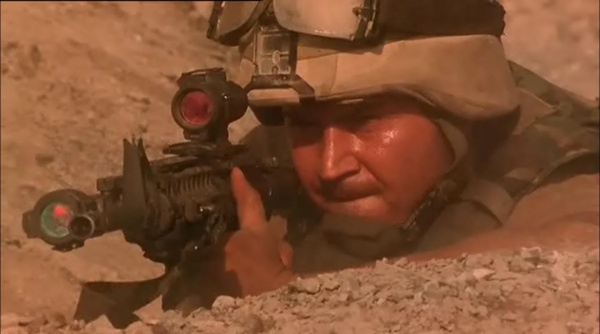 SGT Delvecchio firing his M4A1 at Iraqi insurgents during the final battle.

The M16A2 is carried by LT Diggs (Jason Matheson).

The M16A4 is carried by SPC Deke Carver (Philippe Buckland), fitted with a Trijicon TA11 3.5x35 ACOG, a 20-round magazine and a Harris bipod, making him the squad's designated marksman. Another M16A4 is carried by LT Banning, a guard in the prison and by an Iraqi insurgent during the last battle. Both Banning's and the insurgent's M16A4s are fitted with a C-More red dot sight. 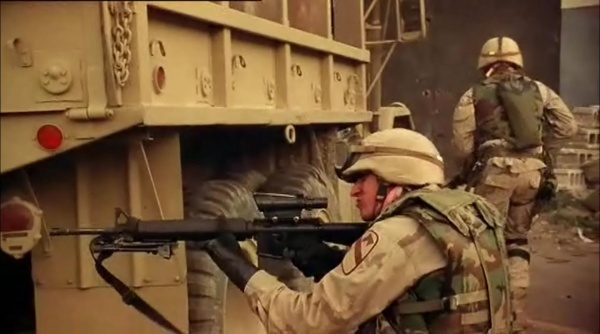 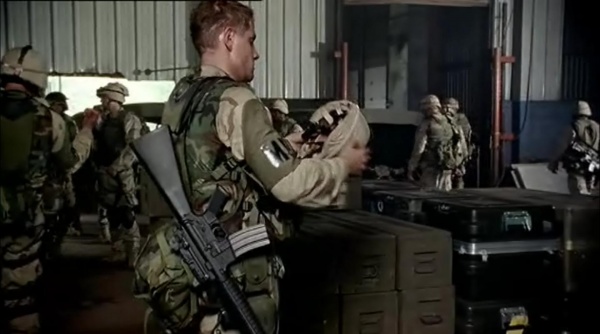 LT with his M16A4 strapped behind his back. Note the C-More red dot sight mounted on the top of the upper receiver. 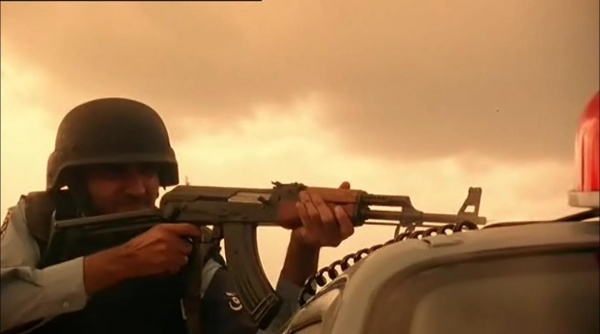 An Iraqi policeman firing a Type 56-1 at Iraqi insurgents while assisting the escape of the American soldiers. 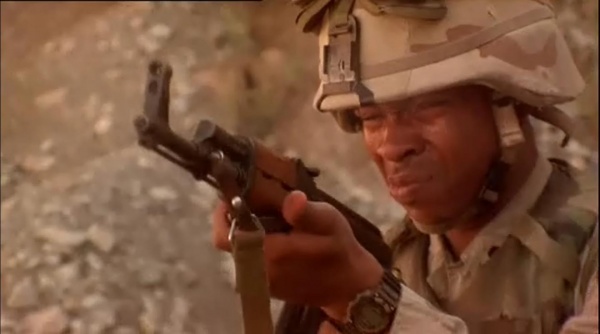 SPC Tyler Jackson firing a Type 56-1 which he commandeered from an Iraqi insurgent.

The Browning M2HB is mounted on the M35 truck and fired mainly by PFC Aikens (Ben Gilbank). 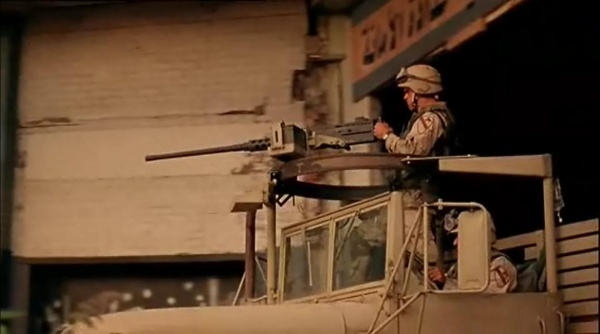 PFC Aikens is manning the M2HB 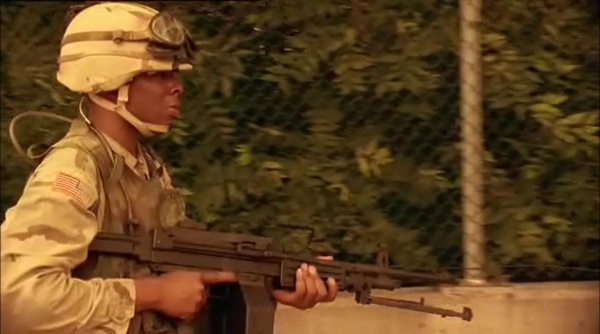 SPC Tyler Jackson holding his Daewoo K3 in the beginning of the film. Note the proper trigger discipline. 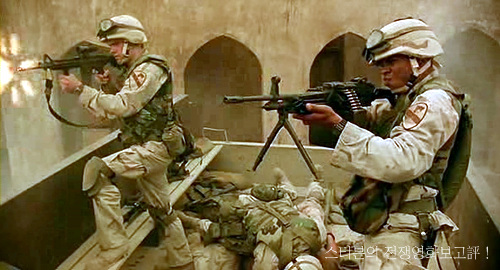 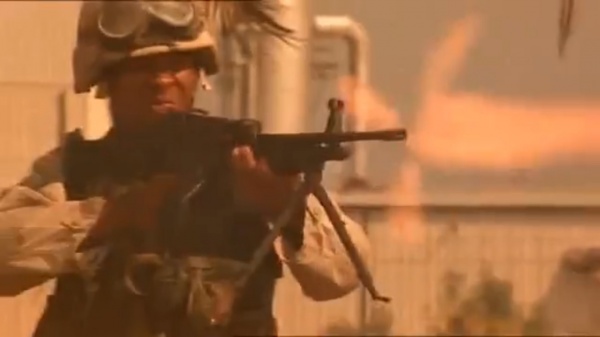 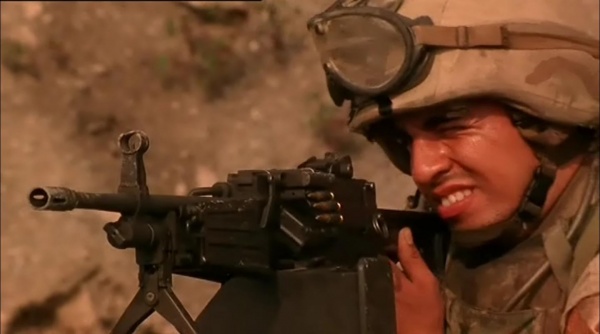 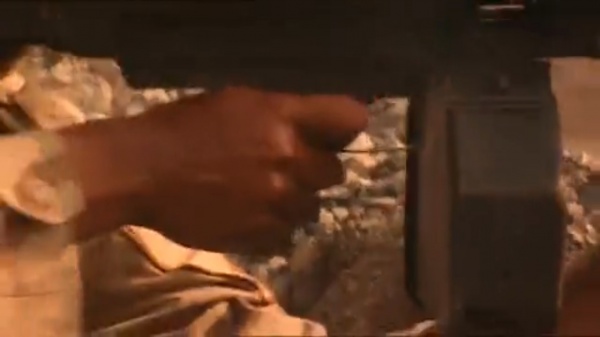 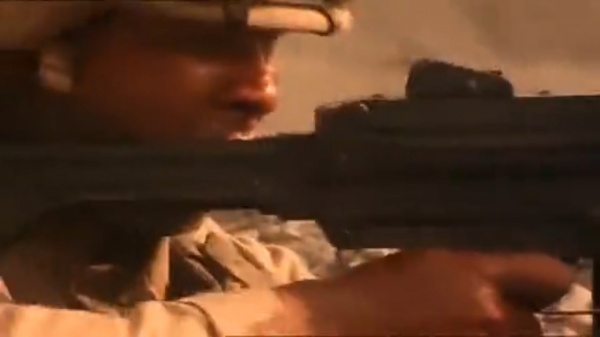 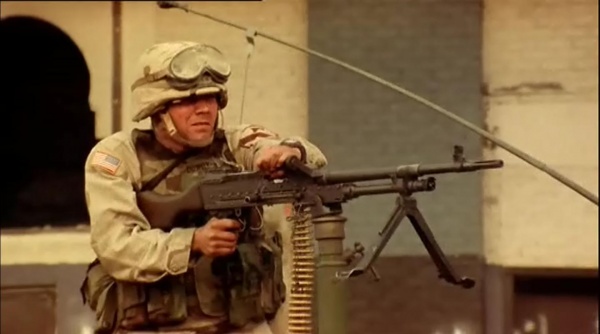 The M60 is carried and used by Lt. Ahmed (Vince Salonia), and saying that he obtained it from the black market. 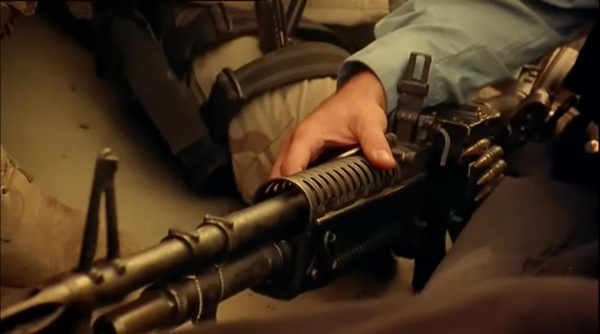 The RPG-7 is seen fire many times by an Iraqi insurgent, both on the American soldiers and Iraqi police. SGT Delvecchio briefly uses it to blow up an Iraqi insurgent's mortar unit on a truck during the final battle. 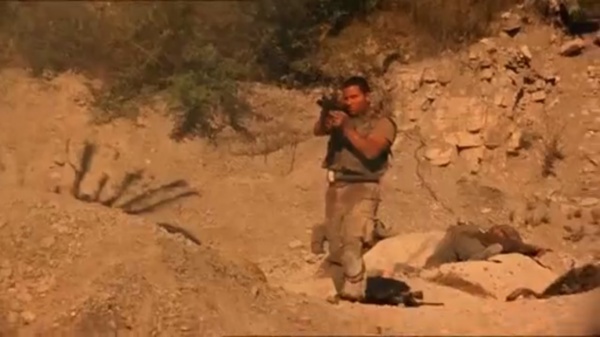 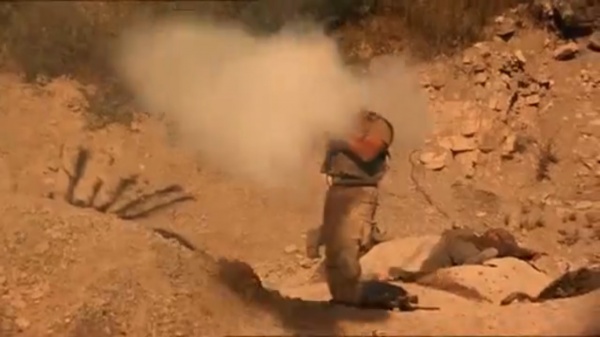 The SPG-9 is mounted on a light truck and used by Iraqi insurgents while attacking the police station. 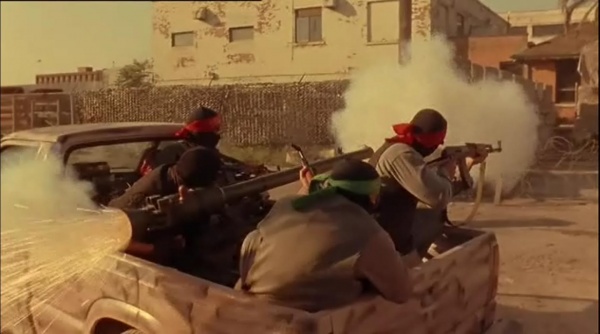 Iraqi insurgents firing a SPG-9 at the police station.

An unidentified mortar mounted on a truck is used by the the Iraqi insurgents' mortar unit during the final battle. 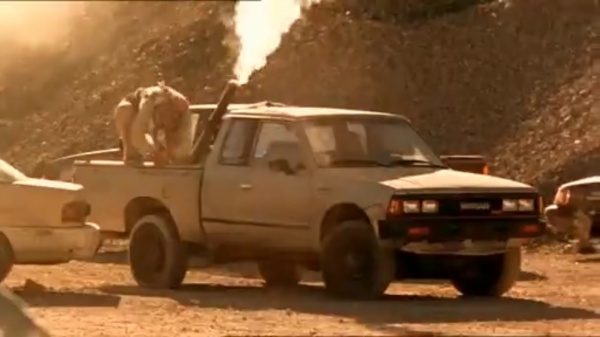