Abang Long Fadil 2 is a 2017 Malaysian action comedy film directed by Syafiq Yusof. It is a sequel to the 2014 film Abang Long Fadil. The film stars Zizan Razak, Syamsul Yusof, Dato' AC Mizal, Wak Doyok, Shuib Sepahtu, Achey Bocey, Tania Hudson, A. Galak and Mas Khan. A story about Fadil who fall into mafia world led by Taji Samprit and his son Wak Doyok. An incident causes Detective Inspector Wahab and Detective Inspector Shuib to suspect Fadil as Tiger, a professional assassin. In the meantime, Yana who is a TVKL reporter that has done coverage on Tiger's assassination was stuck in the crisis that Fadil are facing. Though he is not a murderer, to solve the crisis Fadil lead the life as professional assassin and attack King Kong which is Taji Samprit's partner in crime who turns to become his enemy. Actions and comedies happen in Fadil's life as professional assassin in his way to clean his name and in finding Tiger's true identity.

The following weapons were used in the film Abang Long Fadil 2:

Beretta 92FS Inox is seen on display at the armory wall. This gun is never uses it.

The Beretta 92FS is seen on the armory wall together with Beretta Inox (in the right).

Beretta 92FS and Beretta Inox can be seen in the armory. The majority of these guns in this film were actually airsoft weapons.

Beretta 92FS Inox is used by Taji Samprit (A. Galak). Later, Fadil and Doyok (Wak Doyok) also uses one during the final assault.

Taji Samprit (A. Galak) holds the Beretta Inox to eliminate his son, Doyok.

Taji holds his Beretta Inox to the throat of Doyok.

One of the Taji's bodyguards point his Beretta Inox to Fadil when he threats Taji.

Doyok aims his Beretta at Fadil as Fadil points the Glock 18C to him.

Fadil aims the Beretta Inox to Doyok as Tiger threating him with AKS-47.

Beretta Inox (in the right) and Beretta 92FS can be seen in the armory. The majority of these guns in this film were actually airsoft weapons.

Wahab holds the Px4 Storm during the final assault.

Wahab fires the Px4 Storm to eliminate Ali when he attempted to kill him. 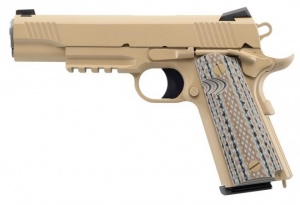 Cobra open fire with his M45A1.

Cobra reloaded his M45A1 as Fadil, Ali and Yana escape from their TVKL car wreck. 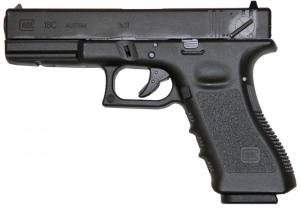 Glock 18C (3rd Generation) - 9x19mm. This model has compensator cuts on the slide and barrel to reduce muzzle climb while firing

Shuib fires the Glock 18C at Ali during the final assault.

Yana (Tania Hudson) aims the Glock 18C at Tiger to prevented him to kill Fadil.

Pairs of Glock 18C can be seen in the armory wall.

The pairs of the Glock 18C can be seen on display. 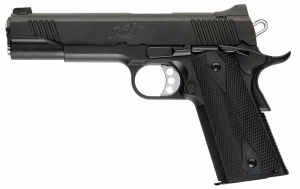 Kimber Custom TLE II - .45 ACP
This version has no rails and is the version used in the Television series The Unit

A Kimber Custom TLE II in the hand of a dead Mona. 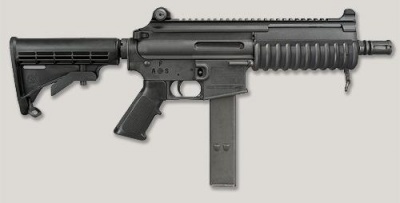 Police patrolman with 9mm Carbon 15 during investigate to find out the container where the Taji's money was hidden.

Heckler & Koch MP5A3 submachine guns are used by police Special Squad operators when they capturing Fadil in hotel, escorting him and a final shootout.

One of Special Squad police unit with MP5A3s surround Fadil in a lobby.

Type III AKS-47 are used by Ali (Achey Bochey) when he identified himself as Tiger, the deadly assassin. In the scenes, these weapon is an airsoft rifle.

Tiger points his AKS-47 at Fadil.

Pairs of AKS-47 can be seen in the armory wall.

Heckler & Koch G36C are used by police Special Squad operators. In the scenes, these weapon is an non firing replica.

Special Squad members in the left holds the G36C during the raid in a hotel lobby.

An M4A1 carbines fitted with M203 grenade launcher are mounted on the armory wall. These weapon actually is an non firing replica.

An M4A1 carbines fitted with M203 grenade launcher mounted on the armory wall is seen pick-up by Fadil before switched to Colt Model 933.

Cobra loads the 40mm round into the M203 before shootout started.

A pairs of M16 aka SP1 rifles are mounted on the armory wall.

Two Accuracy International AW sniper riflea are seen on display in the armory while Fadil visited the Doyok's luxury house. 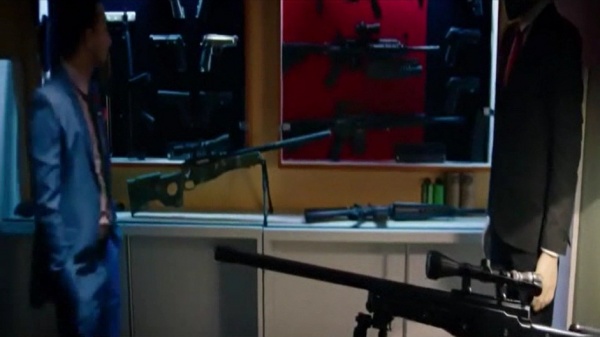 Two AW rifles on display in the armory.
Retrieved from "https://www.imfdb.org/index.php?title=Abang_Long_Fadil_2&oldid=1439835"
Categories: