Based on the eponymous semi-autobiographical novel by Philip K. Dick released in 1977, A Scanner Darkly is set in a dystopian Anaheim, California (the original novel was simply set in the wider "Orange County" with no further specification), amidst an alternate future where the USA has lost the war on drugs and is facing addiction rates of more than 20%, prompting the authorities to create a surveillance state and a network of undercover informants. Into this world of addiction is thrust Bob Arctor, an undercover cop by who is ordered to infiltrate the local subculture in order to uncover the source of drug named "Substance D," a hallucinogenic substance that causes initial euphoria, but which eventually changes to paranoia and then permanent brain damage. Becoming addicted to Substance D first as a means of maintaining his cover, Arctor slowly begins to lose his grip on reality and his memory as the drug wreaks its havoc on his brain, and must try and accomplish his mission as he becomes less and less sure who or what to trust.

Note: Due to the interpolated rotoscoping process (where animators take a live-action film and draw over it, digitally or manually, to produce animation) used in this film, firearms depicted in this film sometimes have their details wash out or disappear into flat colors from frame to frame, or even change proportion. The number of screenshots for each weapon here are intended to display this effect and to make identification easier. Ostensibly this rotoscoping process (previously used by this film's director in an earlier picture of his, titled Waking Life) was chosen to emulate the warped perception of reality experienced by users of mind-altering-substances, of which the fictional Substance D is one. To that end, proportions of shaded areas on some objects, their sizes, and the general perspective of onscreen locales are all occasionally seen to warp and change size during the course of the film. Unlike its more famous genre-mate Fear and Loathing in Las Vegas, this film is relatively lacking in outright-unreal moments, but some memorable hallucinatory sequences (such as Arctor hallucinating that his housemates have turned into giant bugs or Charles Freck meeting a "creature from between dimensions") are included in this film.

Weapons are listed on this page in the order that they appeared in the movie. Additional screenshots may be found on the talk page.

The following weapons were used in the animated film A Scanner Darkly:

Charles Freck, a regular visitor to Arctor's house, drives to meet James Barris early in the film, and upon seeing a passing police car, begins hallucinating that he is being pulled over and arrested by a traffic cop (portrayed by Steven Chester Prince), all the while suffering a severe episode of "formication" (the sensation of insects crawling on or beneath one's skin). The cop carries a Glock 19 during this hallucinatory sequence, based on the length of the barrel/slide and relative size of the bore. 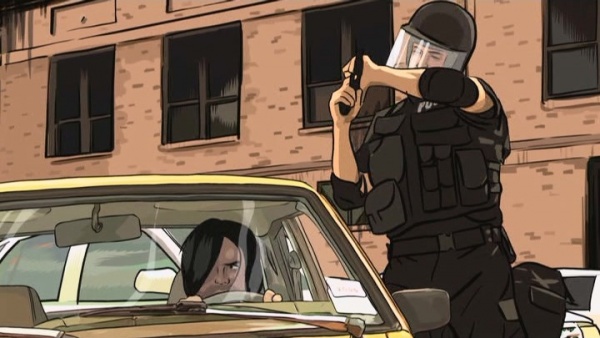 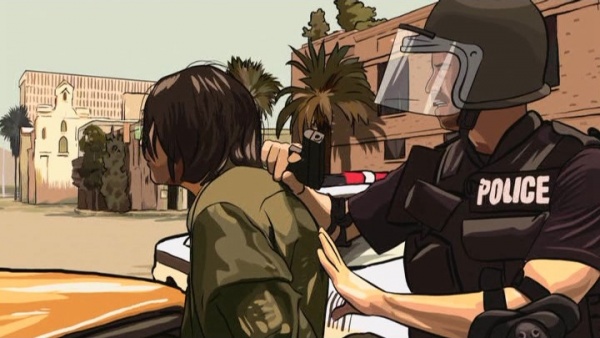 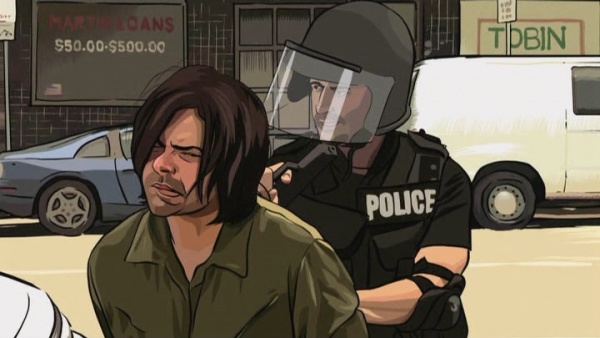 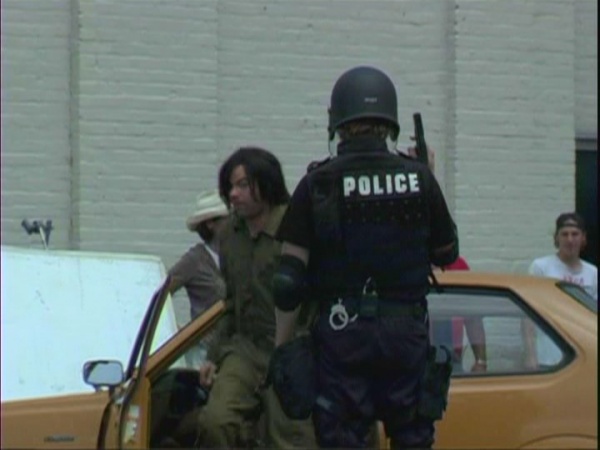 A production shot of the "traffic stop" scene, pre-rotoscoping. The relatively short slide/barrel, especially the part that extends past the trigger, can be seen here.

James Barris, one of Arctor's housemates, carries what appears to be a Clerke First .32 revolver in the film, and uses it in a scene where he tests a makeshift "silencer" that only ends up making the gun louder. Befitting a paranoid and twitchy junkie with delusions of grandeur, he appears to have no grasp of the concept of trigger discipline either. In the book, Barris instead used a "funky .22 single-action German-made nowhere pistol" that cost "about 30 dollars used," beyond which no other details were mentioned, not even if it was a revolver or otherwise. 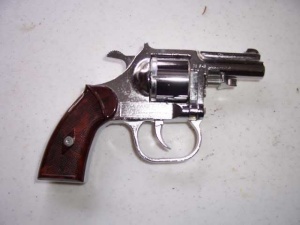 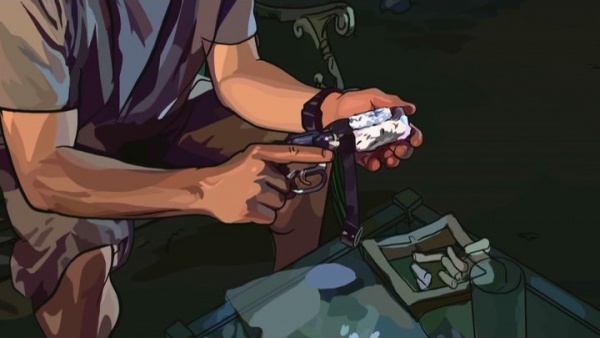 Barris: "Gentlemen, you are about to witness, for approximately 61 cents of ordinary household materials, the perfect home-made silencer."
As in the book, the "silencer" in this movie is made out of aluminum foil and a piece of foam rubber, though the materials cost only a total of 11 cents in the novel. 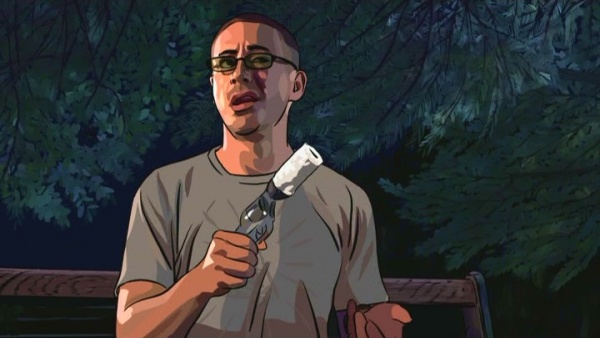 Barris: "In this day and age, the type of society we find ourselves living in, every person of worth needs to have a gun at all times to protect themselves."
The rotoscoping in this shot washes out much of the revolver's detail, but a possible reason for this low level of detail follows below. 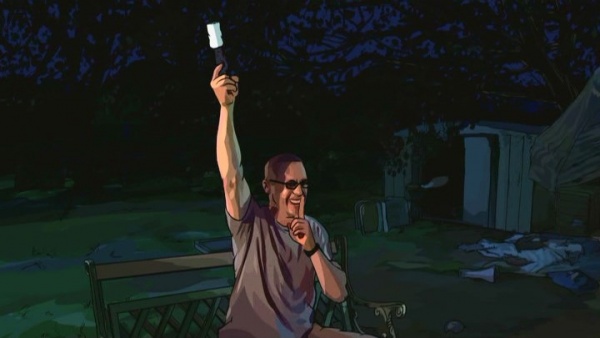 Barris prepares to give his makeshift "silencer" a "live-fire" test, after pointing it at Freck, Luckman, and then himself. 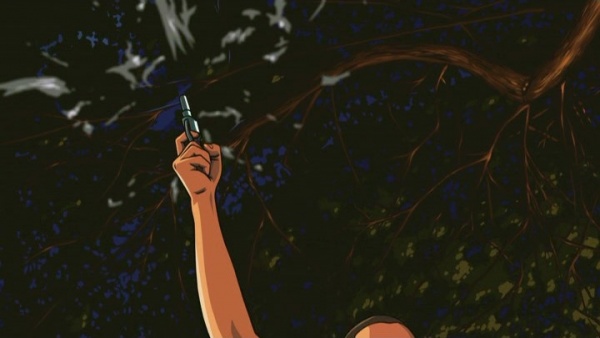 The "silencer" disintegrates upon firing. Given the dangers of bore obstruction from such an improvised "silencer" possibly causing an explosive malfunction, this sequence was likely entirely animated. 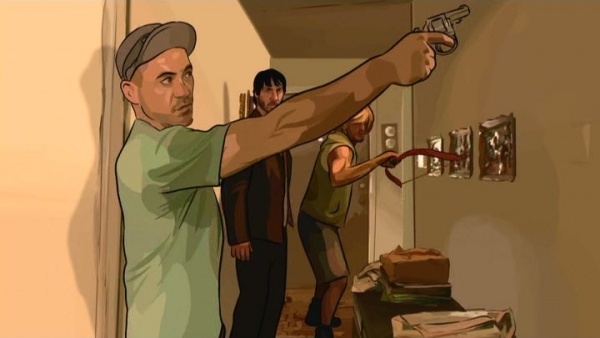 Arctor, Luckman, and Barris attempt to clear their shared house after a suspected break-in, Barris' revolver at the ready and Luckman with a child's bow (but no arrows). 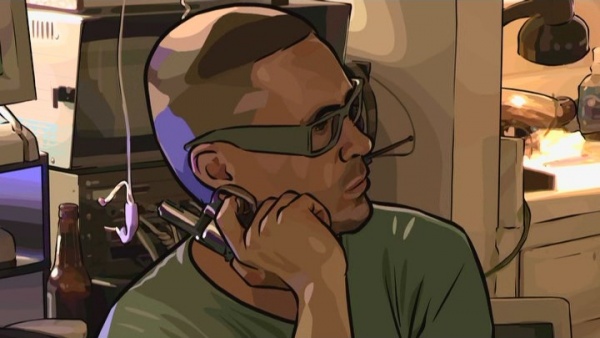 Barris in the middle of making excuses for his incompetence, after nonchalantly using revolver's barrel to push the buttons on a homemade security system, something that goes against one of the basic rules of firearms safety. 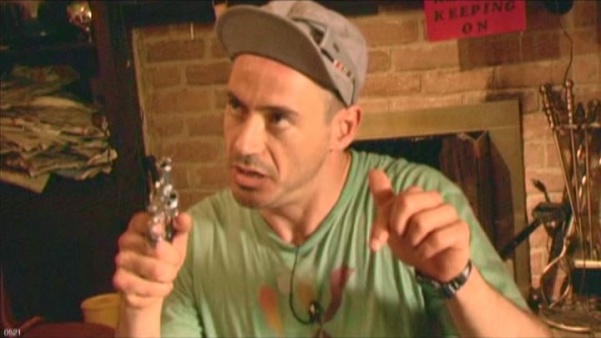 A production shot of Robert Downey Jr. with the Clerke First .32 before the rotoscoping process was added. The higher detail in this shot seems to show that the gun was, in fact, unloaded (possibly for the actor's safety given the character's disregard for trigger discipline), a detail that was subsequently covered up by the rotoscoping process. Its cylinder layout appears to be of the 5-shot type. 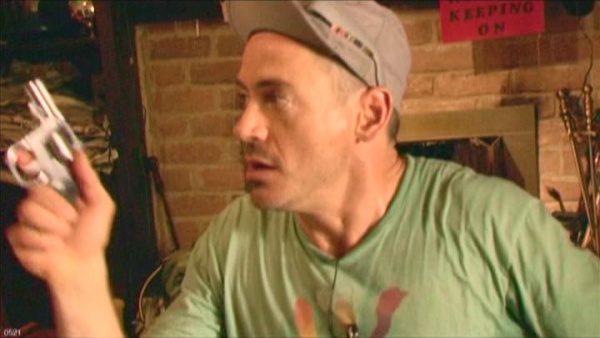 Another production shot of Robert Downey Jr. with James Barris' revolver, showing more detail on the gun's ejector rod, squared-off frame above the trigger, and barrel length. The lack of an ejector shroud, the frame shape, and the shiny finish suggest its identity as a Clerke First .32 revolver and not a H&R revolver of any type.

Bob Arctor, being an undercover cop, reflexively draws a Beretta 92FS from under his bed after hearing James Barris test out a "silencer" for the latter's revolver. It is never fired and does not appear after this scene in the film. Its appearance in this film may be a reference to Keanu Reeves' more famous use of the weapon in the first film in the Matrix movie series, given how "out-of-his-element" Reeves' characters act in both films.

In the book, Bob Arctor carried a ".32 police-special revolver," the make and model of which are never elaborated upon. Arctor in the book keeps the gun under his pillow instead of under the bed as in the film, and also keeps it in his car's glove compartment while driving. 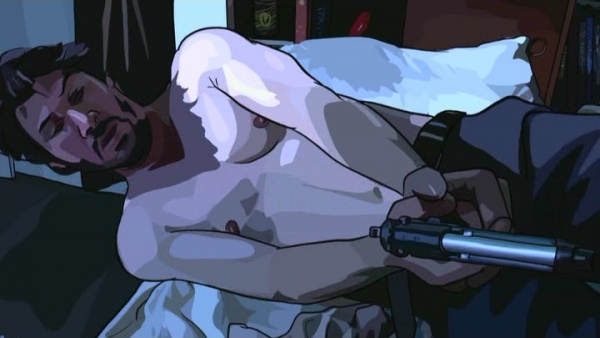 The clearest view of Arctor's Beretta 92FS, as he whips it out from under his bed after being jerked awake by Barris' gunshot. 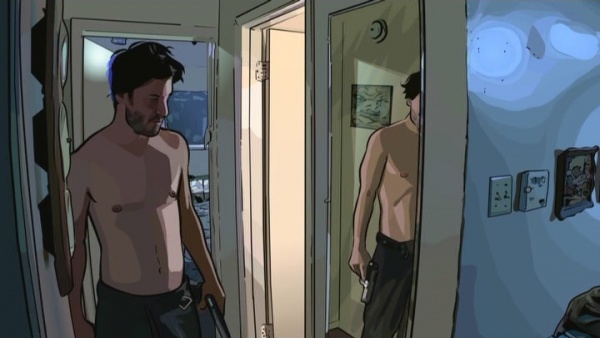 Arctor: "What happened? How'd I get here?"
Arctor contemplates the sorry state of his life circumstances while investigating the source of the gunshot he heard. Shortly afterwards he witnesses Barris testing the "second prototype" of his "silencer." The rotoscoping process washes out the detail in this shot, most likely due to the subdued lighting in the original film print.

In a scene original to the film and not found in the book, Alex Jones (a controversial conspiracy theorist and media pundit in real life) has a short cameo as a "Street Prophet" who harangues passersby via megaphone about the government's possible complicity in the Substance D addiction pandemic and the dangers of the increasingly intrusive surveillance state shown throughout the movie. He is then subsequently incapacitated by police officers who then drag him into a van, not to be seen again in the film. The police officer (portrayed by an uncredited extra) who shocks Jones into compliance is seen carrying an AK-style Carbine, possibly an AKS-74U but with black furniture and no buttstock.

The whole scene is witnessed by Bob Arctor, who, like the other witnesses of the scene, shows no reaction, leaving open the question of whether or not the scene was in fact real, or just another Substance-D-induced hallucination on Arctor's part.

Despite being credited as a "Street Prophet," Alex Jones is in fact mentioned by name on a magazine headline briefly seen in the film (he is apparently "running for office" in this film's timeline), so it might be more accurate to say that he simply portrayed himself in this film. 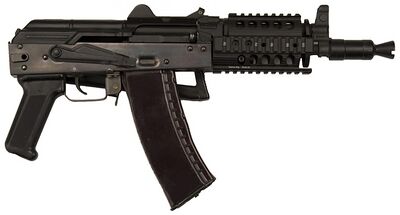 AKS74U with RIS handguard - 5.45x39mm. This is an actual movie gun from the inventory of Weapons Specialists, Ltd. in New York. 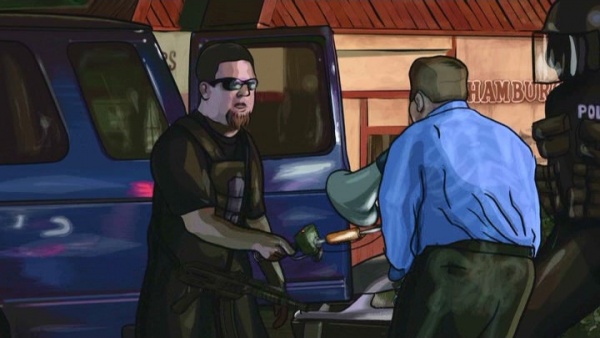 Alex Jones being unceremoniously shocked by what appears to be a makeshift cattle prod (Jones' skeleton can be seen superimposed over his rotoscoped form in this shot). The lack of a buttstock/buffer tube, plus the AK-style gas tube above the carbine's handguard and the curve of the magazine all point towards it being an AKS-74U. 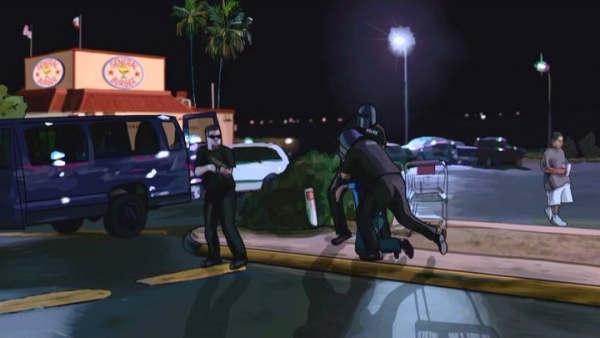 The police officer then readies his AKS-74U as Alex Jones is dragged into the police van.
Retrieved from "https://www.imfdb.org/index.php?title=A_Scanner_Darkly&oldid=1480932"
Categories: