A Most Violent Year

A Most Violent Year is a 2014 action crime drama directed by J.C. Chandor (Triple Frontier). The story is set in New York in 1981, the most violent year in the city's history and focuses on the struggles of Abel Morales (Oscar Isaac) and his wife Anna (Jessica Chastain) in the management of their heating oil business. Under investigation by the city for shady business practices, Abel is put under an increasing amount of pressure as the result of an expensive deal for company expansion and a spate of violent hijackings plaguing his drivers. As the hijackings become more brazen and the losses become greater, Abel struggles with the decision to fight violence with violence, keep his business afloat, and keep his family intact.

The following weapons were used in the film A Most Violent Year:

Catherine (Giselle Eisenberg) plays with a gun who she found on the pavement near the house.

Her mother Anna (Jessica Chastain) confiscates the pistol. The pistol appears to be a 1911 variant in this shot (note the combat-style hammer).

Anna shows her husband the new "toy" their daughter found.

Anna with the Browning Hi-Power.

Abel (Oscar Isaac) takes up a Hi-Power from one of the thieves' trucks.

Abel catches one of the thieves and puts the pistol to his head. 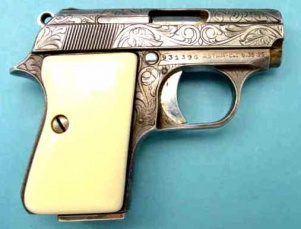 Anna shoots a wounded deer in the night on the road.

Abel holds the pistol. It appears best to be a Astra Cub in this shot.

Abel with the pistol.

Julian (Elyes Gabel) and John Dominczyk (Matthew Maher) are armed with a 1911 pistol similar to the Springfield Armory Mil-Spec M1911A1. 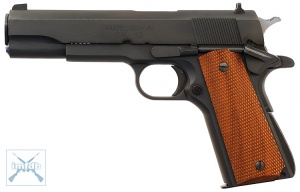 The Springfield Armory Mil-Spec M1911A1 in Julian's hand is fitted with a combat-style ring hammer.

Julian fires his gun during a shootout on a bridge.

Julian (Elyes Gabel) puts the gun to his head.
Retrieved from "https://www.imfdb.org/index.php?title=A_Most_Violent_Year&oldid=1260728"
Categories: