A Dear Boy (Russian: Дорогой мальчик, Dorogoy malchik) is a 1974 Soviet music comedy. A group of gangsters kidnaps George Rob-Robson, the son of a millionaire, to get a ransom. However, everything as usual does not go as it should, and with him they also accidentally capture by mistake a son of a Soviet diplomat, Zhora Timokhin. Realizing their mistake, the scammers decide to return Zhora. However, Zhora was not going to leave a friend in need behind...

The following weapons were used in the film A Dear Boy (Dorogoy malchik):

The Colt M1911A1 pistol seen during George's nightmares. Police officers also carry M1911A1 pistols in the end of the movie, but there are no good high-quality shots where they are clear.

The Colt M1911A1 fires in the George's nightmares.

Note the blank-firing adapter in the barrel.

Frank (Rasmi Dzhabrailov) throughout the film carries the FBP m/948 submachine gun and fires it afterwards during the car chase.

George captures Frank's FBP. (SPOILER! Highlight to see description)Unfortunately, however, the gun is not loaded.

The Walther MPL submachine gun appears during the TV reportage about the attack on the bank.

Walther MPL seen on the TV screen, in the police car.

In a deleted scene, Jacqueline (Iren Azer) is seen with M1928A1 Thompson submachine gun. This scene was not included in the movie, although a cartoon M1928A1 appears on the film poster. 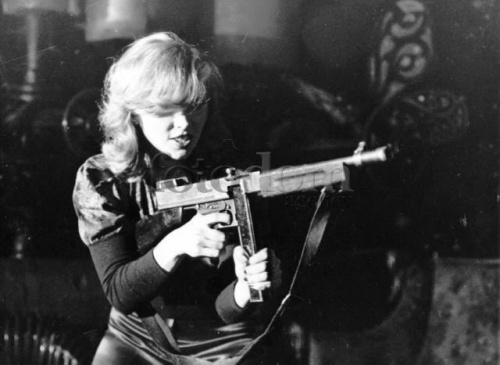 Thompson in deleted scene in the hands of Jacqueline.
Retrieved from "https://www.imfdb.org/index.php?title=A_Dear_Boy_(Dorogoy_malchik)&oldid=1464632"
Categories: