A Clockwork Orange is director Stanley Kubrick's controversial 1971 film that stars Malcolm McDowell as the leader of a sadistic gang. The film itself features very few firearms, and those that appear are rather incidental to the story. For instance, all depictions of law enforcement in Britain (in the 1960s) rarely show them carrying firearms. This also goes for the Prisons & Corrections Officers.

The following weapons were used in the film A Clockwork Orange:

Winchester Model 1897 shotguns are used by the HM Prison Guards during the Ludovico Project visit, when the Prison is toured by the Minister. Only during this VIP visit do we ever see the Prison guards with guns. 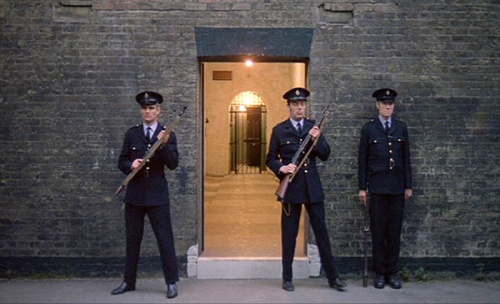 The Prison Guards hold Shotguns when the Prime Minister Visits.

During the Ludovico Treatment, Alex is forced to watch scenes of violence with Nazi scenes containing WW2 battles. Despite being a montage of World War 2 combat, most of the fighting footage is either of aerial bombings by Stukas or Russian front footage from Panzers. There is only one stock footage shot that has any sort of firearm visible. It is a rather famous one of German soldiers kicking in a door, wielding Karabiner 98k Rifles. 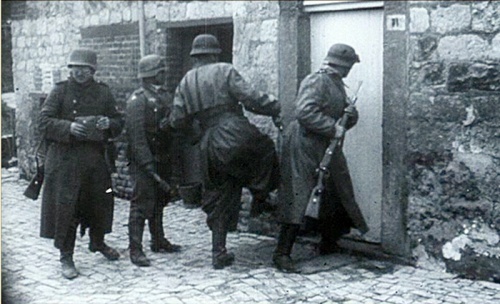 Stock footage of German soldiers kicking in a door, shown on the movie screen as part of Alex's mind control treatment. The Soldiers hold Karabiner 98 rifles.

During the Ludovico Treatment, there is also a clip of a MG17 machine gun firing from a Junkers Ju 87 Dive Bomber in the montage of World War II footage. Technically this counts as an appearance of the MG17, which was the standard nose mounted machine gun for that plane.