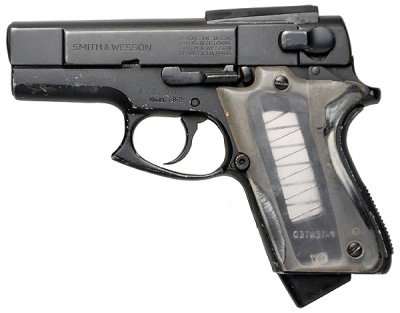 ASP - 9x19mm. This is the firearm used in the production of the film Cobra.

The ASP is a custom pistol based on the Smith & Wesson 39, first designed and built by Paris Theodore in the 1970s. Theodore was the owner of a gun holster shop in New York called Seventrees, Ltd., but he also experimented with firearm designs for special forces alongside making gun holsters; the CIA was one of his customers. The ASP was created to satisfy the needs of these special forces, who wanted a concealable pistol.

Theodore's clandestine weapon production was managed through a sister company, the Armament Systems Procedures Corporation (ASP), from which the pistol gained its name. When Theodore sold his business in the late 70s, the ASP corporation was purchased by gun makers in Wisconsin, who continued to make the ASP pistols.

The ASP is based on the Smith & Wesson Model 39 or 39-2. Modifications include shortened barrel and slide, fixed barrel bushing, a unique "guttersnipe" system in lieu of conventional sights (featuring a rear slot that looks like a water trough, intended to be used by the shooter in fast instinct aiming), clear Lexan grip panels, a forefinger grip on the trigger guard, and a smoothed gun profile.

The pistol was notably used by James Bond in several of the novels written by John Gardner. Also, Felix Leiter carries an ASP in a story by Gardner's successor Raymond Benson (The Facts of Death), though Benson had 007 go back to the Walther PPK and the new P99.