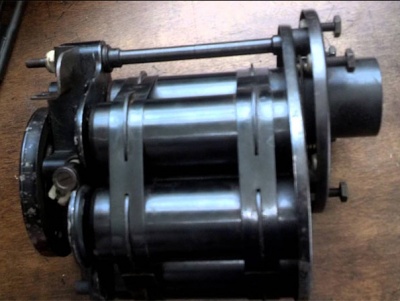 The AN/M5 Pyrotechnic Discharger was an electrically or pull cord-operated six-shot rotary 37mm flare launcher mounted on larger Army Air Force bombers during the Second World War. The cylinder is indexed by the rotation of a wheel at the rear which also operates the double action hammer: it appears on some AN/M8s this was driven with an electric motor, while on others a rack-and-pinion gear connected to a handle (referred to as a "remote controller") was used.

They were typically mounted in a port in the aircraft's fuselage so they could be fired from inside, using the mounting plate around the barrel. These devices are fairly rare today since few crews thought to take them home and most were destroyed along with the aircraft they were mounted in.