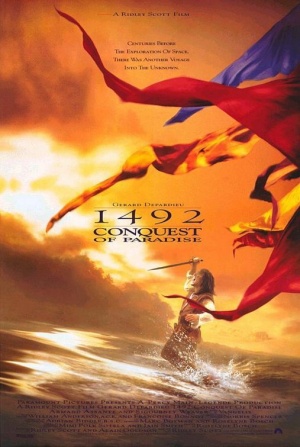 1492: Conquest of Paradise is the 1992 historical drama directed by Ridley Scott that stars Gérard Depardieu as Christopher Columbus. The cast included Sigourney Weaver and Armand Assante. The film was released during the 500th anniversary of the explorer's discovery of the North American continent and was one of two feature films released in that year that featured Columbus.

The following weapons were used in the film 1492: Conquest of Paradise:

Christopher Columbus (Gérard Depardieu) and his men are ambushed by the men of Adrian de Moxica (Michael Wincott) who are armed with Matchlock Muskets. Columbus then has his men return fire with their Matchlocks. This is anachronistic as the muskets used in the film are of the later 16th century type and at the time of these events (1499) only more primitive arquebuses and firearms would have been available.

Adrian de Moxica (Michael Wincott) raises his hand as he leads his men with their Matchlocks.

Notice the great length of the muskets. This type of long muskets was developed around mid 16th century. Arquebuses of the shorter type should have been used instead. Not to mention that the usage of firearms is somewhat overrepresented with every man armed with a gun considering that Cortes had only 13 harquebuses out of hundreds of men for example.