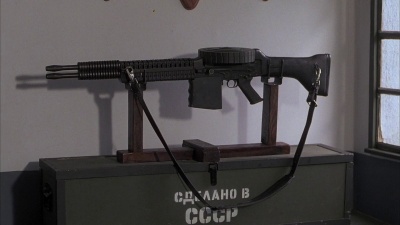 The assault rifle, as it looks like in the film Red Scorpion. This was made from a South African R1 (FN FAL) battle rifle.

The large assault rifle used prominently in the 1989 movie Red Scorpion by Nikolai Rachenko (Dolph Lundgren) is an FN FAL/Vektor R1 mocked up to resemble a fictitious experimental Soviet assault rifle. The FN FAL used in the movie has been modified with twin barrels, a custom stock, the pistol grip from a Vektor SS-77 general purpose machine gun, an enlarged magazine/foregrip and a Lewis gun's drum magazine mounted on top. Upon closer inspection only the lower barrel can actually be seen firing; presumably this is because building a weapon that could fire from two barrels and fed from different magazines would be a far more difficult modification, and the discrepancy isn't that noticeable on-screen. The rifle may have been inspired by the 1956 Winchester SALVO rifle, an experiemental double-barreled side-by-side FN FAL chambered in .22 caliber.

IMFDB formerly incorrectly claimed that the weapon is a mockup of the AO-63, a Soviet double-barreled AK-pattern rifle (see talk page for more info). This claim is false (and had unfortunately created a persistent rumor on the internet); there is no evidence inside the movie or from the movie's production that suggests that it was intended to be a mockup of the AO-63, and the AO-63 itself only became publicly known relatively recently, even within Russia. There is no way that the producers of Red Scorpion from 1989 could have learned about the existence of the AO-63, an obscure Russian prototype weapon that was probably only known by its designers in the 80s.

The "Russian Assault Rifle" and variants can be seen in the following films, television series, video games, and anime used by the following actors: