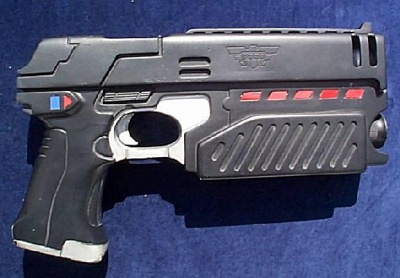 Lawgiver II - this is a stunt prop replica of the weapon

The Lawgiver II is the primary weapon carried by the Judges in the 1995 film Judge Dredd. According to an article from Beretta World, this handgun was in reality a 9mm Beretta 92FS handgun with the futuristic casing built around it. In the film, the gun is stated to have a 25-round magazine with "programmed mission-variable ammunition", the capabilities of which include rapid-fire, armor-piercing, grenade launcher, signal flare launcher, and a special high-powered dual round known as the "double-whammy". It also has a security feature which allows only a Judge to operate the gun.

There were 6 practical-firing Lawgivers, all with slight variations in their casings. There were 2 sfx "Double Whammy" Lawgivers designated as H1 and H2. Both guns had motorized barrels which were servo operated by radio control by off-stage technicians. Sensors built into the front and rear of the Beretta's external magazine well caused the lit casing elements to operate. By releasing the rear sensor and squeezing the front the side elements go out and the red elements on each side of the casing come on...signal flare, rapid fire etc. None of the practical live fire Lawgivers had the Double Whammy rubber scope with glass lens.

The base firearms were later recycled for the modified handguns used in the 2002 film Blade II (the pistol retained the same magazine butt-plate from the previous build).

The Lawgiver II has been used in the following: