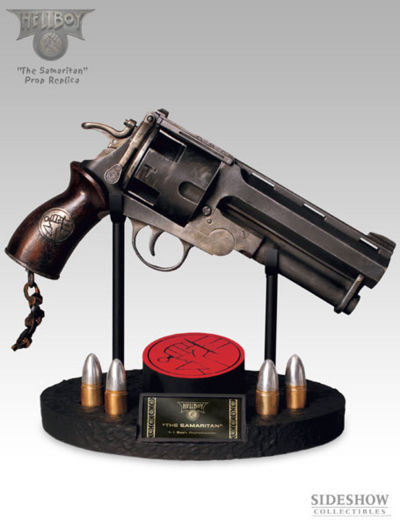 Aquired in the '50s from the BPRD, Hellboy named it the "Samaritan" because it puts monsters out of their misery. The metal of the gun is forged from a combination of Irish church bells, cold iron from crucifixes, blessed silver, and other mystic metals. The grips have the BPRD insignia on each side and the wood of the grips is believed to be that of the cross of which Jesus Christ was crucified on. The gun has immense muzzle energy and is believed capable of breaking a normal man's arm due to great recoil. The gun holds 4 shots and fires bullets HB makes himself as a hobby. He puts Holy water, Garlic cloves, and white oak shavings in his special rounds he calls "The Works." The gun uses a tip-open action similiar to a Webley or Schofield action revolver. It fires double action and single action. When out of bullets, Hellboy likes to use it as a hammer as the cannon weighs around 10 pounds!