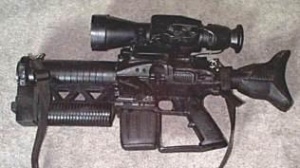 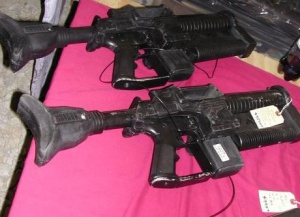 This is the assault rifle used by Kurt Russell as Snake Plissken in Escape from LA. It is a LaFrance Specialties M16K with rubber, plastic and aluminum parts mounted to the outside. The weapon was supplied by Ellis Mercantile for the production after Stembridge Gun Rentals' version based on the Rocky Mountain Patriot failed to work on full-auto after one magazine.

For some reason this rifle has been circulated on the internet as the "Knight's Armament M16Z" prototype, and obviously found to be a hoax.

NOTE: This weapon is also used by Olivier Gruner and numerous people trying to kill him in the film Automatic.