Isn't this guy Jason Flemyng? Doctor Jekyll from The League of Extraordinary Gentlemen? 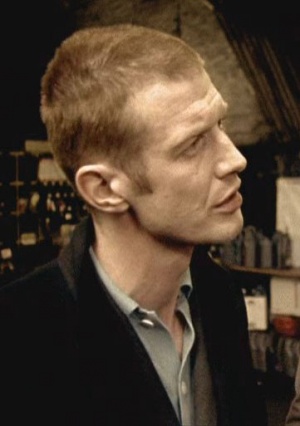 I ask here because he is NOT credited as being in the film by IMDB.

I do agree. Though I know him better as Mulligan from Deep Rising. But anyway, IMDB sometimes doesn't get updated, so maybe he is in the movie and they just haven't put his name on the IMDB entry. -MT2008 03:03, 21 January 2010 (UTC)

it looks like he has a miner role. Rex095

Which is irrelevant. He speaks. Even ONE LINE spoken means you should get a listing in the credits. There are weird examples in previous movies where relatively important stars are uncredited, which always mystified me. For example in the movie "Simone" with Al Pacino, the actors Elias Koteas and Rebecca Romjin-Ramos were never credited even though both had extensive screen time. One of the mysteries of the business i guess. MoviePropMaster2008 20:41, 21 January 2010 (UTC)

Rex i think its Minor. I <3 Deep Rising! LOL! He always will be a Pikey to me! =P He is in quite a few of my fav movies. -- Furious Oyster

Yeah, hes the same guy..he worked with the same director in STARDUST..i dont think he really has a credit on the film, i read somewhere its a really minor part--DB

I don't know if you guys consider this funny, but that actor that plays the Lobby Bellman (Jason Flemyng) gets killed in some funny ways by Heckler & Koch handguns. First he gets shot in the mouth by a suppressed Heckler & Koch USP Compact by Hit-Girl. Second in "Transporter 2" he get stabbed in the neck by a disassembled Heckler & Koch USP Match slide by Jason Statham! I just find that hilarious :)!

I think that the sniper rifle is a SIG rifle of some kind in not sure yet until I see the movie--Sniperinthemist 21:08, 14 F

Just watched this today, quite true to the comic too, there are shitloads of guns in big daddies safe houses, i mean everything, AUG's M4s G36's SIG assult rifles, desert eagles, browning hi powers, beretta 92f's n inoxes too many to mention. Also hit girl doesnt dual weild the USP compacts she has the USP in her right hand and something else in her left. Aaaaaaanyway go see it, It kicks ass, pun toatlly intended --Captain Snikt 01:04, 27 March 2010 (UTC)

In the Blu ray edtion special features there is a deleted scene showing Big daddy, Hit girl & the sniper rifle in the trunk of Big Daddys car (like the washington sniper with the rifle shooting out of a hole in the back of the car) it looks like a SR-25 type rifle with a knights type supressor, Sorry about the quality but i cant cap as i only have the blu ray and i dont think this feature is on the DVD?. curlyboy http://www.imfdb.org/images/e/e0/002.JPG

The jetpack Miniguns are complete fabrications at least for the fireing scene. Most likely the twin barrel clusters are airsoft or some other fake.Right now I am trying to figure out who makes the Armsel Striker varient from the last shootout. Rockwolf66 04:19, 17 April 2010 (UTC)

Wouldn't the miniguns and the ammo weigh a lot and firing it so close to your head would make you go deaf unless he was wearing ear plugs. That nitpick aside, it was an awesome scene Excalibur01

Well since Jetpacks don't exist in real life, I can suspend my disblief that the jetpack CAN carrying several hundred pounds of weight on it. But still, unless he's wearing ears, his ear drums would have been bleeding by the time he's done shooting. But still...very awesome scene. Excalibur01 04:53, 13 May 2010 (UTC)

Well they do have real life prototype jetpacks since the 1950's I think. the problem with them is that they barely have enough lift for one person and the fuel consumtion is huge so they have no range whatsoever.Rockwolf66 04:59, 13 May 2010 (UTC)

Modern turbojet models (ie Jetpack International T-73) are much more practical, and it's quite possible to build even more capable things.

most jetpacks built only have 30 seconds of flight time

So what, some have well over 15 minutes. But none of either type look much like shown in the film))

My two cents in this conversation: (a) though the jetpacks seen in the film are obvious fantasy, there are now jet packs which can run up to 30 minutes (just shown on a recent TECH show). (b) the guns are supposed to be XM124 Micro guns, which was the 5.56mm version of the M134 7.62mm Mini gun. It's obvious because Kick Ass has belts of 5.56mm ammo before his mission. Now these don't look like G.E.'s prototype XM124 Micro gun, but the Israelis were kicking around some field testing of 'their version' of the 5.56mm micro gun, during the Intifada, though information is really scare on their gun. Sure the gun is too sparse to be an actual XM124, but the 5.5mm micro gun does exist... :) MoviePropMaster2008

What was the gun Hit-Girl was using in her left hand in the final gun fight? It was not a HK USP compact.

Even thpugh hit girl used two different guns she used the same ammo and magazines which wouldn't fit. When she swaps the magazines the USP compact doesn't release or reload as s hown, I don't know about her other gun.

I'm wondering if Hitgirl's Balisong(s) should be on the page. I know this is movie firearms, but some of the pages have knives or bladed weapons in them. Should they be added to the main page or not?--FirearmFanatic 12:24, 21 April 2010 (UTC)

No, they shouldn't. Unless this site becomes devoted to weaponry in general, it should be kept to firearms. Despite some of us(including me) having an interest in other forms of weaponry as well, this is a site for firearms, and the pages that have knives/blades on them probably shouldn't have them in all honesty. I mean, the pages for the Blade movies don't have his sword and throwing blades, the page for Big Trouble in Little China doesn't have Jack Burton's knife(which he actually uses with more efficiency than the Tec-9 he carries), etc. And it's not that those weapons were overlooked(the Tec-9 is even described on the Big Trouble page as "Jack's primary weapon along with his knife") or forgotten, it's that they simply don't belong in what is supposed to be a firearms database. DKS01 12:02, 22 April 2010 (UTC)

Well, if anyone cares to know, the balisongs are most likely Benchmade 42s. Aren't "Bazookas" really just a launcher of explosives? They don't use power but a rocket. --FIVETWOSEVEN 23:44, 17 May 2010 (UTC)

Anyone else just love that scene? He just lays waste to all those guys. It was probably one of my favorite parts. BTW does anyone know exactly what he is saying to hit girl during the rescue? It was really hard to understand it in the theater. --FuriousOyster

- Think he says "Now get to cover, Child" the first time, and "Now switch to Krypto-light" the second, (for the strobing tactical light) --- bigchiefreea -- And then something like "go to Robin's Reveeeeeeenge" (?) - @Guy before me, I've researched this a bit and it seems this is what he actually says: "Take Cover child!", "Now switch to Kryptonite!", "Go to Robin's Revenge!". The last two things he says are just code words for maneuveres. --47

IMDb states: "Big Daddy's line, "Now go to Robin's revenge!" is a reference to a Robin comic where Robin was fighting a blind master martial artist. Even though he was was blind, his skill was such that Robin could not lay a finger on him. Robin was able to set up a whistle to blow automatically. This overloaded the blind man's primary sense and allowed Robin to sneak up behind him"

The SMAW looks like an extended AT-4 tube with the fire control group being a SEF type lower receiver of a H&K MP5 with some more cosmetics on it.

There are clearly two variants of jetpack machineguns - the ones that are partly seen (in crate), with longer, bigger barrels of actual M-134 Minigun, and the actual ones (used in action). These ones are much shorter and smaller. I have some screenshots that show these "baby-machineguns" (they look like shortened XM214 Microgun/Six-Pak, also Kick-Ass in on scene clearly have ammo-belt of 5.56mm ammunition on shoulders, not 7.62x51mm) on gun-wall.

I think it would look a lot neater if the armoury/armouries were amalgamated into a single section, with or without photos of the guns there... Also, there are quite a few in the armoury that haven't been ID'd. We also appear to have forgotten a couple handguns used in the final firefight, including but possibly not limited to: Huge Goon's handgun (never fired, clearly seen when standing at the door), some in the hands of the security detail...also, Detective Gigante (Xander Berkeley)'s S&W (pretty sure it's a 4506), the S&W compact revolver handed to D'Amico (Mark Strong) in the car at one point, and also the PGO pump shotgun held by the guy who blows his own head off in the hallway shootout. I have no problem looking into exactly what weapons these are, but I can't provide screencaps... --LordOfTheLocusts 19:57, 13 December 2011 (CST)

During the hallway shootout scene between Hit-Girl and a group of nine goons, the second of the bad guys (grey suit, silver/steel watches) has a firearm I was not able to identify. My first guesses (Jericho 941, CZ 75 Duty) were wrong; the aforementioned pistol has a trigger guard that unusually widens in its top. Does anybody have an idea? Gorky 18:55, 26 April 2017 (UTC)

Damn, I completely failed to take Walther into consideration.... It looks more like a P99 than a P22 to me, due to the size of barrel bore, but I might be wrong there. Thanks for a tip. But still; while everything on the pistol is pointing to the modern Walther lineup, what is it with the wide trigger guard (visible just around his trigger finger)? Doesn't seem to be a part of original pistols, at least according to what I found. Gorky 19:29, 26 April 2017 (UTC)

Not sure there, but I'd probably rule out the Blow F06, since (although the image is not focused on firearm) it seems like the frame of the gun reaches all the length of the slide up front. Thanks for the point about the slide safety, haven't noticed that one... And yeah, the trigger guard is a real mystery now. Gorky 9:45, 27 April 2017 (UTC)

My guess would be that it is a Beretta 8000L Cougar F Type P: 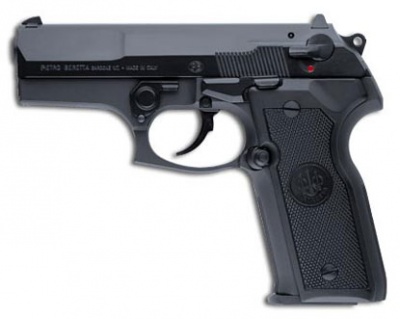 Beretta 8000L Cougar F Type P - 9x19mm
Although it is hard to see from this side on photo, the Cougar has this strange thing where the full width of the frame continues part way down the trigger guard. You can kind of see it in this image. --commando552 (talk) 06:24, 27 April 2017 (EDT)