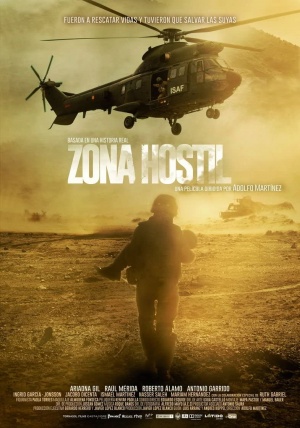 Zona hostil, also known under its English title Rescue Under Fire is a 2017 Spanish war film. Afghanistan, 2012. A mission to rescue wounded allied troops goes awry, leaving a group of Spanish Army soldiers and medics trapped and surrounded by Taliban forces. Their commander must carry out an audacious plan to rescue them before it is too late. Based on true events; it is directed by Adolfo Martínez.

The following weapons were used in the film Zona hostil:

The Heckler & Koch USP Compact is the standard sidearm of Spanish soldiers.

Captain Varela (Ariadna Gil) fires her USP to protect the soldiers she treats.

U.S. soldiers are equipped with the M4A1.

Most Spanish Legion soldiers use the Heckler & Koch G36E as their primary weapon.

The Browning M2HB is seen mounted on US Army vehicles.

Taliban fighters use the RPG-7

A Taliban fighter lined up in the crosshairs of a sniper scope armed with an RPG-7.
Retrieved from "https://www.imfdb.org/index.php?title=Zona_hostil&oldid=1397109"
Categories: