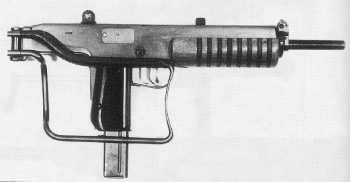 ZK 476 (ZK - Zbrojovka Koucky) is an experimental Czechoslovakian submachine gun designed by Josef and Frantisek Koucky in 1946-1948. It was not adopted for service, losing out in trials in 1948 against the CZ 447 (another experimental SMG, created in 1947, which became the basis for the Sa 23). The ZK 476 also was tested in 1948 by some countries, but apparently all potential offers failed, and its production was then finished. The ZK 476 existed in two versions: with a folding wire buttstock (referred to in some sources as a variant for airborne troops) and with a fixed wooden stock. The fixed-stock variant is also divided into "early" and "late" models, the first differs by a different rear sight and a wider forearm.

The ZK 476 and variants can be seen in the following films, television series, video games, and anime used by the following actors: