The Widow (Russian: Вдова; Vdova, the working title was Pokrov Forest: Лес Покров; Les Pokrov) is a 2020 (filmed 2019) Russian mystery horror movie, very loosely based on real events and directed by Ivan Minin and Svyatoslav Podgaevskiy (Block 18 and The Bride). For many years, numerous fully naked human corpses have been found in the marshes of Leningrad Oblast (this is the only real part of the plot). A search and rescue team has begun a search in this area for a missing boy and soon find themselves caught in a mysterious trap.

The following weapons were used in the film The Widow:

Alexey (Aleksey Aniskin) owns a Hebel Flare Pistol Model 1894. Victoria (Viktotiya Potemina) takes this gun for herself and uses it to threaten the witch Zoya (Margarita Bychkova), who easily disarms her and fires this pistol one time. 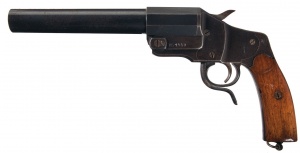 ...and Zoya manages to grab the gun from Victoria's hands.

Zoya puts her finger on the trigger...

...and cocks the Hebel pistol.

Zoya puts the pistol to her chin...