War of the Worlds - Season 1 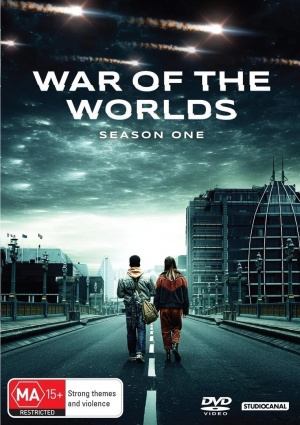 The following weapons were used in Season 1 of the television series War of the Worlds:

A Beretta 92FS, possibly standing in for the PAMAS G1, a modified 92FS is used by Colonel Mustafa Mokrani (Adel Bencherif) in the eighth episode after his HK416 carbine runs out of ammo while engaging the scout bots. 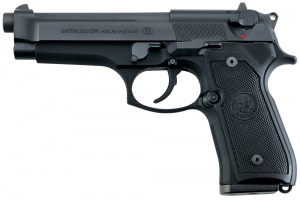 Colonel Mokraini uses his sidearm while holding back the scout bots in the eighth episode.

A Browning Hi-Power is seen in the sixth episode when a survivor tries to take out alien quadrupedal scout bots. 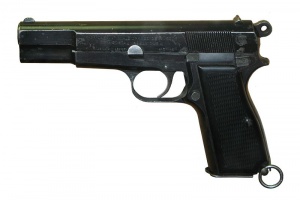 The survivor out of luck when he runs out of ammo in the sixth episode.

In this shot, you can see the entire Hi-Power with retracted slide.

A Glock 17 with no rails is taken by by ex-Sudanese child soldier/illegal migrant Kariem Gat Wich Machar (Bayo Gbadamosi) from the tactical holster of an Authorized Firearms Officer (AFO) in the aftermath of the worldwide EMP attack in the second episode. Rachel (Georgina Smith) uses one in the third episode to shoot herself after the British underground command bunker is raided by the quadrupedal scout bots. Helen Brown (Elizabeth McGovern) uses it, likely taken from the underground command bunker, when she and Bill arrive in Hammersmith, seen in the fifth episode. Ex-hospital orderly Ash Daniel (Aaron Heffernan) takes it from Kariem's bag, but he is allowed to keep it as his main weapon. By the end of the season, Sarah Gresham (Natasha Little) takes it when she and Tom leave the university.

Depending on the scene, it sometimes changes to at least a third gen Glock. 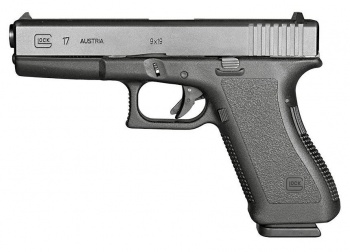 The Glock next to Kariem after he is stabbed by a surviving shopkeeper in the second episode.

Kariem making his first impressions on the Greshams by taking Emily as a hostage.

Rachel preparing to shoot herself in the head in the third episode.

Helen being quick on the draw in the fifth episode.

This scene with Helen in the sixth episode shows that the pistol she has is equipped with no rail.

Helen encounters a quadrupedal scout bot at the university at the end of the seventh episode. 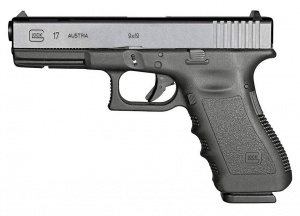 Ash gripping the Glock while hiding from the quadrupedal scout bots in the fifth episode.

The unattended Glock 17 taken by Sarah in the eighth episode.

Sarah aims the Glock 17 in the dark.

The looter speaks to Jonathan in the second episode. The SP 2022 is tucked in his pants, likely taken from a slain Police Nationale officer.

The SP 2022 picked up in the fourth episode.

A Heckler & Koch MP5A3 with a Surefire light attached is seen in the third episode when Helen takes it while exploring the underground command bunker.

Helen with the MP5A3 in the third episode.

Side shot of the MP5A3 and Surefight light.

The Enfield SA80 is used with British troops in the season. They're seen both with or without railed handguards.

A female soldier on the right with an SA80 in the first episode.

At least one British soldier is seen with the railed handguard in the first episode.

A British soldier guarding the underground command bunker in the third episode before something tragic happens...

The L85A2 seen in the shopping cart Bill commandeers in the fifth episode.

An L85A2 is carried by a surviving British soldier when they secure the Greshams in the eighth episode.

The Heckler & Koch G36C is first seen in the fourth episode as the primary weapon of surviving PN officers, including Clara (Alysson Paradis) and Noah Dumont (Guillaume Gouix). In the eighth episode, the G36C is taken by Sacha Dumont (Mathieu Torloting).

Clara with the G36C after arriving at the Dumont residence.

Noah stands in an empty street at night.

Jonathan on the run with Alexis' G36C in the fifth episode.

Noah uses the G36C against the incoming quadrupedal scout bots.

Jonathan with his hand on the G36C's fire selector in the seventh episode.

The G36C fired by Sacha at a scout bot in the eighth episode.

The Heckler & Koch HK416 is used by French troops in the season. They're mostly equipped with EOTech sights.

French troops led by Colonel Mokrani descend on Grenoble to investigate in the second episode.

French troops accompany Catherine Durand into the forest in the fourth episode.

A SIG-Sauer MCX is seen in the second episode, taken from an unused British Armed Response Vehicle (ARV) by Kariem after he sneaks into Hammersmith.

Kariem finds an unfired SIG-Sauer MCX in the second episode.

Kariem walks through the deserted streets of Hammersmith.

The MCX's vertical foregrip light being used by Kariem to illuminate a hallway in the deserted hospital at the end of the fourth episode.

Closeup of the MCX's retractable stock in the fifth episode.

The MCX with Kariem when he goes with Emily near the end of the eighth episode.

A Winchester Model 1300 with no stock is seen in the seventh episode, first carried by a female survivor in the French Alps.

Sophia Durand (Emilie de Preissac) encounters a female survivor with the shotgun in the French Alps in the seventh episode.

Sophia leaves the resort with Theo to hike to the observatory while toting the shotgun.

The Heckler & Koch HK417 is used by French soldiers stationed in the French Alps before the worldwide invasion.

The HK417 fired at quadrupedal scout bots in the second episode.

A French soldier engages the scout bots in the forests near Grenoble in the fourth episode.

French troops find the corpses of their comrades in the eighth episode. An HK417 is seen among the bodies.
Retrieved from "https://www.imfdb.org/index.php?title=War_of_the_Worlds_-_Season_1&oldid=1474297"
Categories: