Hills Have Eyes 2, The

From Internet Movie Firearms Database - Guns in Movies, TV and Video Games
(Redirected from The Hills Have Eyes II)
Jump to navigation Jump to search 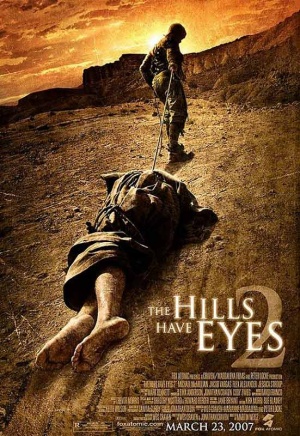 The Hills Have Eyes 2 is a 2007 sequel to the 2006 feature remake of the Wes Craven horror film. The sequel follows a squad of National Guard soldiers in the New Mexico desert who stumble upon the mutant dwellers. Despite the New Mexico setting, the majority of the film was produced in Morocco.

The following weapons were used in the film The Hills Have Eyes II:

A Beretta 92FS, standing in for the M9, is used by Colonel Lincoln Redding (Jeff Kober) to commit suicide after he is found by the National Guard trainees and warns them of the mutants.

The M4A1 Carbine is carried by the National Guard trainees in the film including PFC Amber "Barbie" Johnson (Jessica Stroup), PFC David "Napoleon" Napoli (Michael McMillian), PFC "Stump" Locke (Ben Crowley), PFC Marisol "Missy" Martinez (Daniella Alonso), PFC "Crank" Medina (Jacob Vargas), and others. All M4s except Stump's have Trijicon ACOG sights mounted on their carry handles, while Missy's appears to have standard plastic handguards instead of a rail system, and Crank's and Amber's lack flashlights. After his death, Stump's M4 is used by a nearly-blind mutant named Grabber in an attempt to kill Amber and Naploeon.

The M4A1 Carbine is held by National Guard trainees while under fire.

The M4A1 Carbine is carried by the National Guard trainees including PFC Amber Johnson (Jessica Stroup) and PFC "Crank" Medina (Jacob Vargas). Note the standard handguards on Missy's and lack of a flashlight on Crank's and Amber's.

An enemy fighter in the beginning of the film as a number of Mk 2 hand grenades concealed on her person.

Norinco Type 56-1 is used by an enemy fighter.

A fighter wields the rifle.
Retrieved from "https://www.imfdb.org/index.php?title=Hills_Have_Eyes_2,_The&oldid=1384652"
Categories: