In a somewhat awesome move, Conrad Vig (Spike Jonze) tapes pieces of C4 to Nerf footballs. The first one angers Major Gates, but the next two impress them as one destroys a bunker and the second takes down the helicopter.

Note the k98k in the background.

I'm done. What do you guys think? The Winchester

Some one needs to fix some grammar mistakes and add pictures to some sections and some small rewrites and it would be perfect. I also think i can find the a picture of real Gulf War surrender cards.Oliveira 18:15, 23 April 2009 (UTC)

Those are the real ones. The Winchester

No, they were colored, but after being in the desert for so long, the color faded. The Winchester

Was this patented without my approval? ;). I actually got the idea for trivia from MPM but as you can tell from the T2 page I took it a little too far. Personally I don't think this is that accurate of a movie, all the actors tend to have their fingers on the triggers, and there's some bad gun handling. Other than that its not bad but bad gun handling can ruin a movie for me. - Gunmaster45

Yea, i just really like this movie. Sorry again, but i guess i did screw up a little (as always) Winn

I like that. Sucks that I don't have paypal though, but I take checks and money orders. :) - Gunmaster45

Liberal slant!? That may be so or not. But it's a satire not an action-war movie like Black Hawk Down and satires are allowed to do everything.

Not to beat a dead horse, but I'll show why I personally don't see this movie as anything special in realism.

Thumb resting on wrong part of gun. He should be trained to hold the weapon in a different manner, but he was likely not trained, since he's an actor, not a real soldier.

As you commented, he's carrying his rifle like Elmer Fudd (my example for bad gun handling) and has the muzzle pointed at an ally. If I was a drill Sergeant, I'd beat his ass and send him home.

His finger is on the trigger, yet he is not ready to fire. Military training and standard gun safety both agree you should keep your finger extended, resting on the trigger guard and never touch the trigger unless you are ready to shoot. 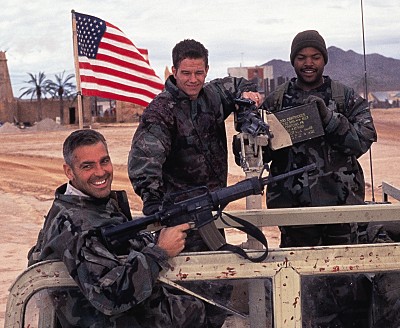 Clooney may be goofing off on set with the boys, but he should have been taught not to wrap his finger around the trigger ever.

He uncocks the hammer by thumbing it down. If it has a decocker, you are trained to decock it with it, and nothing else. If your finger was to slip, you would cause an accidental discharge. Drill sergeants chew up trainees for this all the time (I've seen this happen in police training on TV).

Shooting a lock with a pistol is just stupid. Decent grip though. Usually soldiers try to keep both eyes open for better pereferal vision, since it also allows you to see what is blocked by the sights.

Cup-and-Saucer grip. Not to nitpick (funny because I am :) ), but soldiers are taught a high grip, where the left hand layers on the right, vice-versa. It controls recoil better than to rest the shooting hand on top of the non-shooting hand.

This guy would have quite a shiner if he was really firing this RPG, since they have enough kick that resting the scope on the eye hurts.

As mentioned before, soft body armor won't stop a rifle round such as the 7.62x39mm as seen here.

Sorry to be annoying, I just felt I needed to point out why this isn't that realistic a movie. A good movie, but not all too realistic. - Gunmaster45

GM45 - in the first pic of your "Realism" post, the grip the Markey Mark has (thumb high on the receiver relative to the grip) is indicative of someone who is in the act of manipulating the selector lever. It is perfectly reasonable for his thumb to be there, as he is just about to fire, and is presumably rotating the selector lever from safe to semi.

I see. I missed this scene when I watched the movie so I'm working off of the image alone. - Gunmaster45

And in the second picture, it probably wasn't intentional, but that guy was a reservist, not a real soldier so he might not have the best training. Also in the third picture with Ice Cube, he just finished firing at Iraqi soldiers.

Reservist or not, everyone who underwent training the boot camp would never hold their rifle like that no matter the reason. The worse would be just leave it lying round. Excalibur01 01:17, 30 October 2010 (UTC)

A slight addition to the picture where Jaime Kennedy draws his Beretta on Adriana Cruz. The grip used could also severely injure the shooter if a 9x19 round was overcharge or had any other type of case failure. In which the contents of the magazine blow out the magazine well injuring the shooters hand. -not registered yet :(

While the cup and saucer grip may not control recoil as well, it can help keep a pistol level for shots at longer range, the question is: how far away was he from his target? And really, what are the chances that his gun is about to have a catastrophic failure(And I'd be worried much more about my face were that to happen than my hand, especially considering the early M9s had weak slides)?--Mr-Jigsaw 04:18, 30 October 2010 (UTC)

Proper gripping of the pistol and training is how you shoot at longer ranges. There is no difference in feeling when you extend your arms out to aim the gun and shoot. In fact, if you hold a guy with the cup and saucer grip, and try to extend you arm out to aim, the lack of symmetry and force would prevent you from aiming correctly. It's equal force from both arms to both hands pushing from the left and right side of the grip and stabilizes the gun so you can aim. Excalibur01 05:13, 30 October 2010 (UTC)

I'm surprised this isn't mentioned on the page. During the opening scene with the Iraqi soldier on the mound, he seemingly lifts up the rear sight to reveal some kind of tiny magnifying optic that he uses to determine if the Iraqi soldier is armed. AFAIK, there is NO such device on an M16A2. Spartan198 (talk) 23:41, 6 June 2017 (EDT)