I think the Norinco Type 84 ID for Seth is wrong. The gas block on the rifle in the screencap looks wrong, with the part of the gas block that goes around the barrel being directly under the end of the gas tube, rather than offset forwards and connected with a curved profile. Also, although hard to tell from this pic, it looks as if the barrel is too long for a regular AK variant, so could be a RPK or DM type weapon (Type 84 has target and match variants with longer barrels, but gas block is still wrong). Unfortunately, can't find anything that matches this gas block, but will dig out the DVD later and try and get some better caps. --commando552 05:52, 13 September 2011 (CDT) 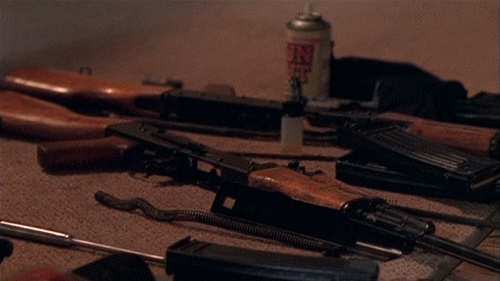 Just watched the episode, and the cult members have a large number of AK-47s (presumably non firing replicas or airsoft) mixed in with a few long barrelled Norinco Type 84S "Target" rifles. The guns that you see being cleaned are Type 84S's, but the one laying on the floor in the screenshot above just doesn't look like one to me. Maybe it is the angle, but my eye just won't agree. The gas tube looks wrong, the top of the gas block is too long and the alignment with the bottom half is wrong, there is a ridge at the front of the part of the gas block around the barrel, and it looks like the holder from the cleaning rod is slightly further back. Does anyone else see this or is it just me? --commando552 10:54, 13 September 2011 (CDT)