I'm assuming the user who created this was waiting for an account and doesn't have any caps ready, so I'll give it a while before deleting it. But it will be deleted if it's left like this. Evil Tim (talk) 23:20, 9 January 2015 (EST) 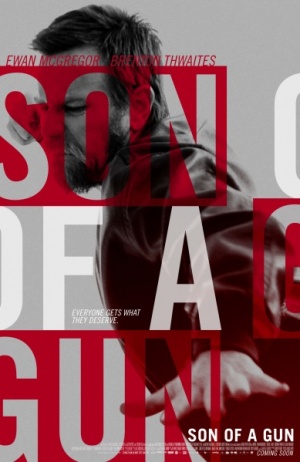 Son of a Gun is a 2014 Australian action crime film written and directed by Julius Avery and stars Brenton Thwaites and Ewan McGregor.

The following weapons appear in the movie Son of a Gun:

I think these carbines (there are two, one either side of his head) may actually be AIMRs rather than DDR carbines:

They are pretty similar so I am not 100%, but there are some differences. Firstly the front sight, which on the Mpi is more "skeletal" with a smaller front sight which has a large void under it, as opposed to the movie gun which appears to have the larger front sight with smaller void of the AIMR. The AIMR has a slightly shorter barrel leading to a shorter section of exposed barrel and gas tube between the handguard and sight which to me seems like a close match for the film guns. The Mpi has a bracket to support the cleaning rod while the AIMR and the movie guns don't. The flash hider looks too long to be the fixed one of the Mpi, more like the removeable one of the AIMR. Lastly, the furniture of the handguard looks more like wood than the bakelite type stuff used on the DDR rifles. --commando552 (talk) 06:07, 5 May 2015 (EDT)