Talk:Raiders of the Lost Ark

MG 38 and other stuff

Is there anyone can fill me in on the MG38? I can find no evidence or documentation that there was ever a version of the MG34 called the MG38. Isn't this just a mistake by the author of the page? I'm not going to change anything, just in case someone can provide proof that this weapon actually existed.

And why is the twin MG in the flying wing listed as a Nordenfelt Gun? As someone already mentioned, it's supposed to be a MG15(although it just a mock-up), and has nothing to do with a Nordenfelt gun. There's someone on this site who has a bad habit of calling every weapon with multiple barrels a Nordentfelt.--Phillb36 21:40, 24 March 2009 (UTC)

There seems to be an overuse of the word "nazi" in describing German soldiers on this page. Not everyone in their armed forces was a member of or believer in the National Socialist German Workers Party. If you're going to label German soldiers as "nazis" than you should replace the word Soviet with "communist" when discussing the Red Army. Harleyguy 28 June 2010 04:39

- In the film, the story (and even dialogue from one of the 'Intelligence' guys) stated that the Germans looking for the Ark were part of the Nazi party/organization, sent by Hitler. While it indeed would be inaccurate to describe Germans in general in WWII as Nazis, I don't think that's really so much the case in regards to this film/page. StanTheMan 19:34, 28 June 2010 (UTC)

Since they we're there for religious relics it would only make sense that Hitler would send his most trusted of Nazi Soldiers. Spades of Columbia

I was just watching the movie, I'm pretty sure Indy pulls out some sort of 1911 and tucks it into his pants after he wakes up on the Bantu Wind just before the ship is boarded by the U-Boat -burgershot621

That was a Browning HP. -kornflakes89 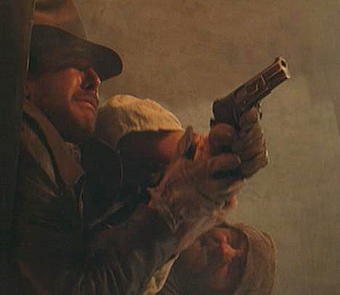 In terms of inquiry about a manufacturing change, I doubt the 1875 Remington was still in production by 1936 (And I don't think either it or replicas were being made in 1980-ish, either). Otherwise, not sure what you're getting at - the firing pin looks like it's still there to me. It does look smoothed down a bit, but revolvers weren't as finely machined back then. The nubbing of the pin could also either be from wear or possibly even done deliberately to deactivate it (without making it look like it was missing the firing pin), as you suggested. But the firing pin still looks like it's right there to me (even if only partially). StanTheMan (talk) 20:51, 26 January 2015 (EST)

Has anyone noticed that there are some continuity errors during the barfight in Nepal? Indy primarily uses the previously mentioned FN HiPower, but in some shots you can clearly see him holding his revolver. The section on the Smith & Wesson Mk II Hand Ejector on the main page mentions how the gun was used during the barfight, but it didn't regard it as a continuity error. Anyone know anything about this or if there's a particular reason it was done? --Caldwellb734 (talk) 18:00, 22 November 2015 (EST)

Indiana Jones enters the bar, clearly holding his Mk II Hand Ejector instead of his HiPower.

My apologies to Mr. Ford for the unflattering shot, in which he clearly is firing the Mk II.

The Mk II can be seen again in the shadows.

Some of the shots can be explained with him simply switching guns during the fight, but there are definitely a couple of instant angle-switches and jump-cuts where he's aiming the HP and shooting the revolver with the same hand, etc, which are indeed errors in continuity. That it isn't noted is most likely just an oversight that nobody jumped on yet. StanTheMan (talk) 23:00, 22 November 2015 (EST)

The switching of the guns during the shootout was a deduction that crossed my mind as well, but I also noted the jump cuts where the gun changes. Maybe one possibility is the HP malfunctioned during shooting and they had to replace it with the Smith halfway through the shoot (or vice-versa, but being that it's a blank-adapted automatic the malfunctioning of the HP is probably more likely). --Caldwellb734 (talk) 10:26, 23 November 2015 (EST)

Continuity errors happen all the time, some are less obvious (some, more) but they could be due to any number of reasons - Only one gun or the other was ready for the particular take (likewise due to a number of reasons, including malfunction as you said), or they shot sequences with both guns but had to cobble the shots in final editing for other reasons, and so on and so forth. For the most part all that can be done here is to note the errors themselves - We try to avoid conjecture/speculation on main pages (if we actually know why, that's a different story of course). StanTheMan (talk) 15:03, 23 November 2015 (EST)