Correct me if I am wrong, but the Kimber Warrior has a short guide rod. The kimber in the picture has an extended guide rod. Possibly a Gold Combat II based on the grips? Is it a different model? I Think Russo's is the standard warrior however.

Just a fun one I've noticed in episode 11, one of Frank's g36c mags has the first cartridge with a spent primer, dunno if a safety feature for the actors or a simple overlook, took a couple screens for you: 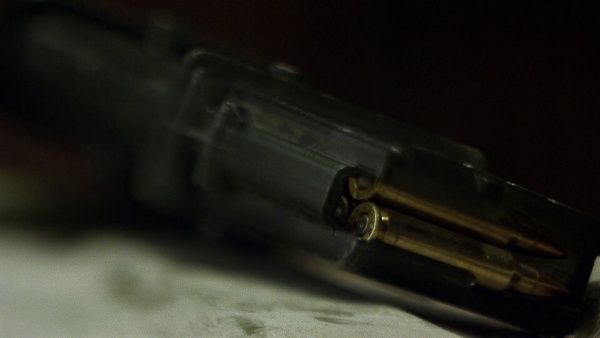 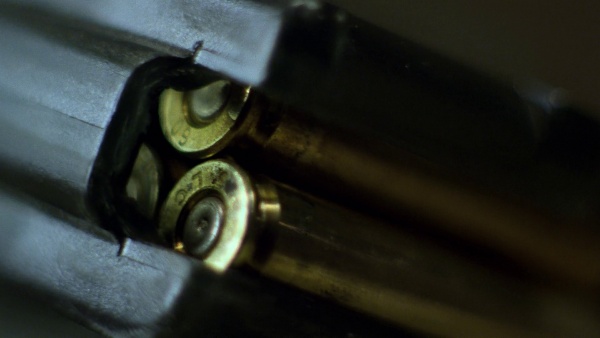 Whenever you see what look like live rounds in a magazine, they will always be dummy rounds. By that I mean that they will have spent primers and no powder but a bullet crimped on. In this cap, I think that all of the rounds have spent primers, it is just less obvious on the second bullet (there is a slight dent visible, maybe whatever fired this round originally did relatively light strikes). --commando552 (talk) 19:37, 21 November 2017 (EST)

Few things I picked up on

A few spoilers probably here so I apologise. Frank starts using the Kimber Warrior as his main sidearm after he and Micro rob the weapons shipment. Billy Russo carries what looks like a S&W M&P with a tan lower in episode 10 as well as a Kimber Warrior in a few other episodes. In the last episode Frank uses some sort of AR variant with a collapsible butt-stock similar to the HK416C and Russo has some sort of custom AR-15 with a stainless finish. Rawlins has a stainless SIG P229 it looked like in episode 12. Lots of MP5s in a couple of episodes and I'm sure I saw an MP7 being carried by a background character in one of the episodes. All this is off the top of my head, I'll no doubt be watching the series again as it was brilliant. --cool-breeze (talk) 18:44, 19 November 2017 (EST)

It really is fantastic. I'm glad Marvel is offering up something for its adult fans with this series. Hard to believe it's in the same canon as the kid-friendly MCU films XD. Maybe I'll check out the other Netflix shows. I didn't think anyone could be a better Punisher than Thomas Jane, but Bernthal definitely owns it. Spartan198 (talk) 08:54, 20 November 2017 (EST)

I never thought much to Tom Janes Punisher until the Dirty Laundry short. He looked the part in the film but the film itself was pretty bad. In my opinion anyway. --cool-breeze (talk) 15:04, 20 November 2017 (EST)

I think the shootout in Micro's hideout was a bit too much like them trying to be John Wick and failing. There's a moment where Frank shoots a gun with his G36 and then tilts it sideways to finish the guy off. Watching it again, I could not see what reason for him to do that. Excalibur01 (talk) 23:11, 21 November 2017 (EST)

During the introduction of Anvil with the DHS doing training, their training M4s had no front sights. Actually, I saw a few M4s without front sights and oddly police officer in tactical clothing with a plain jane M4 with an old carrying handle...kinda weird in this day and age Excalibur01 (talk) 23:11, 21 November 2017 (EST)

I also didn't like the fact that they kept saying soldier in place of Marine and then Curtis was a puzzle. At times, he is referred to as a Marine but then Frank called him a Corpsman, which is different. Excalibur01 (talk) 23:14, 21 November 2017 (EST)

Did not care for how they inserted the loud mouth guy with the NRA shirt and hat preaching against liberals and people who are anti-gun. Excalibur01 (talk) 23:14, 21 November 2017 (EST)

Usually it wouldn't, but with the recent things going on, how the media is painting NRA members as aggressors and now we had the Texas shooter being former military, this show somewhat paints vets in a bad light with these characters. I mean, they think a vet can easily get himself claymore, C4 and an short barreled rifle with a 30 round mag in fucking New York. I'm talking about the Lewis character. Let's assume before his rampage, he got his rifle legally, but it isn't the legal length and it's got a mag bigger than New York law Excalibur01 (talk) 15:27, 22 November 2017 (EST)

So I was one of those Sig owners who heard that the P320 was going to become the standard issue for the Army and thought, "Finally, justice for Sig!" And of course was like I just gotta get one. So while I should mention that the drop-safety issue and current trigger issues have dampened my fanboyism, there could be some residual bias clanking around.

That being said, isn't that a P320, not a P250, that Micro is using? I'm working on getting a snapshot again (had made one, but accidentally put it in a file I deleted) but in Episode 3(Kandahar) you notice in the scene with Frank and Micro (right before Frank releases Micro's left hand so he can access the computer) that as Frank stands to Micro's right (viewer's left) that he's holding the pistol downwards and there is no hammer visible. This leads me to think it's a P320, which would make sense given who's writing these stories. It would also make sense if Sig sponsored them as a form of publicity as the M17 goes online. Just wanted to get some feedback before I change it? - Shinoda, 10:47am MST