It's a bit silly categorizing weapons by side, because some of the weapons are used by two or more sides or don't specifically have a 'side'. Anyone mind if I categorize them by type instead? --MattyDienhoff 06:27, 6 May 2008 (UTC)

I was looking at the screenshots of the AK-74's in this game, and it almost looks as if they used the fake AK-74's seen in GoldenEye. 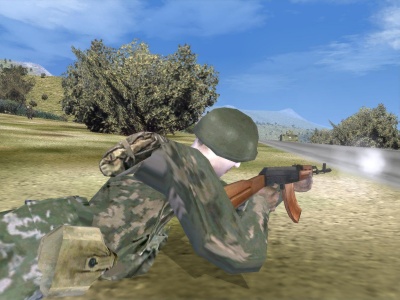 A Soviet soldier firing an AK-74 in Operation Flashpoint. Notice how much this weapon resembles the mocked-up Norinco Type 56 above

Yeah, the only difference is the one in the game also has the downward-angled stock.

Hi, Awesome page that you have here.

Love the layout, do you mind posting where you brought the design from?

Which begs the question: should we move the page to Arma: Cold War Assault (which is also version 1.99 that anyone can update their existing Operation Flashpoint: Cold War Crisis to) or leave it as it was originally released.

Personally, I'm leaning towards the moving option since BIS got the rights to this game back and this is how it called now, complete with the latest update to the original version. --Masterius 14:42, 15 August 2011 (CDT)

Even though BIS chose to rename the game, I think it's better for articles about it (like this one) to retain the original title. This is a game that's been on the market for 10 years. In the minds of everyone who has known it for so long, it is and always will be 'Operation Flashpoint: Cold War Crisis'. That association doesn't just go away. Anyway, it's pretty obvious they only renamed it for legal reasons, since they no longer own the 'Operation Flashpoint' name. I say we stick with 'Operation Flashpoint' and mention the renaming as a note like the Wikipedia article on the game does (at the time of writing). --MattyDienhoff 15:31, 15 August 2011 (CDT)

Do we need more screenshots? It looks like we could use some more on the pistol side, and while going through Steam I noticed I had a copy of Operation Flashpoint ( well, ArmA: Cold War Assault ). I could take some screenshots and post 'em here if anyone wants. -SeptemberJack (talk) 21:13, 27 February 2017 (EST)

P.S. I don't know how I forgot a game that has a whole lot of hours played....

I think the machine pistol in the game is actually a MAC 11, and not a MAC 10. I have a real life replica of a MAC 11, the 9mm version of the famous MAC 10, and it features a much slimmer body... Just like the one in game.