Hi, I'm ChicagoTypeWriter, I'm new of this forum. I don't think it's a Colt Magnum Carry, I think that it's a Smith & Wesson Model 500 with a short barrell. The differences of the manifactures are similar, but the barrell in the film its a bit longer that you think.

It isn't a 500, a 500 is MUCH larger than the gun in the film. Also the rounds shown in one screen cap are definitely not .500 S&W. Its a Colt Magnum Carry as the article states. -Ranger01

The military policeman in this film carry a M1911A1 in his service holster. It's curious how the uniforms of the military police are very old although the movie is filmed in present days. --Charly Driver 10:48, 8 January 2010 (UTC)

I recall reading somewhere that that was done intentionally, probably as a nod to the year the original story was written. --[User:BigD]] 14:16, 19 July 2011

You took out screencaps in the process, removing spoilers is one thing, screencaps no. Another mod, came up with a way to mask them. So I'll utilize that on the screencaps. Also there is a spoiler warning at the top of the page. So you can't say there isn't a warning.--Predator20 03:56, 11 December 2010 (UTC) 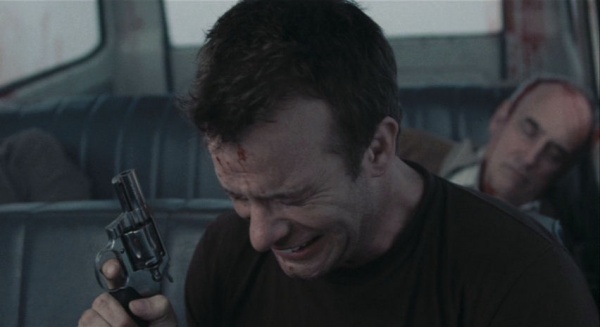 Highlight for Spoilers: David sobs after killing everyone in the car.

I think any screencaps in the car are pretty much going to be spoilers. Especially if he's covered in blood and has a gun in his mouth. It's too bad the caps at the end are posted. I don't think commenting on undented primers is a reason to give away such a powerful ending. Just my 2 cents.--James3 23:52, 27 March 2011 (CDT)

I always get bothered by the images with highlight for spoilers written in bold, because it tells you that something tragic or important is going to happen or has happened. Would it not be easier to say in the image of Tom Jane's character checking how many rounds are left that he is just checking the load, I also don't see how the images alone could spoil anything other than the one with him putting the gun in his mouth trying to kill himself or the second M4 shot which is basically the same as the first but with the guy screaming rather than having a little blood on his face(which given the nature of the film at hand, shouldn't spoil anything). I say remove the final Colt Magnum Carry shot and the second M4 shot and add vague descriptions for the other Colt images to avoid spoilers, you don't need to tell the story in the images.--One shot is all it takes. (talk) 05:21, 23 July 2013 (EDT)

I think a non-spoilery caption like "Soldiers approach David as he breaks down" would be better. It's vague enough to not give anything away, but anyone who has seen the movie will most certainly know why he's breaking down. It's not the image itself giving the ending away, it's the chosen caption doing so. To someone who hasn't seen the movie, David could be reacting badly to anything. An inter-dimensional lobster could have eaten his kid, the old lady could have been revealed to have conjured up the creatures from a cursed Monopoly board, Amanda could have gotten really hungry and eaten Dan raw, or dozens or even hundreds of other possibilities. Spartan198 (talk) 14:02, 26 June 2019 (EDT)