OK, first time creating a imfdb page. Working MOSTLY off of the first trailer. Trying to add the first poster, any publicity images; you know the usual stuff at this stage.

I tried, but the quality of the shots I got were... not optimum. Partly it's to do with not getting a high quality video, partly due to the fast-cut nature of the footage. There's silenced pistol (possibly a SIG-Sauer) used by a motorcylists, what might by M16Ks, a gun disguised a flute. Also, due to this being a Mission: Impossible film, there are less shootouts than in other action movies. Still, less than three months to go 'til release, I think we ought to get the page ready. (User: Scott197836)

Yeah, but you can't really see it, if you can identify it let us know.

Just saw it, Ethan and Brandt appear to use Benelli MP95Es posing as dart guns. Also the villain uses a suppressed p99 in the beginning, and Ethan uses a supressed p226 as well as an unsupressed version at the end. The villain appears to use one too. I also think Luther is assembling one briefly before the end.--One shot is all it takes. (talk) 03:07, 2 August 2015 (EDT)

Saw the movie again, what appears to be SIG SG 552s were seen in the IMF armory in Vienna and one of the guards who unmasked Benji appears to be carrying a Glock pistol. --Btgr (talk) 16:26, 8 August 2015 (EDT)

I haven't seen this since it first came out, but I seem to remember that there were actually 3 different disguised rifles in this scene, all appearing to be totally different props. One was built from a brass instrument, another was inside a guardrail or something, whilst the last was the one that was being used by a fake policeman and was possibly meant to be inside a side handle baton (if i am remembering it correctly). --commando552 (talk) 11:17, 1 November 2015 (EST)

I've looked around a bit, and instead of a Benelli like I previously claimed, the pistol in question appears to be walther ssp.--One shot is all it takes. (talk) 18:09, 2 August 2015 (EDT)

Don't think it is an SSP (or the SSP-E which is a closer match in terms of outline) as this pistol feeds from a magazine which drops in trough the top of the ejection port. On the movie guns you can see what looks like a magazine floorplate ahead of the trigger guard. From what I can see it isn't a Benelli MP95E either, or for that matter a Hammerli 280, Walther GSP, or any other pistol of this layout I can find. --commando552 (talk) 18:44, 4 August 2015 (EDT) 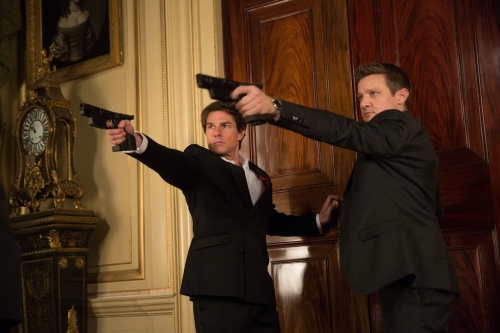 Promo image that shows them better

Late reply, but I agree with Commando552 here and also feel like the SSP identification is a weak identification. The side of the weapon and the sights as seen in this image are completely different from both SSP images. The trigger guard on the movie weapon is also flush with the front of the weapon while the SSP pistols have trigger guards that extend at the bottom. I'm going to change the ID to a more generic inconclusive identification for now, because they definitely are not SSPs.

Hunt hands Alan Hunley (Alec Baldwin) one of the pistols. 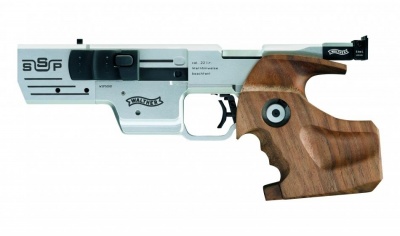 I'm pretty sure that the "P250" in the second shot is actually an H&K USP or derivative going by the design of the frame mounted safety and the slide profile. Not sure about the gun in the first cap, but at the base of the grip you can see the semi circular cut out to help with removing the magazine, which is present on the USP series. --commando552 (talk) 10:20, 25 January 2016 (EST)
I'm inclined to agree with you. I think that both are USPs as well. Actually, I think the second one with the suppressor is a USP Compact. And the director confirms that Ilsa uses both the SIG and the USP https://twitter.com/chrismcquarrie/status/633855331446222848 --Goondocks (talk) 11:27, 25 January 2016 (EST)

So after going through the movie frame by frame, here's what I believe happens: When Ethan Hunt meets Benji and Ilsa at the outdoor cafe, she initially shows him a suppressed HK USP or USP Compact. This is even more apparent when Ethan tells her to hold the gun against him after Benji removes the bomb vest. Then, as soon as the shooting begins, the gun switches to a suppressed SIG P226R. This is clear when the gun jams up on Ethan when he's shooting at the Bone Doctor. For some reason the armorers switched the gun. Had a couple of friends look at the scene as well and all came to the same conclusion. --Goondocks (talk) 16:45, 3 February 2016 (EST)

From the first shot, the pistol doesn't seem to look like a P250 upon close inspection, it looks like a USP Compact for me since the markings of the pistols are more of HK than the SIG one

The motorcycle rider pulls out his weapon.

AKS-74U rifles are being fired at Hunt.

The rifle that uses parts from an alto flute being assembled.

CIA operatives armed with the M4A1 enter a building.
Retrieved from "https://www.imfdb.org/index.php?title=Talk:Mission:_Impossible_-_Rogue_Nation&oldid=1256090"