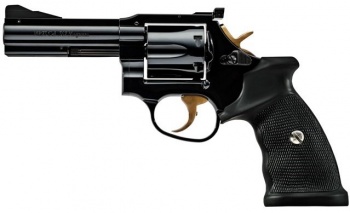 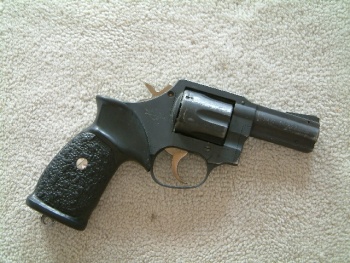 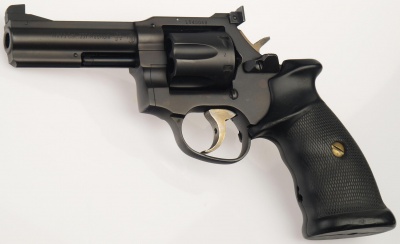 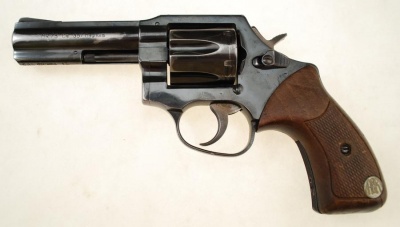 Got a Manurhin MR-73 today

Yes I am bragging

Well today after many years of looking and wondering how the hell I was going to pay for an Manuhrin MR-73 revolver I finally got one today. It's in 357 magnum and has a four inch barrel with adjustable sights.

The previous owner was a shooter (he passed a way a few months ago from Cancer) and there is holster wear to the finish, but it's a beautifully made revolver. Very high quality with a truly amazing action.All the research I've done states that the MR-73 is a hellishly strong revolver. Even stronger than the Ruger revolvers. Evidently it takes twelve days of handfitting at the factory before an MR-73 or it's smaller caliber siblings (32 caliber and 22LR) are shipped from the factory.

The blueing is so deep it's black in appearance. The cylinder and crane are designed to be removed with just the simple loosening of a screw. Which is nice for cleaning purposes. All in all it's a very well though out and handsomely made revolver.

Evidently the one I got (in it's current conditon) lists at $1,500 in the Blue Book. Brand new (if you can find one in the U.S.A.) would sell for somewhere in the range of $2,500. Well this is Southwestern Idaho not Houston or Miami. So it was priced at $900. Which is still pretty damm pricey. It's been in my local gunstore for approximately six months and I get the impression I was the only guy who was consistently eyeballing it. I guess the price tag and the fact that it's French drove people away.

Yesterday the gunshop owner said that since the owner had passed away it was now his and he wanted it to move. Which meant trade. So I traded a couple S&W .357 magnum revolvers and a 12 gauge shotgun. I didn't pay anything and the shop owner is happy. His inventory has been gutted by the recent gun buying frenzy and he would rather have several lower priced handguns that he knows will move instead of one fancy French handgun that will keep taking up space in his display cabinet for many more months.

I can always get another S&W revolver. So there you go. I go to the range Monday. The one in the photo has a three inch barrel but beside that it's an exact replica of mine to include the rubber grips. Think I'll buy the wooden grips from Numrich. I like to have a selection available. --Jcordell 00:25, 15 August 2009 (UTC) 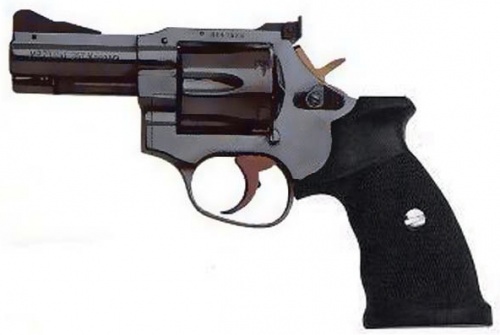 Here is my actual MR73. I'm fairly certain it's one of the ones that was used by the Austrian anti-terrorist unit COBRA and were shipped over to the U.S.A. after COBRA went to the GLOCK 17 in 92/93. Despite the holster wear it's a very nice shooter and very accurate. --Jcordell 17:17, 30 August 2009 (UTC) 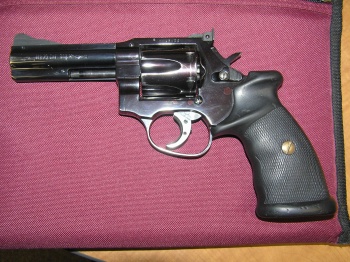 Do they have an importer bringing new ones into america?- -k9870

I want one. Especially the three inch with adjustable sights there, just looks cool-k9870

It is a great revolver. Expensive and very hard to get here in the U.S. And god help you if a part breaks. Because there are no spare parts in the U.S.A. But nevertheless I'm glad I have one. --Jcordell 01:22, 4 October 2010 (UTC)

From what ive heard parts breaking shouldnt be an issue......ive heard there the finest revovlers made, and unlike a korth live up to the hype.

The firing pin on mine broke. But mine is used and parts do go. Especially if this was one of the MR-73's used by the Austrian anti-terrorist unit COBRA. They shot their MR-73's hard and frequently. I was able to get another firing pin, but I had to go through a dealer in Stockholm, Sweden.That is another story in it's own right. He accepted an international money order and it had to be in Euros. Cost me $70.00 (to include shipping and handling via UPS) and boy was it complicated.

I did some research and spoke to the local ATF office. I was not breaking any laws by bringing in such a tiny piece, but I still had it delivered to a local gunshop. I wanted to make sure they had an FFL instead of having it delivered to my house.You never know in this day and age. Then once I had the part I had to pay a gunsmith to install it. Not cheap either. From when it broke to when I had it finally replaced took approximately five months! However now that it's all over it's still a great shooting revolver. However I really do wish somebody would start importing it again because if another part goes I'm going to have a really cool paperweight. I'm not doing that again. --Jcordell 16:22, 4 October 2010 (UTC)