Pretty sure that's a non gun. The "laser" is a weathered phillips head screw painted black with some silver showing, it holds the front end of the gun on, you can see the line that goes up along the "slide" where they remove the front of the non guns and put in the 5 or 6 flash caps. Also, pretty sure it's the Glock 19 non gun, not a 17. Too compact to be a 17.--James3 12:12, 4 April 2012 (CDT)

Detailed description of the Walther P38's Use in Seasons 2-6

Walther P38s are seen multiple times over the course of the series, starting in season 2. This is one of the only pistols correct for its time period in 1970s scenes. 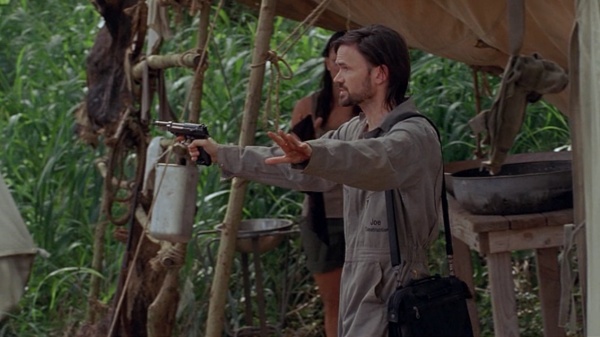 A Walther P38 is held by Daniel in Season 5's "The Variable" (S5E14). Note the finger on trigger, even though he's trying to convince the Others he isn't a threat.

Can anyone positively identify the weapon at the bottom of the page. It looks like a Browning design, but I am not certain. Axeman 06:26, 29 July 2009 (UTC)

The gun you guys said is a unknown isa as flashpaper version of a Walther PPK. User: Colt

In this episode, about thirty minutes (minus commercials) in, Jack escapes from his cell, and finds an armory. He loads a pistol, and holds it on Ben. What kind of gun is this? I think it might be a Walter P38, but I would like a second opinion before I edit the page. Acora 03:44, 28 February 2010 (UTC)

Who did this one?

Here's a comparison of the images (the ones currently on the page is on top and mine are on the bottom): 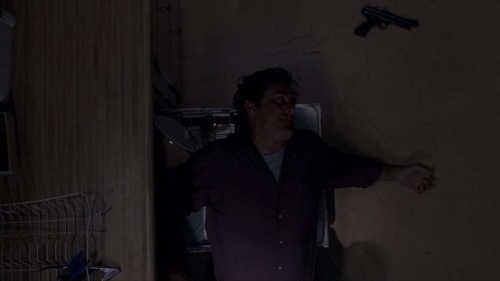 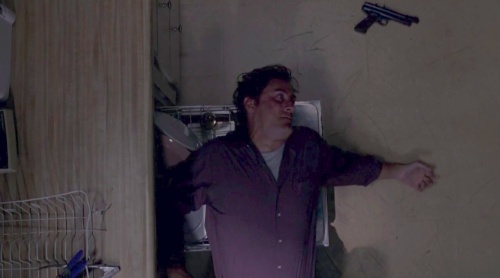 Your images are categorically not of better quality. The colors are over saturated and the people look like they are suffering from jaundice. This holds true for the pictures that you uploaded originally, as well (like Hurley at the motel), not just the ones that I uploaded and you tarnished. The colors in the pictures I posted are exactly like the original broadcast. You do know that they have professional video editors who refine these images to look exactly as they are supposed to look, right? Modifying them is a disgrace to the original product and a personal insult to me as I took much time to find exactly the right image before uploading it. I also find it disingenuous that you would use as an example the one image in which you arguably made clearer. Every single other one that you modified looks far worse than the original. This website is about exhibiting the firearms seen in films and that means showing them as the producers intended. Also, they leave the black bars in there because they add contrast. That is what the producers intended and that is why I leave them in.Axeman 21:06, 30 December 2010 (UTC)

The new images I've uploaded are either from the official dvd's or from a high definition streaming source. The HD source you've used still have black bars (which was not intended to be seen) and have the network logo in them. While that was what was seen on television, this is not how it's seen in other sources and this is not how it's preferred to be seen on the site. I also take great care in finding the right image as well and you might have not noticed, but I have a LOT more experience uploading screenshots than you have. --Ben41 04:07, 31 December 2010 (UTC)

If your images really did come from a DVD or your unnamed "high-definition source" then they wouldn't look as they do. Your images are inferior. If the black bars were not intended to be seen, then they wouldn't have been seen. As I said, they add contrast. Oh, and nobody is impressed by the quantity of the images that you have uploaded. Quality is all that matters, so drop your uncalled-for smug attitude.Axeman 06:36, 31 December 2010 (UTC)
Well, Ben41's "high-definition source" is likely to be Blu-Ray or an enhanced DVD as he usually uploads modified images from Blu-Ray and sometimes heavily-adjusted DVDS. Also, some of Ben41's screenshots for Lost don't look that saturated, but are just simply too bright. - Kenny99 07:58, 31 December 2010 (UTC)

Axeman, do you watch your shows on a 16:9 monitor or screen? Because then the show wouldn't have any black bars on them. You speak about the filmmakers' original intention; I believe the official DVD or Blu-ray is the definitive source for what they intended and that's where the screenshots are from. How I screencap is laid out on my page, so you can see how I take extra steps for the best possible image. --Ben41 09:03, 31 December 2010 (UTC)

The captain of the Kahana had a gun also. Can anyone ID this one near the bottom on the page? Looks like a Sig.

Follow up: I'm pretty sure it's a Sig p22x and probably a 220 judging by the width of the barrel.

Moved here because it is watermarked 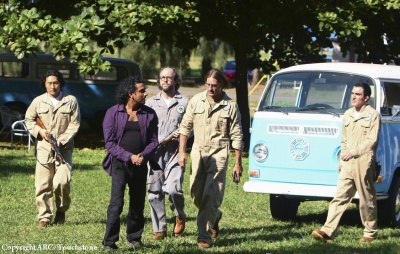 In the episodes "Namaste" and "He's our you" Stuart Radzinsky (In the gray jumpsuit behind Sawyer and Sayid) often carried a Remington 1100 shotgun while escorting Sayid. To the right Jin-Soo Kwon is carrying a Ruger Mini-14

In S1E21 "The Greater Good" two dudes are playing Half-Life and the stock-less SPAS-12 is nicely visible on the TV screen. Just wanted to mention it, I am not sure if it counts. (I suppose it does count if weapons seen on posters do.) - bozitojugg3rn4ut 08:56, 19 October 2011 (CDT)

I dunno, while "weapon seen in a videogame in a TV show" is pushing things a little, if someone got a picture of it we might as well ID it. I wouldn't see it as that different from, say, a poster which clearly shows an identifiable weapon in the background of a scene. I'd say it certainly counts if the guns on the guy's phone in Hawaii Five-0 do. Evil Tim 18:26, 19 October 2011 (CDT)