Information in the article (as of January 2014) comes from this trailer on Youtube: The Last Ship trailer

Based on a book it takes almost nothing from

If you're going to adapt a book (which I haven't read but am familiar with the synopsis), at least keep the core plot the same instead of stick-riding the title and a few names (like USS Nathan James). I expect a lot of the book's fans will be unhappy with this series. Spartan198 (talk) 08:06, 7 January 2014 (EST)

The JJ Abrams flicks are still Star Trek, though. He didn't dream up his own idea and simply tack the name on. And about the only thing Last Resort has in common with the book's plot is the crew of a US Navy ship left to fend for itself. Beyond that, there are hardly any parallels one can draw. Nuclear war is as much of a threat today as it was during the height of the Cold War 30 years ago, so there's no reason they couldn't have stuck with it. This show might as well just be Contagion: The Series, since it has a heck of a lot more in common with that movie than the book. Spartan198 (talk) 18:00, 1 June 2014 (EDT)
I read the book many years ago, I liked it. The show has little in common with the book, not even character names! Laqueesha (talk) 09:34, 16 January 2014 (EST) 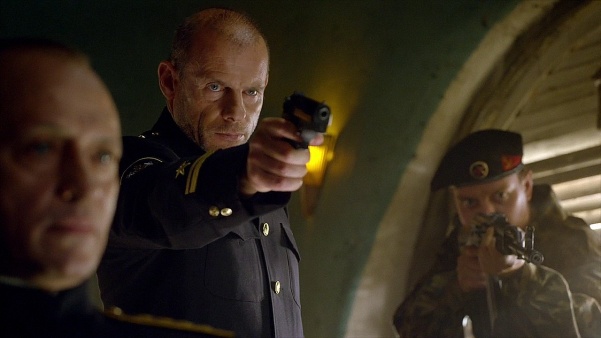 I seem to remember there was a proper side shot of it wasn't there? When he shoots the guy in the head possibly? I seem to remember thinking it was a Cougar of some sort but cant really tell from that cap. While I am here, I think the revolver is a 642 as the frame at the rear is the wrong shape, and more importantly you can actually see the hammer as opposed to on the 642 where it is totally hidden. I assume it is just a standard revolver that has had the hammer bobbed, which would probably make it a Model 60 I think. Also, I seem the remember that the guy in charge of the NMWU occasionally has a grenade launcher attached to his HK416 which I believe is actually a Spike's Tactical Havoc Launcher. I'm assuming they used this as they wanted something M203ish rather than an M320, but this cannot actually be attached to an HK416 so had to go for something rail mountable. --commando552 (talk) 21:07, 24 July 2014 (EDT)

Just noticed, do we ever actually see the anchor on the P226, or is this purely a guess based on the role of the character that is using it? Additionally, the pistol in the second cap has no rail so this one is definitely not a Navy.