I'm a little uncertain they're actually K98s the more I look at them. Can anyone identify them? I've tried Googling information of what weapons the Iron Guard used but nothing terribly helpful turns up. There seems to be very little information about the fascist Romanian military and its weapons. Kooshmeister (talk) 05:52, 17 June 2014 (EDT)

Uniforms, Equipment, And A Few Other Bits And Pieces

In the introduction to the film (written by MoviePropMaster2008) the following appears:

One of the details which drew attention from film buffs was its accurate (for the time) portrayal of the weapons and equipment of the SS and Heer units in 1940. Despite the glaring anachronism that the SS Allgemeine (the only SS division authorized to wear the iconic Black uniform with party armband) never operated outside the borders of Germany (this film takes place in the Carpathian Mountains in Romania), the uniforms, backpacks, equipment and gear of the SS and the Heer Soldiers showed a surprising attention to detail. Most World War II films up to that time had little accuracy when costuming any German forces.

The reason for this is the fact Andrew Mollo was the military/historical consultant on the film. Those that study Third Reich uniforms should be well versed with his name (he also wrote and directed the fictional film "It Happened Here" about what would have happened if the Germans invaded and occupied England). Mollo wrote the definative series (6 volumes) of books on the uniforms of the SS entitled Uniforms Of The SS. He also authored a number of other books on the SS (my favorite being To The Death's Head True) as well as some general books on Second World War uniforms (an excellent one being The Armed Forces Of World War II).

So one has to ask why (or how) a VERY well-versed author on SS uniforms could "mess up" and allow the black SS uniform to be used in the film (in the manner in which they were). Well, the answer is pretty simple...artistic license. I spoke with Mollo decades ago about this glaring error. Mollo told me that the director, Michael Mann, did not want to dress the SS in the same feldgrau uniforms of the Heer (which would have been historically correct). Mann feared that the average audience would mistake them for Heer reinforcements (or something to that effect) as most would not notice the subtle difference in insignia (between Heer and SS). Mollo went on to say that Mann wanted Woermann's men (Heer Gebirgsjaeger) to receive some sympathy from the audience and this might not be achieved if they thought Kaempffer's men (Sicherheitsdienst) were from the same unit (nor would they be able to tell them apart in some scenes). So the compromise was to break with history and outfit the men in the black SS uniforms (which were very correct in their design, insignia, and accoutrements - albeit out of place) which most people have always associated with the "evil Nazi SS".

Further, in the written introduction the film is set in 1941, not 1940 as indicated. Also, the submachine guns appear to be MP40s, not MP38s.

In the caption for the MG34 the "sentry" is not at rest. He is having a "nervious breakdown" (the best words I could come up with to describe what was happening to the soldiers in the film) brought on by the "evil" eminating from the keep.--Sgtmonroe 07:29, 14 August 2012 (CDT)

WTF? A sten? Are you serious Kooshmeister?

I was told that was what it was. - Kooshmeister

Heh, at the time I was kind of... virginal with regards to guns (and still am to some extent) and so I just took the word of what I considered more knowledgeable people at face value. Kooshmeister (talk) 05:48, 17 June 2014 (EDT)

I'm unsure if the two guns seen on the turret of Major Kaempffer's armored car are anything in particular or just mockups (the IMCDb says the vehicle itself is a replica).

Major Kaempffer rides into town perched atop the turret of his SdKfz. 222 armored car - mounted are the 2cm KwK 30 L/55 autocannon and the 7.92mm MG34 machine gun.

Also if the MG34 isn't actually an MG34 I apologize; that's what they're called in dialog ("MG34's cover the entrance"). - Kooshmeister

Where is the DVD of this movie? I've been looking for it for years. Where did you get those screenshots? I would love to pick up a DVD of the KEEP, but it's only available on VHS in the U.S. MoviePropMaster2008 17:39, 30 August 2010 (UTC)

Nonexistent, as far as I know. These are from an .avi file I downloaded off of Vuze. - Kooshmeister

Did some digging. Apparently it's a Laserdisc transfer. - Kooshmeister

Two reasons why this isn't out on DVD yet: 1. Paramount couldn't secure the rights to the Tangerine Dream soundtrack. 2. Mann has disowned the film and forced Paramount to not release it--John Ryder (talk) 17:45, 17 June 2014 (EDT) 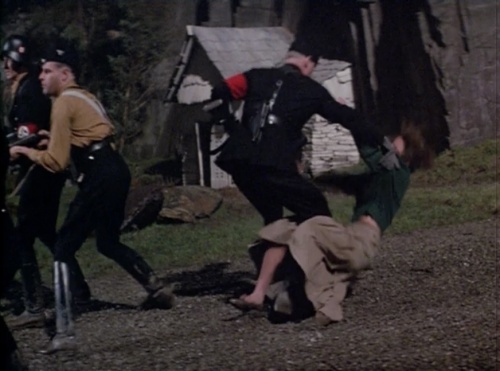 The adjutant shoves Eva down. 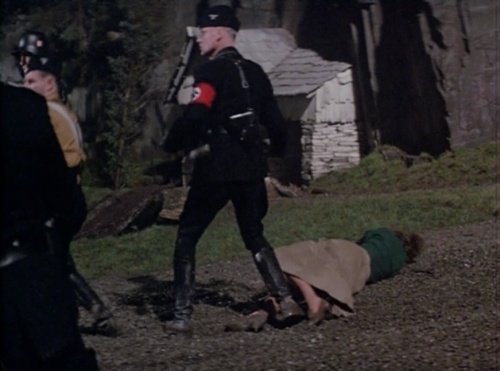 The adjutant turns back to the situation with Glaeken (Scott Glenn).

One of the SS soldiers (an uncredited Doug Robinson) inexplicably changes weapons and ammo pouches between exterior and interior shots during the scene where the Nazis come for Glaeken (Scott Glenn). He's seen behind the adjutant (Wolf Kahler). Although it's difficult to tell because he's mostly hidden behind his superior, he has an MP28. This can be seen in how he cocks the weapon, and by the side-mounted magazone seen sticking out from behind Wolf Kahler. Also, as he cocks it, you can see the large ammo pouches worn by the MP28-wielding Nazis. However, when the group moves outside, suddenly he's armed with a Karabiner 98k with appropriate smaller ammo pouches. And what's more, when the six of them (minus the guy Glaeken chucks down the chasm) return to the keep, in another interior sequence, he's been recast! He's a shorter and younger and missing some of the Doug Robinson soldier's medals, but since he has the 98k and enters with the other five men, he must be intended to be the same guy. ALL of the other guys' actors, guns and ammo remain consistent between the interior-exterior-interior sequences EXCEPT this one guy. Kooshmeister (talk) 05:27, 25 August 2014 (EDT)