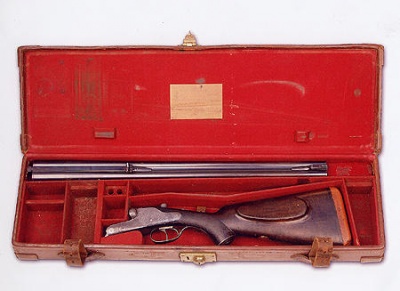 Lancaster in its carrying case

There is one more thing about having a double rifle or shotgun made for one by Holland & Holland, Westley Richards, Purdey, and so on. The price that one is quoted at the beginning might change. So say you order a double shotgun for $40,000 (more affordable than a double rifle don't you think?), but over the next couple of years there are dramatic economic changes. Sound familiar? At the end of those two years the shotgun might now cost you $48,000. If you want that shotgun you pay the fee. It's a rich man's world.I got this information from Dangerous Game Rifles (2nd Edition) by Terry Weiland. If you're interested in the rarified world of DG rifles I suggest you buy a copy of his book. Amazon.com sells it and I've seen copies for sale at Barnes & Noble and Borders.It's a fascinating read even for those of us who will never go anywhere near an African safari. --Jcordell 01:40, 12 April 2010 (UTC)

What measurements does the company take?

I'm sure it's nowhere near as customer-specific as, say, measurements for a suit or dress would be, but what kind of measurements does Holland and Holland take? Height? Weight? Something else? I'd think that the more attuned the rifle would be to a person's physical attributes at that moment in time, the harder it would be to sell to someone else, for the same reason you can't really sell a suit custom-tailored to your size to many people. Something like a person's weight can certainly change drastically within the span of a year, let alone two.

Do they also offer insurance in case the customer loses the physical capability to personally use the rifle while it's still being made? I'd hate to wait two years between placing an order for such a rifle and actually getting it, and say, losing a hand or an arm or even going blind before I ever get to use it. --Mazryonh 17:32, 2 August 2010 (UTC)

Your custom dangerous game double rifle. For when you win the eighty million dollar powerball

If you are going to have a custom double barrel rifle the gunmaker will look at many things. Barrel length, stock dimensions, overall weight, scope or no scope, Cast on, cast off or straight stock. Cheekpieces and forend shape. Sling swivels or not? What about recoil tolerance. Will you want recoil reducers? This is a big one and you have to have an answer at the beginning. The overall weight of the gun is important. If you are going to have a double in 500 Nitro Express then the weight is big. Normally a 500 double wighs about 11 pounds. However the English gunmakers can make it heavier or lighter. How much can you handle? A big 700 double will typically weigh 19 pounds.

Balance is essential. So is fit. A rifle that fits properly has better balance and seems to have less recoil than one that does not. Length of pull is critical as is drop at comb and heel. The straighter the stock, the more the rifle will come straight back instead of rearing up in your face. The longer the stock, the farther your thumb will be from your nose. Also, the less likely it is that your middle finger will be bruised by the trigger guard.

The length of your arms will be measured to determine the length of the rifle so that it can come to your shoulder naturally and find the weld every time. The rifle must be a natural pointer. It points naturally where you look like a fine shotgun. Which is important becasue a dangerous game rifle will be used at short distances (typically under 200 yards) and might be needed quickly - such as when a Cape Buffalo is charging.

The size of the hand is something to consider. Most makers measure your hand to ensure the triggers are correctly spaced and that your middle finger is not pressed up against the trigger guard. Having that finger hammered is a guaranteed flinch inducer.

Will you have double triggers or one trigger. What type of load will you be shooting. The rifle will be regulated for that load only. If you shoot a load with a shorter bullet or a heavier bullet or a lighter powder charge accuracy will suffer. Know your load.

I could go on, but I think that gives you a pretty good idea. Wieland says nothing about the shooters body weight. As far as cost and other money issues here is another quote.

The money involved, for the average individual, is immense. Most companies list starting prices at 55,000 British Pounds; at today's (2009) exchange rate, that is $88,000, give or take a few cents. Before starting work, most companies demand a third or even half up front, with more as the rifle progresses. The final price paid is the list price on the rifle at that time - not what it was at the time it was ordered, which might be as much as two or three years earlier. A potential buyer should insist on a written contract spelling out all the provisions regarding final price and how it will be affected by the exchange rate.

So if your physical condition should change? Well I guess you would have to take that up with the gun maker. Hope this helped. --Jcordell 18:34, 2 August 2010 (UTC)

That's what I've read. Of course for that type of money I would expect the rifle to be of outstanding quality. The local Cabelas used to have a Holland & Holland D/B 12 gauge and that was a very impressive shotgun. The quality/workmanship was amazing. And even though it wasn't made for me the balance and fit was astounding.Oh well at least I can look at the pretty pictures. --Jcordell 17:03, 19 September 2010 (UTC)

From the Holland & Holland website, it appears that the primary different models of the H&H double rifles are 'Royal', 'Royal Deluxe', and 'Round Action'. During my naming cleanup, I changed all captions into "Holland & Holland 'Royal' Double Rifle". I hope that it is possible to verify the models of the H&H double rifle images we have, but I am not informed enough on this matter to speak conclusively. --Wuzh (talk) 03:27, 10 July 2018 (EDT)