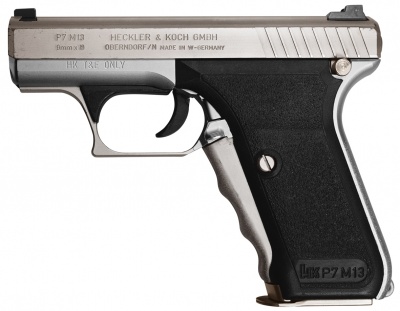 Hard Chrome Heckler & Koch P7M13 - 9x19mm. This is the screen-used firearm carried by Alan Rickman in the film Die Hard. Thanks to James Georgopoulos. 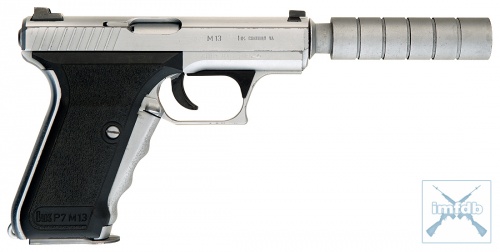 Screen Used H&K P7M13 with Suppressor (from execution Scene) - 9x19mm. This is the screen-used firearm carried by Alan Rickman in the film. (Photo by MPM2008) 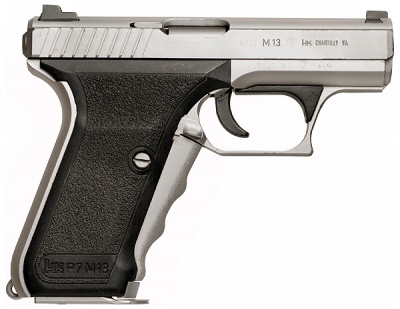 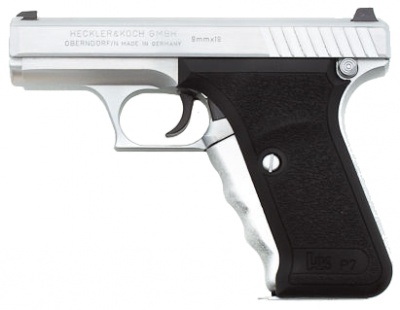 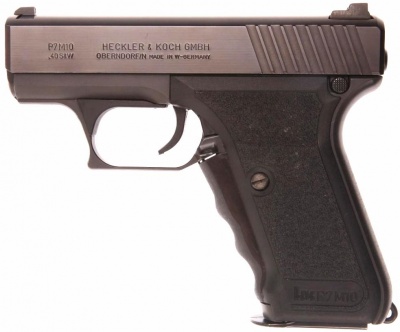 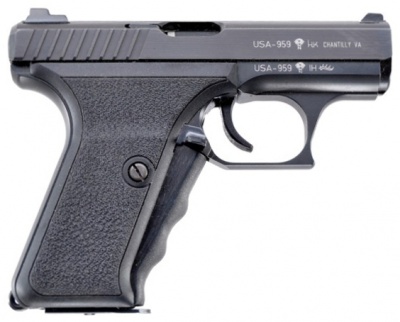 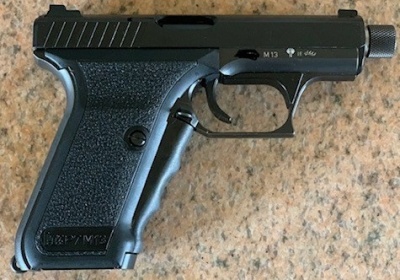 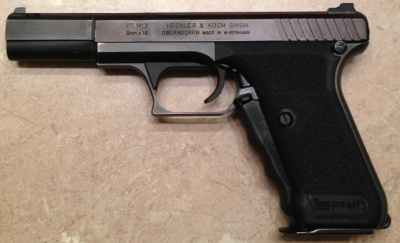 My favorite small sized pistol. I have used it as my bug for 11 years, and I know it's very reliable, light, and great at firing. I'd recomend it to all who seek a small reliable handgun.

How do you tell which variant?

Can anyone explain to me how to tell the P7 variants from each other? I can't tell the P7M8 from the P7M13 at all. Normally, high-capacity pistols are easy to distinguish from their single-stack counter-parts because they have bulges on the receiver where the frame was widened to accept a double-stack magazine (this is the case with SIGs, S&Ws, etc.) But P7s don't seem to have that. Anyone good at telling the P7s apart? -MT2008

You can usually distinguish each pistol apart by the grips. The P7M8 will have P7M8 on the grip itself. As well as the P7M13. In addition, the P7M13 will be significantly wider. -Hklenin

How to tell which ?

The M13 is wider a little bit, but are there any other differences between these two variants? How to tell which version the gun is if one cannot see the slide engravings nor the grips? - bozitojugg3rn4ut (talk) 15:12, 2 January 2013 (EST)

Can someone explain to me how the P7 can have a suppressor? Do they use special extended and threaded barrels in movies, or is there some trick to it. I've never held on in person so I just don't under stand it. Thanks.

If you wanted to suppress one in reality, you'd probably use an extended/threaded barrel. However, many movie guns have fake suppressors that screw not onto the barrel, but into it, screwing into the threading on the blank-firing adaptor. Also, please sign your posts by typing four tildes (these things: ~) after your post. Hope this helps. Pyr0m4n14c (talk) 20:48, 1 August 2017 (EDT)