Good job but I think the MK5KN is wrong, that is just an MP5K with a Navy trigger group. The MP5KN is an MP5K with the Navy group but with the longer threaded and lugged barrel found on the PDW. The PDW was actually developed from the MP5KN simply by adding a folding stock. --commando552 03:51, 31 March 2012 (CDT)

Varients of other weapons

While I know it's really a G3 varient I think that the Flemming HK51K should go on this page as it can be confused for a MP5K from some angles. 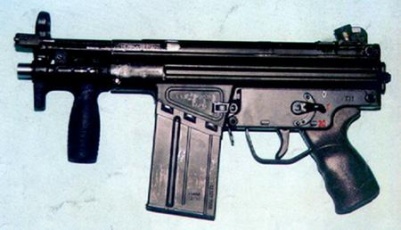 He's talking about the rest of the gun, not just the magazine; considering that the entire purpose of the HK51K seems to have been to make a G3 that could pass for an MP5 to a casual viewer, I'm fairly sure it would qualify under a subsection for things which resemble MP5 family weapons but aren't them. As below, it's worth including to explain it's a converted G3 rather than a converted MP5, even if it's more than slightly unlikely that anyone's going to need to ID a one-off weapon like the HK51K. Evil Tim 07:48, 4 May 2012 (CDT)

It's not an exact guide as like the other ID Guides it covers things that look like a MP5 and could be confused by someone who isn't an expert on these things Rockwolf66 19:52, 3 May 2012 (CDT)

This isn't a list of MP5 variants (we already have that), but rather a guide to all things that could be considered an "MP5" by the average person. If they see something that they know is an MP5, but not which model, then they can come here and use the glossary and descriptions to determine the exact model. Much like the HK94, the HK53 is not an MP5, but looks close enough to it to be confused with the real deal. However, I always defer to the mods, so off it goes.----JazzBlackBelt-- 00:06, 4 May 2012 (CDT)

It looks like an MP5 with a thicker magazine. I have no idea how you could possibly think it doesn't look like an MP5. On the other hand, the lead-in would need altering to include it, since at the moment it says "This page is intended as a guide to identify the various H&K manufactured MP5 variants" rather than "this is a guide to identify MP5 variants and weapons which could casually be confused for such." Weapons which aren't MP5 family (like the 5.56 MP5-alikes) would probably be better in a seperate table specifically saying they're not MP5 variants. It's a bit like if you had a table of raccoons and you included the red panda out of the need to point out it looks like a raccoon but isn't one. It would be very easy for someone to think that the HK53 is a 5.56 version of the MP5 rather than a shortened version of a full-sized rifle. Evil Tim 07:39, 4 May 2012 (CDT)

Okay, I did not know someone had added that into the mag section. My bad for not catching that. I am also revising the intro/lead-in to better describe the page and state that not all guns are MP5s. The HK94 and SP89 are not MP5s, but rather built off of the MP5 design. Anyway, we need a decision. I think that any gun resembling the MP5 in ANY way should be added. Other than the flash hider and thicker mag, the HK53 has the same design and build as an MP5. If the issue is caliber, keep in mind that we also have the 10mm and .40S&W as well. These identification pages are not meant to be technical, but rather designed for someone who has no knowledge of firearms beyond CoD.----JazzBlackBelt-- 17:02, 4 May 2012 (CDT)