I moved it under the Tokarev copy, because it has the lanyard ring on the magazine baseplate, the same straight slide serrations, and the sights are moved forward on the slide to accommodate the hammer because it is partially shrouded in the slide. --SmithandWesson36 05:13, 30 August 2012 (CDT)

In both of those images the pistol looks too short to be a regular Tokarev (compare the position of the ejection port along the slide and the length of the scalloped portion of the slide to a tokarev image and you will see the diference). Looks more like the size of a Zastava M88 to me. Anachronistic, but is the only "Compact Tokarev" that I know of. --commando552 06:30, 31 August 2012 (CDT) 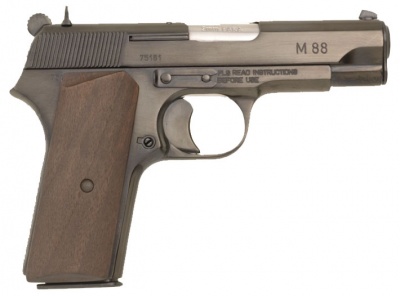 The pistol has the unique cocking serrations of the Polish Tokarev, though. They can be easily seen in the first pic, compare those serrations with the ones on the pic of the gun and they match, but I do agree that the pistols look smaller. --SmithandWesson36 10:27, 31 August 2012 (CDT)

I couldn't decide if it had the wide slide serrations or not, but think you are probably right. However, just to point out these aren't unique to the Polish versions, these were the standard serrations for all Tokarevs during the war, it is just that the only pics we currently have are post war guns. I think the only way to tell a wartime Russian pistol from a Polish one is by whether it has the star on the grips or not. --commando552 12:07, 31 August 2012 (CDT)

Good find, I'd go with that. The tiny little front sight also matches the one in the film. I've never seen one of these before is it actually made from a full size Tokarev by cutting it down or is it a reproduction? I can only find sites in Polish about it. --commando552 12:07, 31 August 2012 (CDT)

In Russian site where I found this photo they say that those gas pistols were made from real full size Tokarevs of Polish and USSR origin. Greg-Z 12:13, 31 August 2012 (CDT)

Actually I don't think it is an MPi-AKS-74NК as that has a longer barrel than this, being equivalent to the AK-105 but with the folding wire stock. Is this filmed in Poland? If so it could be a wz. 89 Onyxs which is a shortened variant of the Tantal, or it could be a cut down East German gun (MPi-AKS-74N or MPi-AKS-74NK, once you shorten the barrel there is no way of telling). Also, Pandolfini do you have any more shots from that scene, as the guy behind has a 5.45mm rifle judging by the muzzle break and gas block, but can't tell what it is without a look at the rest of the gun (my guess is a Tantal or an MPi-AKS-74N). --commando552 07:39, 30 August 2012 (CDT)

On photo below, second soldier from left, have rifle slung on his back. My first guess was Tantal (it's a Polish movie, isn't it?), but flash-hider looks like normal AK-74. Probably airsoft, or some non-gun, as AK-74s were never used/imported to Poland (civilian legal Saiga-MK would be a wild guess). Should we add it to the movie page? --Chris22lr (talk) 17:35, 8 August 2013 (EDT)

It would be possible to relatively easily change the muzzle brake on a Tantal to an AK-74 one, however that doesn't appear to be the case here. On the Tantal the forward bayonet lug is mounted at the front of the front sight block (due to the longer muzzle brake), whereas on this gun it is at the rear. Also, to me it looks as if the bayonet lug lines up with the back of the front sight like on a Romanian AK-74, rather than being mounted on a rearward extension like on a traditional AK-74. However the Romanian AK-74s have the older 45 degree gas block whereas this gun has the AK-74 type 90 degree one, so I am inclined to say that it is an AK-74 (or a replica or civilian version thereof), where my perception of the position of the front bayonet lug is being thrown off by the angle and distance of the gun in the picture. --commando552 (talk) 18:52, 8 August 2013 (EDT)