It's as much a UMP as the FD-99 from F.E.A.R. 2 is a P90; that is to say they just took the design and slapped a bunch of crap on it to make it look high-tech. It's pretty clear that it's a UMP with a bunch of embellishments. They even left the charging handle unaltered.--PistolJunkie 03:30, 1 March 2011 (UTC)

I have added two more guns - check 'em out and then share with us what do you think... and also there is a sniper which looks like an M82/M107. I don't know we should put it onto the main page or not? 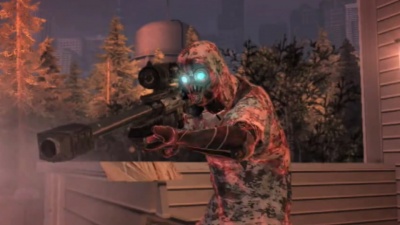 The sniper rifle in the game. 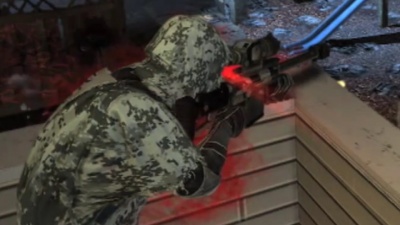 The sniper rifle in the game.

I'm not really seeing anything Barrett-ish in that besides the muzzle break.--PistolJunkie 20:47, 1 March 2011 (UTC)

The "B&T TP9" actually looks more like a altered [PM-84 Glauberyt] to me, maybe even hybrided (yeah, I know it's not a real word) with something else like a MP7 or Uzi. - Mr. Wolf

You mean "hybridized"? But you're right, those are definitely Glauberyts (is that the correct plural form for something spelled like a gagging noise?)--PistolJunkie 20:39, 1 March 2011 (UTC)

The real name of the UMP is call the Briggs SMG and the Vector looking gun is call the Rakow G3A? i forgot The last part it is an three round burst.

Rest of the guns

You guys play the game? What do you think about the other guns in it? Should we add them or not? I mean I don't really want this page to turn into "Crysis 3" where every gun is made of five different ones. The Briggs SMG and MP-970 are pretty obvious, but the other guns are purely fictional I think. Anyways, I can get images of them, I just really dont know what to do... - bozitojugg3rn4ut 16:00, 24 June 2011 (CDT)

It's more that the guns are getting into the "one weapon shaped a bit like three others" area. Also by god the pistol is a worse abomination than anything Alma's responsible for. Evil Tim 09:14, 25 June 2011 (CDT)

You should add some pictures of the bizarre shotgun in the game. The way it reloads sure looks different. Reminds me of a P90

I think they're going for the P90 with a flip-up sight mount (as per some older FPSes that were made by people who didn't understand how the mag was seated) crossed with a Neostead, only the pump is now just the barrel. It's certainly a unique weapon, I'll give it that. Evil Tim 18:25, 25 June 2011 (CDT) 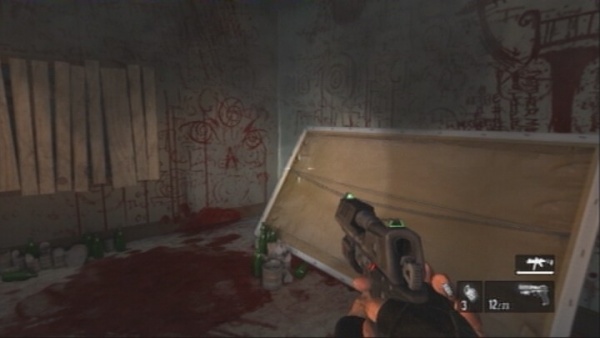 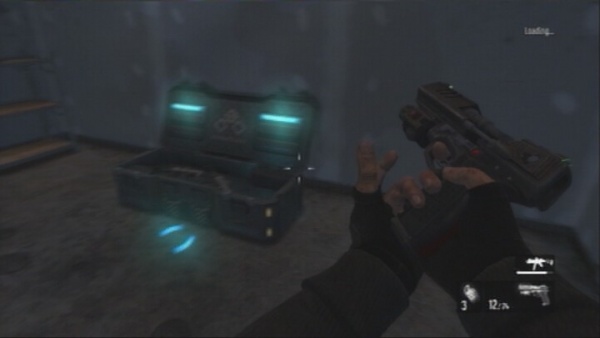 The slide never retracts beyond the back of the barrel, so some questions must be asked as to how this monstrosity actually operates. After we're through being sick.

I dissagree with the current page, the Strader is deffinently based off the Walther P99, more than the Jericho, it should be changed back to how it was.

I love how this weapon fires: the slide doesn't move at all in first person, just the hammer, meaning it somehow fires like a self-loading howitzer. There's also the abysmal trigger discipline, the fact it takes a "clip," and the fact Point Man and Fettel have both decided they're guest-starring in a Valve game. There's such a stunning lack of research being done in this game it's either sad or hilarious.--That's the Way It's Done (talk) 02:33, 10 October 2014 (EDT)

FEAR 2's CAWS-thing + P90 + Neostead + SPAS (in particular the magazine housing is a folded shotgun stock) + M26 MASS (standoff muzzle on barrel). I guess they got the idea from looking at a stock with a spare shell holder like the one on Sarah's Remington in Terminator 2. The weirdest thing mechanically is that as far as I can see the magazine has no follower. 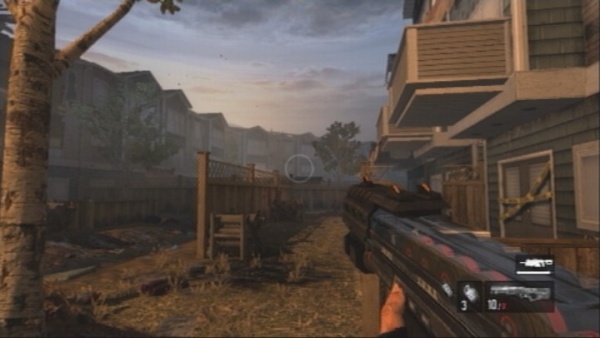 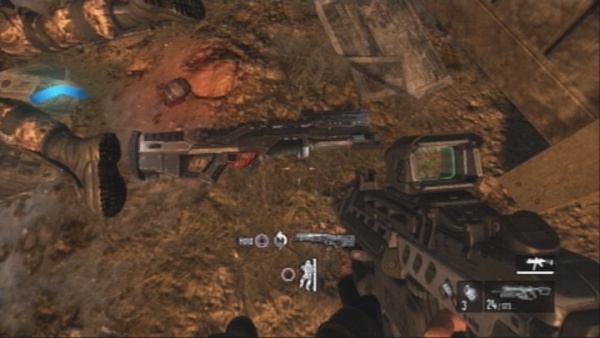 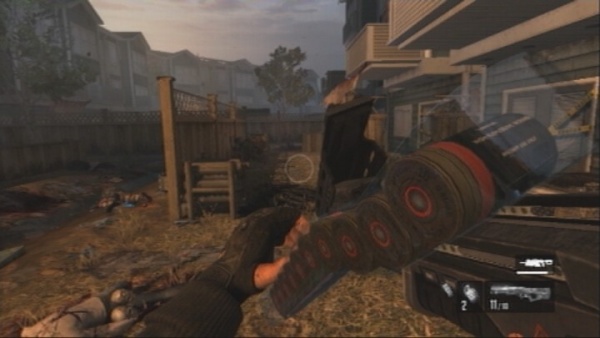 That, and both A, unlike Beckett, Fettel and the Point Main have never been trained to aim shotguns, and B, it doesn't seem to fire shotgun shells at all, but some form of grenade. God I hate this game.--That's the Way It's Done (talk) 02:30, 10 October 2014 (EDT)

Looks like it actually is loosely based on something:
http://www.thefirearmblog.com/blog/2013/06/25/monolith-arms-p-12-p-90-like-shotgun/
Watch the trailer to discover its radical ability to make stock videogame sound effects. Apparently it got canned when MagPul bought up Monolith, probably because it'd end up being NFA'd for looking scary unless you put a huge barrel extension on it and military / LE seem kind of apathetic about high-cap pump shotguns. Doubt FN would be impressed at ganking their probably-patented mag design, either. Evil Tim (talk) 17:51, 20 February 2015 (EST) 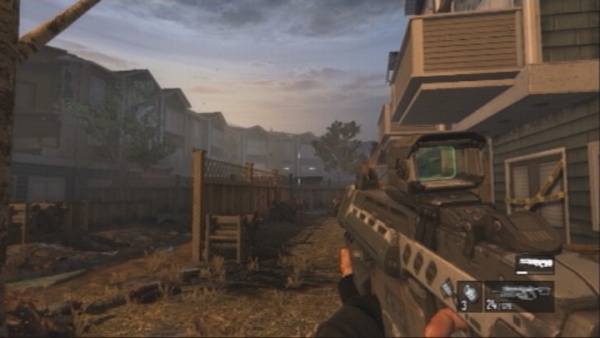 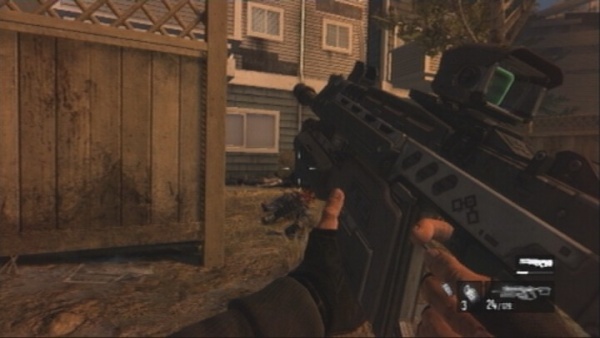 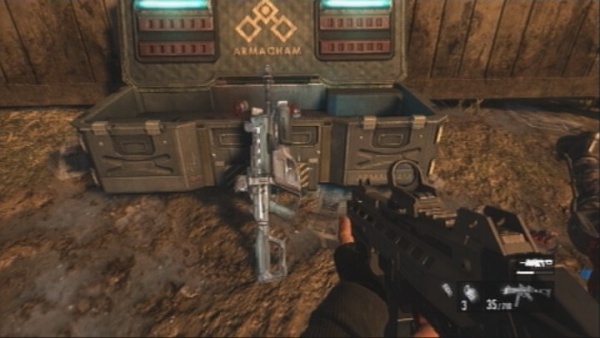 Pimp My Gun has a lot to answer for. 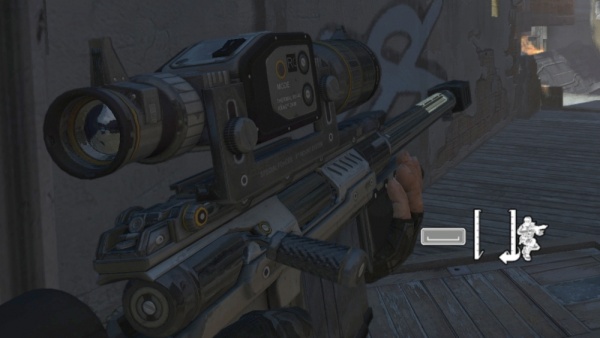 The bolt suggests that this is a bolt-action rifle, however is semi-auto.

Yeah, last time they told us a bolt-action rifle was semi-auto, this time we have an obviously bolt-action rifle which is semi-auto. You can't win, can you? Anyway, the bolt and top of the stock have some of that Cheytac Intervention feel to them (with the bolt handle fixed to what would be the middle of the Intervention's bolt), a very Barrett-y barrel and giantass magazine, and a free-float to the barrel based on something like the Blazer R93. Evil Tim 04:16, 26 June 2011 (CDT) 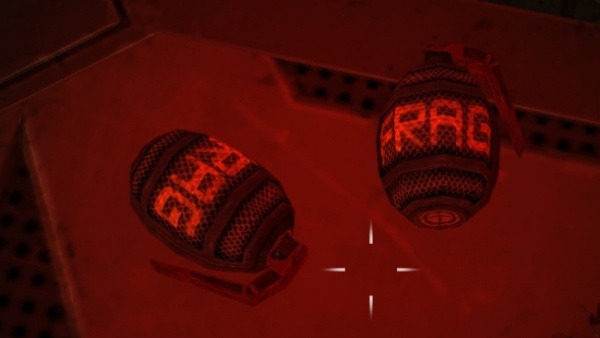 Plushie grenades? Also, the Shock Grenades look like they're the Thermal Detonator Luke pulled out in Return of the Jedi. Evil Tim 05:14, 26 June 2011 (CDT)

Well, your PC screencaps are a lot nicer than my standard-def PS3 grabs, so feel free to grab the GAU-19. We could also use new shots to replace the first two of the UMP-thing, those preview grabs are really ugly. Evil Tim 04:13, 26 June 2011 (CDT)

Some of them are kinda nice to look at (I'd have capped the rest, but I'd have to exit the game, switch from HDMI to SCART and then play that way, and it's not as nice to look at then) but yeah, the general standard is swinging way towards a hurricane in an aftermarket gun parts warehouse rather than "this is X with the stock of a Y." Also, regenerating health now, 2 weapon inventory, no armour, no medkits, no reflex boosters...It's FEAR only because it's got the characters from FEAR in it. :( Evil Tim 00:18, 26 June 2011 (CDT)

Although most of the designs of the weapons don't make much sense, at least they're interesting, kinda cool, and easy on the eyes. The designs are not enough to ruin enjoying the game, *cough* like *cough* Far Cry 2 *cough*. - Mr. Wolf 14:31, 27 June 2011 (CDT)

Also: the trouble with FEAR is it should never have been a series; the ending of the first game basically wrapped up the whole mystery of what was going on, and so Alma changed from a weird little apparition who turned soldiers into man-sushi for reasons you didn't understand to part of a genetic engineering project so entirely stupid it made Les Enfants Terribles look well thought-out. Making FEAR 2 was like if Shyamalamadingdong had made Sixth Sense 2 and still used the same Bruce Willis character with the same premise and foreshadowing, only everyone knew what he was already. Evil Tim 03:46, 4 July 2011 (CDT) 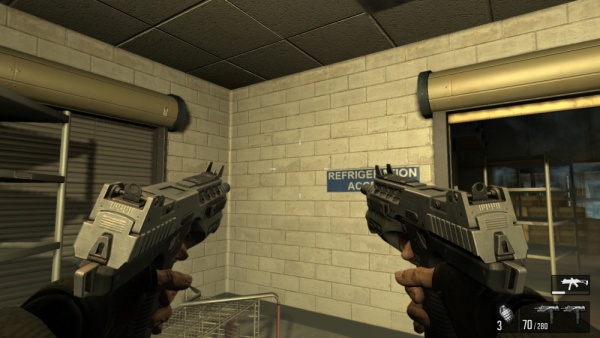 Trace from the cocking serrations forward and watch as the raised frame drops into a low rectangle. Why of all things would you put the slightly altered slide of a Desert Eagle on an SMG? There's even a cocked hammer at the back there, though it looks like they're trying to sell it as a sling attachment point. Also, those holes at the front are totally the PCAP accessory sockets from the XM8 series. I see we're keeping to the well-established series standards of weapons with features that don't make even the slightest hint of sense. :D Evil Tim 03:06, 25 June 2011 (CDT)

IIRC FEAR was around the time that H&K and Glock realised they could trademark the shape of their weapons, and thus around the time that MP5 clones in videogames started to get more abstract (or turn into knockoffs like the MP10) or started to get official licensing. I guess with the G2A2 they wanted something that looked near-futuristic for the Replicas to use, but didn't want any of the usual suspects. Better that than another XM8-thing. Evil Tim 02:48, 26 June 2011 (CDT)

I can't say I'm seeing it either, or any particular amount of TMP-ness in the dual SMGs aside from the grips. Like I said, the majority of the addition to the Gauberyt is a giant Deagle slide. Evil Tim 19:02, 27 June 2011 (CDT)

Does anyone see the screencap for the UMPs the ATC folks are carrying? Those handguns don't look like the Strader to me; they look more like the USPs from the first two games. Anyone concur?--That's the Way It's Done (talk) 02:28, 1 November 2014 (EDT)