Screencapped and added a SHIT TON of new images, all in 1366x786 High Definition! Enjoy! GamerfreakB7

This is the image in question; it's too blurry to use in the article, but he's definately missed the bolt release. 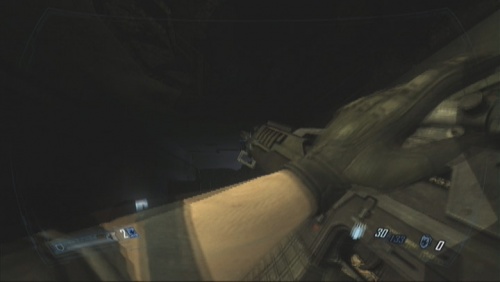 Yeah this game apparently missed a lot of things the first game had like the sense of real fear and suspense. Instead we get another action horror and not even that much horror. In the first game, you do get shock and sometimes creeped out. In this game, all it does is use cheap surprise scares to try to pull you in. Excalibur01 16:18, 28 July 2009 (UTC)

Some other weapons similarities:

The pump-action shotgun is much closer to a tactical modified Remington 870 than a Benelli M4.

- I've always thought so too, but if someone does change it, do take note that the stock is an OBVIOUS copy of the Benelli M4 collapsible stock. GamerfreakB7

Likewise the assault rifle is based on the H&K 416 or perhaps some other gas piston M4.

The semi-auto shotgun is based on the H&K CAWS.

The missile launcher is based on the FIM-92 Stinger.

Has NO ONE played multiplayer? One of the weapons available for use is a ported "Baksha ASP Rifle" from the first game, renamed the "Kohler and Boch IDW-15 Semi-Auto Rifle" and fires in Semi AND Burst. Did NO ONE catch that? And now, I can't edit the page (kind of ironic since I was the guy who CREATED IT when I first played the Demo). Anyone wanna take care of this? GamerfreakB7

I don't see any reason why you can't edit the page. I tried to edit it seconds ago and it didn't try and lock me out. Also, do you happen to have images of it ready to upload? If possible, you can up it, link me the uploaded images and I can help you write the entry onto the page. --HashiriyaR32 22:49, 29 March 2011 (CDT)

So I edited the page, added in the K&B IDW-15, plus a few other details about the other weapons, but I come back to find them all gone! At first I figured they might have been pending approval from a moderator or something, but two or three weeks later, I think they just got outright deleted! What the hell, people? Oh and PS to HashiriyaR32, turns out when I tried to edit the page, I wasn't logged in! :/ Oops... GamerfreakB7

I don't see any edit in the log that has your addition for the TAR. Try adding it back in, with those shots that you have of it. I'll try and keep track of that edit (just write something distinctive in the edit notes so we'll notice it). --HashiriyaR32 22:42, 27 April 2011 (CDT)

Forgot to crank up my brightness settings! :| Sry! GamerfreakB7

Well, page which have ALL guns fictional shouldnt be here anymore. Anyone else who agrees with deletion ?

I'm curious as to when the Galil ACE rifle went into production, because it's got a positively uncanny resemblance to the assault rifle in this game. http://world.guns.ru/assault/isr/galil-ace-e.html --Raven 23:10, 29 July 2011 (CDT)

Look at the selector of the sniper rifle. It has Manual, Auto and what looks like Cease settings. 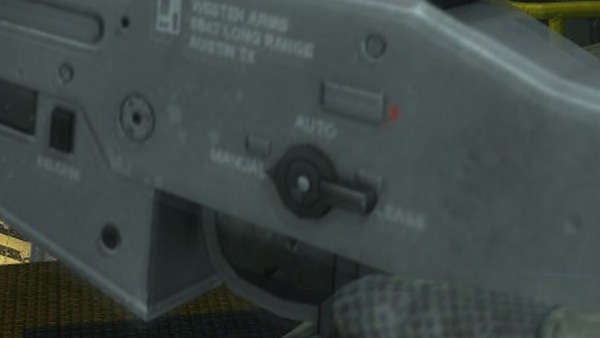 Maybe the devs wanted to make a semi/bolt-action combination rifle, you know like a semi/pump shotgun. Different operation principle for different types of rounds. Just a theory... - bozitojugg3rn4ut 13:14, 12 October 2011 (CDT)

I think they just copy-pasted the text from "RELEASE" below the mag release. Also, Yak-B gatling on those Replica Hind-D helicopters that turn up near the middle of the game, I'll get one if you don't. Evil Tim 19:16, 17 October 2011 (CDT)