What are the girls doing in the censored screenshot? Just making out? Do we really have to censor that? It's probably borderline SFW, but still SFW. --Funkychinaman 18:10, 20 May 2011 (CDT) 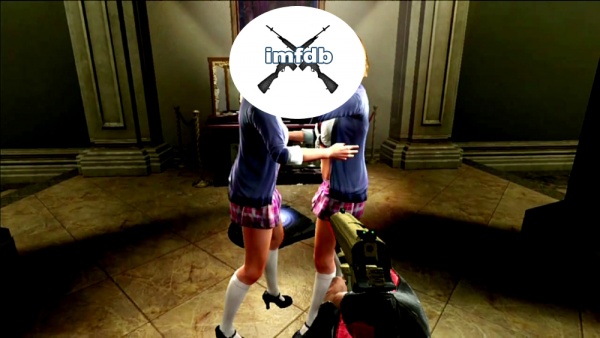 Duke 'bout to collect his reward.

Yeah, unless there's something weird between the two of them, something that two people can do in public in real life without being arrested isn't something we should censor. Evil Tim 05:09, 21 May 2011 (CDT)

You are right, Tim. I don't know why was this image moved from the main page. With the censored part there is no reason for keeping it on the talk page. bozitojugg3rn4ut 15:44, 21 May 2011 (CDT)

Yes, but it doesn't need the censored part, and having it there makes the site look rather overly prudish. If it's what it appears to be (ie, just the two of them), there are racier things shown on billboards. Evil Tim 06:58, 23 May 2011 (CDT)

Am I the only one who thinks that 3 (or maybe more) developer studios, a crapload of dollars and 15 years were not enough to create something outstanding? I mean, the game sucked monkey balls. Serious Sam is way more fun and funny, at least for me. - bozitojugg3rn4ut 15:58, 20 September 2011 (CDT)

Absolutely right. Borderlands is a great game, but is more like an RPG, you know with looting, leveling and buying and selling and stuff like that. Furious Four looks like Inglorious Basterds to me, and I really hate that movie so I won't look forward to it. There is also a "secret" project on Gearbox's page, I wonder if it is the game remake of Heat. That would be cool. Especially if Mann is also involved. - bozitojugg3rn4ut 10:05, 23 September 2011 (CDT)

OK then. Some time after Furious Four is released, Borderlands 2 will be released. And there are rumours about Borderworlds although I can't find out whether that's codename/subtitle for Borderlands 2 or separate game in the series (kind of like expanded universe). --Masterius 13:27, 23 September 2011 (CDT)

I guess I'm the only guy on here who likes Duke Nukem Forever. Oh well, I thought the game was really good when I played it, and I felt that it had the right amount of pop culture, movie, music and videogame references, hot women (especially in the 'Titty City' strip club level... heh, heh, >:D), good alien ass-kicking, a nice touch of interacting with various objects and characters in the environments throughout the levels, naughty moments, and some of the best and funniest lines delivered not only by the secondary characters of the game, but also by the man himself; Duke Nukem. Sure some of the mechanics of the game could have been better, the loading screens take a little bit too long on some occasions, and some other areas, characters, graphics and a bit of the plot in the game could have had a final polish before it went out the door (such as why the aliens chose to come back, what is their endgame to invading Earth again, and why every single damn captured woman in the Hive level constantly has alien babies bursting out from them, often forcing the players making Duke kill them first before that happens, and not having Duke be so remorseful about doing that like how he was in the last game, but instead cracking a joke or two after the players make him kill an alien-impregnated woman or if they die first when the alien offspring burst out). But for what it's worth, I really enjoyed Duke Nukem Forever and I think it's a good game, definitely something that should go on the list of 'Top 10 Videogames of 2011'. But for a 15 year wait, I guess you can't please everybody. --ThatoneguyJosh 20:12, 10 October 2011 (CDT)

You may very well be. DNF just can't compete with today's Modern Warfare, Battlefield, and Halo (if anyone still plays Reach, ugh). Duke Nukem was fun back in the day, when it's main competition were games like Goldeneye and Turok, but the people want more realistic shooters and more serious, story-orientated games.Lurker McNasty 10:24, 11 October 2011 (CDT)

And if you like classic shooters, DNF sold out to the point it isn't one. Most of the "humour" doesn't work because the world is so focused on stroking Duke's ego it isn't even funny; it's like Johnny Bravo with everyone pretending he isn't pathetic for some reason. Shadows of the Damned managed juvenile humour far better because it refused to resort to worshipping Garcia Hotspur; he's allowed to be a big dumb lug. The mechanics don't work either; Duke is a wuss with two puny guns and hardly any ammo who can barely take any punishment at all, and the enviromental interaction comes down to playing with random objects in the hope of getting a reward which the game is designed around you getting. Evil Tim 10:41, 11 October 2011 (CDT)

It really is sad to see how far Duke Nukem has fallen. It's kind of funny to see all the jabs and insults the game throws at other fps games like Halo, Half-Life, etc, and yet the game pretty much stole half of its gameplay from those same games. It's like stealing someones Ferrari then sending them pictures of you not knowing how to drive it at all. Lurker McNasty 11:46, 11 October 2011 (CDT)

I neverreally got this arguement. What did Duke Nukem steal besides regenerating health and 2 weapons? If that's what you guys are going to criticize, then I might as well call out Duke Nukem 3D for insulting Doom despite Duke 3D having many similar elements to Doom (large amount of enemies, many secrets, key card hunting etc.). Duke Nukem was always about the character, and the humor that he brought to the game, and Duke Nukem Forever succeeds in that regard. After all, I'd be hard pressed to find any other shooter that has a non-serious main character (The only other one I can think of that still has games today is Serious Sam). In this glut of uber-serious shooters, Duke Nukem Forever is a breath of fresh air. -- Anonymous Editor

Physics gimmicks, driving gimmicks, ridiculously overpowered melee moves, general level design, ammo capacity limits, low player health (Duke laughs at armour even though Master Chief can take *way* more of a beating than he can and even though Duke wore armour himself in the last game) infinity crate + rocket launcher bosses...Also, Duke isn't funny, and the good-natured ribbing of Duke 3D (a fairly good game) isn't the same as Forever hurling insults at games it isn't fit to lick the boots of. It's not an old-school shooter because it doesn't have the enemy design, level design or weapon design down. It's a badly designed chimera combining every bad idea from 15 years of first-person shooters. Evil Tim 22:37, 4 January 2012 (CST)

I actually beat the entirety of Duke Nukem Forever for a (sadly lost) text-based LP on a forum I used to be part of. It's a pretty substandard game just on its own merits (to say nothing of making people wait over a decade for something that's the quality of a budget title from an unknown Russian studio), but it doesn't help that it constantly insults (not just mocks, but actually insults) modern video games while shamelessly copying many of their tropes and conventions. Beating the entire game in 14 hours was downright painful, and only my ability to make fun of it and point out its flaws the whole way through kept me from throwing myself out the window. Chitoryu12 (talk) 00:59, 2 October 2013 (EDT)

Don't recall playing any of the games, and never really payed attention to the series or character. But does his country of origin ever come up? I ask because in the second to last cap it shows Duke in Canadian Forces gear. While I'm quite sure they just Googled "soldier", picked a random image and photoshopped Dukes face into it, I'm curious if he is actually supposed to be Canadian.--Crazycrankle (talk) 05:21, 2 October 2013 (EDT)