This looks great! It's awesome that we now have all five "Dirty Harry" movies screencapped and in good condition, given the popularity of these movies. -MT2008

I know, I'm glad be have another series to brag about owning. And they don't have low res shots anymore! I'm glad I'm done though, I have more Eastwood films to do. - Gunmaster45

One of the props on the set of Peter Swan's (Liam Neeson) new film is a high-powered Harpoon gun, which for unknown reasons actually fires harpoons. On real film sets, deadly weapons are typically avoided for obvious reasons. At the end of the film, Insp. Callahan (Clint Eastwood) uses the Harpoon gun to kill Harlan Rook (David Hunt), after he runs out of bullets. Members of the band Guns N' Roses make a cameo appearance as the crew firing the harpoon during the movie within a movie. 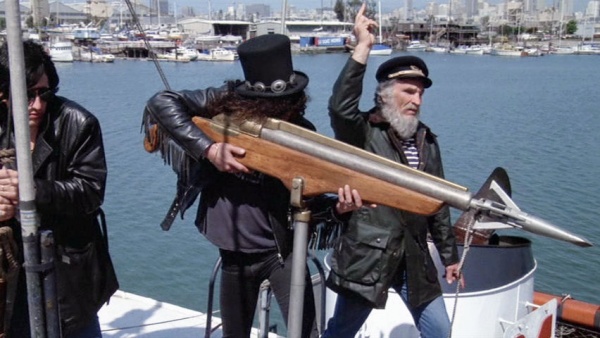 One of the actors prepares to fire the Harpoon gun in Swan's film. The "actor" seen here is Slash from the band Guns N' Roses. The entire band was invited to make an appearance in the film as their song "Welcome to the Jungle" was prominently featured.

"You're out of bullets. And you know what that means? You're shit out of luck."